Preview of our Jan/Feb Feature “The World of Nymphing: Part One”

Nymph fishing has evolved from the simple practice of fishing a sunken fly into a myriad of different nymphing methods from around the world. Nowadays, you are likely to hear about European methods such as Czech, Polish, French and Spanish nymphing, but there is also the New Zealand nymphing rig and the American methods such as high sticking, Hewitt and Brooks. Many anglers explore and experiment with these methods primarily to catch more fish, but the process of experimenting with these many styles of nymphing is rewarding in itself.

“The World of Nymphing”, will cover European methods in Part I and Part II will review those from other areas of the world as well as how to apply them to suit fishing in British Columbia waters.

You cannot talk about nymphing without mentioning G.E.M. Skues (1858-1949)…(continued in the Jan/Feb issue of BC Outdoors).

…Sawyer is more known for the venerable Pheasant Tail Nymph, arguably one of the most widely fished flies around the world…(continued in the Jan/Feb issue of BC Outdoors).

The success of the Czech and French in fly-fishing competitions brought a lot of attention to the approach taken by some European anglers…Very few know that Czech nymphing actually is an adaptation of Polish nymphing and that these two nymphing methods are very similar…(continued in the Jan/Feb issue of BC Outdoors). 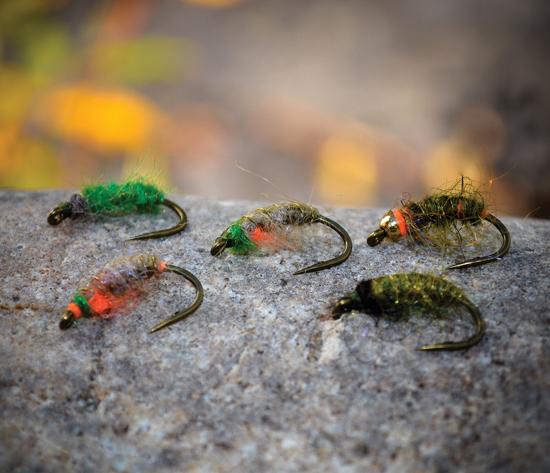 Nymph tapping is a recent adaptation of Czech nymphing by Paul Davison from England. This method evolved as a response to European grayling’s ability to take a fly and let go of it without you feeling the strike or seeing the line move…(continued in the Jan/Feb issue of BC Outdoors).

The French found that pulling small flies through shallow water with long leaders and long rods to be most effective…Spanish nymphing shares some similarities to French nymphing. Some anglers have referred to Spanish nymphing as Czech nymphing done at long distance…(continued in the Jan/Feb issue of BC Outdoors).

Some of these nymphing methods have been touted as the latest and greatest method for immediate success in almost any fishing situation. The reality is that the different European nymphing methods were developed in their respective parts of the world for specific situations and purposes: to get the fly down to a fish holding in pocket water or for fooling highly selective fish, for example…(continued in the Jan/Feb issue of BC Outdoors).