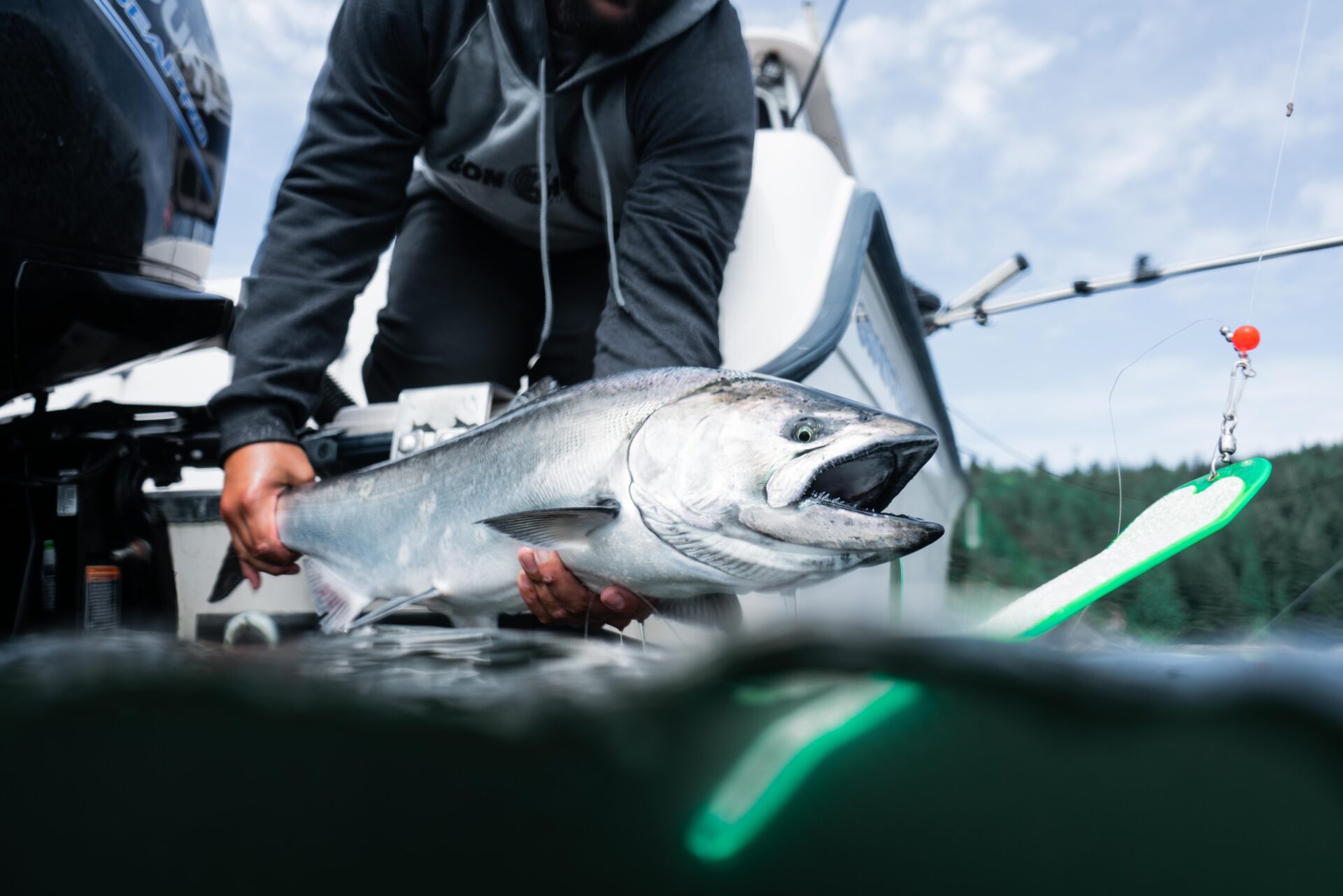 Saltwater trolling in Port Renfrew is accurately summed up by two words: big and close. When you fish for salmon, big is a word you want in the top two, as the first requisite is big chinook. But there are other bigs: big water, big trees, big (huge) coho and days so long they are also big. But do remember to check the fishing regulations, as 2021 promises to allow you to fish for big fish – that’s chinook – but not retain them until into July. Check DFO.

As for close, the main point is that this remote, untouched fishery is an hour-and-a-half drive west from the capital, Victoria, to downtown Port Renfrew – the closest of all remote water in BC. And it’s a nice scenic drive out high over Juan de Fuca Strait. And it is even closer if you want to fly in from Vancouver. A round trip flight to the harbour is $150 to $200. And it solves that problem of having to bring a car across a ferry to the Island and go back the same way, something of which all non-coastal Canadians and Americans can take advantage.

Owen Point across the bay is one of two big ledges for big salmon close to town. And in fall, those coho that are not only big – into the 20s – but the biggest on the island, give you a chance to catch them in San Juan Bay and then under the bridge, around the corner from the Pacheedaht First Nation; this is because the river empties into the ocean a scant 100 yards below the bridge, and that, of course, creates a pinch point that all the fish must pass through to carry on up the San Juan River. The Gordon River is just a few more clicks across the delta and turn left for the boat docks and another bridge.

Each side of Port San Juan has a prominent corner and thus good structure. And let me give you a tip that applies all along the coast and also in rivers: salmon and most other species of fish are found in relation to structure; typically, ahead of, beside or behind. What is important is a cul de sac or back-eddy, where the fish, even without aiming to, are carried around in a circle in this space. And their prey, herring, sandlance and so on, as smaller fish, are also carried in this water; their feed, typically plankton, have no directional power, as the currents are stronger than they can swim against, even if they had the brain power to want to – they don’t.

Owen Point and Cerantes Point are the two entrance features on opposite sides of the harbour. As the salmon are coming home to spawn in summer, the Owen Point side, which has a ledge that runs several miles to the west and Camper Creek – this is where the salmon are coming from – at 40 to 60 feet deep. So, it is the predominant of the two sides, which are, yes, close to town by boat.

From mid-May, the Columbian chinook, actually from BC rivers, mosey by as girthy fish of 20 to 50 pounds, as in big, with the occasional fish even bigger. Following these, the Fraser runs move past en route to the mainland.

Cerantes is the local groundfish grounds. Now, all those chinook swim by Cerantes as well, but there are so many groundfish, they glom the bait as soon as possible, and so the Owen Point run is used for chinook and coho fishing. Note that for coho, they are carried along in the tideline that runs east/west, from one to four miles offshore, and thus are fished there. Note that sockeye are 60 to 100 feet down, and it is common that the coho in the first 30 feet will whack the lure before it gets down to the sockeye.

Also of great joy to anglers, the last two hours of the flood is the major bite period, even out-fishing the crack of dawn. So, if you don’t want to get out of bed, you can still have the best fishing of the day for the biggest chinook, only 15 minutes from the dock.

Multiple runs pass these points on their way home – it is the first place that chinook come onto shore (they do this to begin detecting the smell of their river); this includes Puget Sound and Fraser fish, as well as Sooke Basin and Cowichan River. In particular, the Harrisons pass in September and provide the largest salmon of early fall, with legitimate 40-plus pounders every year. You can tell them by their predominance of white flesh.

The whistle buoy midway between the points is considered the edge of remote water, and is where the sockeye, pink and coho are caught, also still retaining their remote, bitey behaviour.

Chinook fishing starts on Owen at 15 to 30 feet deep, and then, if fishing east, to the 60  to 80-feet contour progressing east to the whistle buoy until 120 foot depths are reached, and turn back to Owen. Another tip, for all waters, really: fish with the tide not against it, as you want to fish the most water until you find the fish. Then go in circles to maintain contact, or motor back upstream and put your gear in the water again.

If the fish prove reluctant, try, for your second morning, a run west to the Nitinat Bar. The hatchery puts out enough chinook to return 10,000 to 20,000 adults, all of which are aiming for this one opening. Do note that the current and wind often combine to provide unfishable swells, so, again, you will want to go early in the day rather than later. These fish peak in August in the saltwater approaches, which includes San Juan Bay spillover fish of primarily 20 to 30-pound fish. If you catch larger fish, they will be Harrisons or five-year-old Nitinat females.

Now, to fish the best remote halibut grounds, yet closest to town, your open-ocean fishing takes place on Swiftsure Bank some 13 miles offshore. As it is roughly an hour out, and the calmest water is early in the day, yes, you will be getting up early for this fishery as well.

But it really is worth getting up. I have done this fishery more than a half dozen times. And every time, every fisher on board has gotten their limit of halibut. That is the reality of this close remote fishing, if that’s not an oxymoron.

And while bottom bumping that anchovy and its lead ball on the bottom, 150 to 250 feet down, I had an odd experience. My line started tugging away, but not with the strength of a halibut. I left it down for a while, got my halibut bite and started reeling in. Oddly, when I still had 50 feet of line out, up came a coho that had trussed itself up like a little chicken in the line so it could not get out. I brought it on board, and yes, there still was tugging on the line. Reeled to the boat and the halibut on the end, much larger than the coho, was brought into the boat. One line, two fish.

One more thing: Swiftsure is far enough out in the throat of Juan de Fuca that it also has all the pass-by chinook and coho bound for US rivers all the way to the Sacramento. So, when the boat is full of halibut, the lines come up and are rigged for salmon. If you are bringing your boat, don’t go out without a full range of GPS, radio and radar array, and in the company of other boats.

Add one thing: The salmon are usually in such numbers that there is no need to go offshore to catch them. They are simply a secondary catch while fishing for halibut.

For chinook salmon on the Owen Point run, try anchovy in a white, translucent or pale green head that is wire-rigged, with a glow or Madi flasher. For coho, trail a short cutplug that is quicker than the 1.5-second flop roll for chinook. Sockeye prefer red or glow orange hootchies with mylar inserts and 42 inches to a glow flasher.

For plugs, the west coast favourites will do you well in these waters: 158, 602 and 700. For spoons, try Coho Killers in white or translucent green. If fishing is slow, bend the spoon. Because the San Juan River coho are the biggest on the west coast, fast trolling of bucktails when the fish are seen in the bay will put you into them. The best include Pink Shrimp and Grey or Green-Ghost. Attach the fly to a size 4 spinner. As for squirts, try blue or green glow combinations 42 inches behind a Madi or onion flasher. If bites are few, speed up before trying shorter leaders.

Do note that chinook fishing is usually so consistent that other species are taken as by-catch.

High season for on-land fishers is the third week in September. It pays to stay at the campground on the beach, as it is a short amble to the pool below the bridge early in the morning, which is the best time to fish, along with tides changes – particularly high tides. Take along a mixed bag of lures: the standby Buzz Bomb, Stingsilda and other weighted lures for saltwater. And because the fish are changing to breathe freshwater, take a healthy collection of Blue Foxes, say, red, pink, chartreuse, along with the same colours in Luhr Jensen Bolos, as well as the pale, reflective Mepps Aglia, which can sometimes be a killer. Note that the time to fish the San Juan River is a few weeks later when the first monsoon hits the coast. In these murky waters, bring the biggest, ugliest spoons lurking at the bottom of your box, as what gets seen is the biggest, and make it gold.

Note that each of the rivers have tributaries that have steelhead, the legendary fish of BC, and close by. So, bring your fly rod.

Port Renfrew has several fisheries of note. It qualifies as a remote fishery even though it is only a one-and-a-half-hour drive west from Victoria.