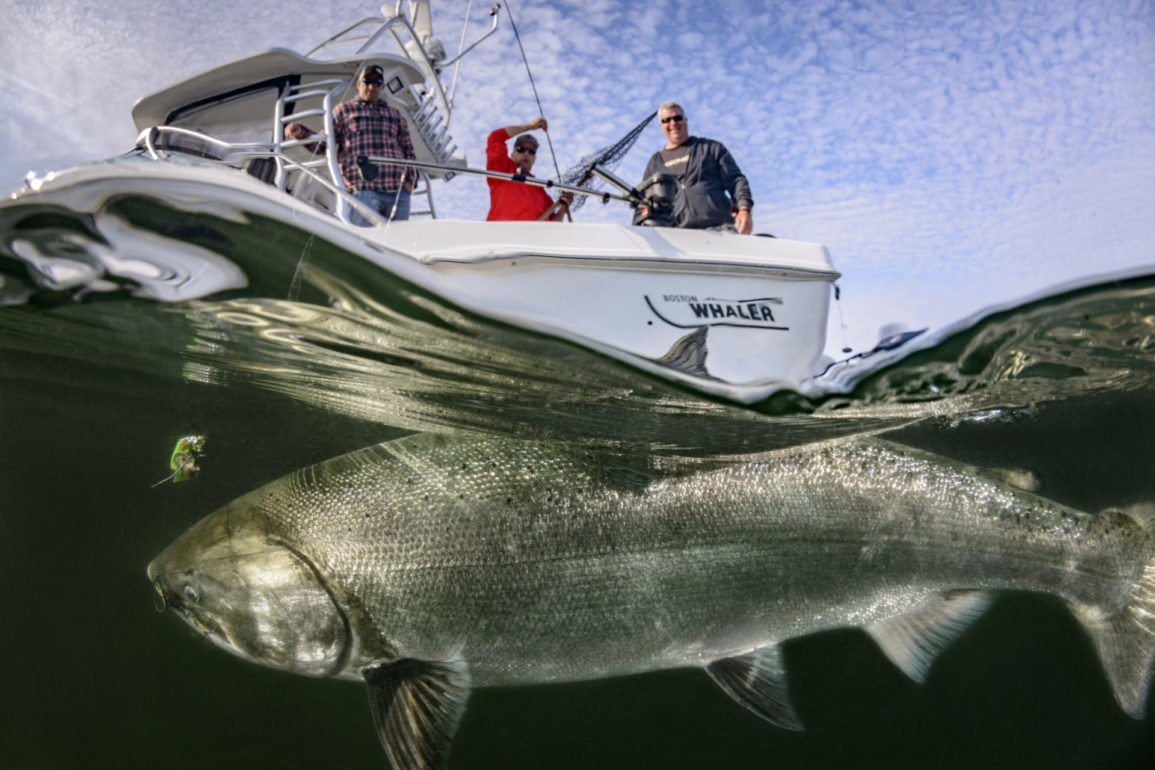 If ‘big’ is a word you associate with fishing, you will love fishing Nootka Sound. That’s because there are big fish, big opportunities and big water.

Nootka Sound is far and away the largest remote fishing destination on Vancouver Island. It is 40 miles across, with Nootka Island in its mouth, and almost 35 miles long. There are nine inlets, many of which are 30 miles long, featuring Muchalet, below Gold River; Tahsis, leading to the town of the same name; Esperanza, leading to Zeballos; and Moutcha Bay, next to the Conuma River and its hatchery that raises chinook, coho and chum.

Nootka Sound has inside fishing, outside fishing and offshore fishing, along with fly opportunities in all three. And the Conuma can bring from 20,000 to that river, to as high as 160,000 chinook to the five rivers that it outplants into. Big is a small word for that kind of return. I would add that, in my opinion, Nootka Sound is the major as-yet-undiscovered remote fly fishery on the whole 500-kilometre Vancouver Island.

The first time I came over the crest of the hill on Head Bay Road from Gold River to Moutcha Bay, I turned to my companion and said, “There sure is a lot of wind down there for an inside fishery.” His response was, “That isn’t wind, those are the splats chinook leave after they jump.” Sure enough, what I thought were waves weren’t going anywhere and they were all over the bay. So, I sped up.

Launched in our inflatables from a local resort, we joined the adrenaline-filled world of thousands of 30-pound chinook charging around the bay. Soon we were lifting our legs out of the water, as these projectiles were jagging here and there just under the surface, and our legs were bound to get smacked.

The issue to getting towed all over the bay was solved by predicting the direction schools would take and getting a fly out far enough in front to have it sink to eye level, and the stop – chinook don’t bite and streak off, chinook simply stop the fly, and your rod tip in the water better be hoisted to the sky in a split second. We were towed around all afternoon, while trollers on the far wall were doing the deed with hootchies. And note that you can follow the fish into the Conuma and fish them there. Note the regulations, though, for all of Nootka.

Much of Nootka Sound is inside waters. Look at the map, and the two-hour run that Muchalet and Tahsis inlets take you. It is all inside and in the winter most fish are taken in these waters. The southern opening to the Sound includes Bligh Island – yes, the one from Mutiny on the Bounty – and all the water to Friendly Cove on Nootka Island. Also fish Camel, Hoiss and Boston points, as well as Perpendicular Bluff.

On the north end, the cut from Tahsis Inlet to Steamer Point is also all inside water, including most of Esperanza Inlet, which includes Zeballos, Espinosa and Port Eliza inlets, out to Rose Island on Gillam Channel that leads past numerous, fishy rock piles on the outside, to the offshore banks.

Expect to fish classic west coast style on the outside. This is surf line rockpile stuff with the captain the most important person on board, with his boat-handling skills for tight spaces, changes of directions and keeping those cutplug lines rising to 30 degrees and dropping to 60 degrees. On the southern entrance, Escalante, Yuquot, Maquinna and Bajo points all give up lots of chinook. On the northern Esperanza/Gillam entrance, there are a dozen rockpiles to the left of Rose Island, with Ferrer Point (pronounced: Fair-ee-er) being the king of king action. Boats line up in a circle to ‘rub’ the rock, and when one boat has a fish on, the other boats create a hole for it to get outside and take the fish beside the boat. Once the fish is in the hold, this boat takes its place again in the circle. There can be times when most boats have a fish on, particularly in September for Conuma fish.

I dropped a standard Coronation bucktail over the stern one day, and everyone on board went, “Whoa,” like Neo in Matrix, when a 25-pound king materialized out of nowhere to smack the fly to smithereens.

In the lee of Catala Island, look for kelp beds where black bass hangout. These schools are precise in their location, so once you find them, just keep coming back – even the next year. I once caught 15 in 15 casts – it was a real hoot – and then released them for the next person.

All along the outside, the apron that runs south to north some 40 miles is where halibut are angled to 150 feet until mid-June. Note that Bajo Reef, accessed from the southern entrance, is major or silly coho fishing. You can whack a corn cob pipe on the surface and watch the coho streak in for a puff. Using more conventional bucktails, I gave up trying to cast in order of four guys on the deck. Instead, I lowered my skunk pattern (black and white) just below the boat, and by the end of the day held forth that my no-strategy strategy caught me just as many fish as the other guys fighting for airspace, and, that my fish were, ahem, bigger. Remember, Nootka is about big.

One final thing: for trolling, remember to put that gold insert into a Purple Haze hootchy as it makes a big difference to your catch. One more thing: chinook from the Conuma, Robertson Creek and Nitinat all mosey by tight to the shore, in the Ferrer case 36 feet of water, so set downriggers at 20 to 25 feet.

Off Esperanza/Gillam channel, 12 miles on a 270-degree compass bearing, puts you on a major bank that is where the pass-by chinook reside – BC, Washington, Oregon and California – and trolling deep puts you on them. Hit a waypoint on your first chinook. If coho streak in to smack a downrigger release clip, it is time to whack the surface with six-inch streamers.

Note that you should be confident in your boating skills, and have as standard equipment a radio, GPS, depth sounder, along with back-up waterproof radio/compass before moving offshore. Daily, the average standing waves coming into Gillam are six to eight feet and it takes confidence and skills to motor out safely. Adding radar for foggy summer mornings makes a lot of sense. And going out in the company of other boats makes for greater safety for all.

Use your stout rods and levelwind reels to drop an anchovy to the bottom, with a 2.2-pound ball on a spreader bar, and bounce it until a halibut vacuums up the herring.

Inner and Outer Bajo Reefs are off the southern entrance to Nootka Sound, five miles. Fish on the downstream side of kelp, or subsurface terrain.

Chum will take freshwater leeches in saltwater, pink/purple egg-sucking leeches, chartreuse or orange over black. White is visible early in the morning and in rain.

Getting To Nootka Sound

If your lodge offers a flight package, it will be cheaper than you can do; however, this requires a night stay in Vancouver at the Airport Delta, or Best Western, in Richmond. Ask for a lodge rate. If you come by car, Tswwassen and BC Ferry (make an Internet reservation on your cell, $17) to Nanaimo, then north to Campbell River on Highway 19, then Highway 28 to Gold River, then the bumpy, dusty 46-kilometre gravel road to Moutcha Bay and onward to Tahsis.

Ask your lodge or Google Fisheries and Oceans Canada. This page was current at the time of writing: https://www-ops2.pac.dfo-mpo.gc.ca/fns-sap/index-eng.cfm. DFO makes in-season changes to day and possession limits. In the past, it has usually been four salmon per day, two of which can be kings; possession limit of eight. However, with the new rules to put Fraser chinook in killer whale tummies, ask your lodge what their best guess is for 2020. Chum arrive in October. Also look for Nootka limits/closures/non-retention zones (typically July 15 to Oct. 15.) For charts, see areas 25 and 125. See hydrographic charts 3675 and 3676.