Attractor streamer fishing can induce an aggressive response from trout. To be effective, cover as much water as quickly as possible. Attractor streamers should be in colours easily spotted by trout and suited to the conditions. It is necessary to consider weather and water conditions when choosing streamers to fish. The adage of using bright or light-coloured flies on bright, sunny days, and dark-coloured flies on dark, overcast days, holds true. Bright, flashy flies with silver are highly reflective and effective on sunny days, but almost invisible on overcast days. On sunny days, in clear free-stone rivers, blue and white streamers really stand out and have proven to be very effective.

Water clarity also plays a key role in the ability of fish to see flies and that is determined by the amount and type of sediment in the water. The greenish to milky-coloured water from glacial silt amplifies colours like chartreuse. In water stained brown from mud and sand, black-coloured flies are most visible and effective. In clear free-stone rivers, trout have more time to see flies, so shades of olive and brown are important as they resemble the natural colour patterning of forage baitfish.

There are countless streamer patterns and most of them are effective at catching trout. Streamer flies like the Woolly Bugger, Slumpbuster, Muddler Minnow, Zonker, Clouser Minnow, Sex Dungeon and many others are all effective. When presented properly and used under the right conditions, the fly pattern choice is less important, so instead consider the colour, size and sinking rate of the streamer.

Matching The Hatch For Migratory Minnows

Many rivers with salmon produce large populations of fry that hatch in the spring and migrate to the ocean. In March and April, anglers, especially in southwestern BC, imitate salmon fry when predators, like rainbow trout, coastal cutthroat trout, mountain whitefish and northern pikeminnows, line up to feast on these schools of unsuspecting fry migrating downstream.

When fishing attractor and migratory minnow streamers, most anglers prefer a six-weight, nine-foot fly rod for rainbow and cutthroat trout. Pair this rod with a large arbor, disk drag reel to pick up line fast and apply adequate pressure to running fish. The best fly line option is probably a sink-tip fly line with a 10 to 15-foot type III sink tip. Alternatively, a multi-tip line system with interchangeable tips is a good option, as the angler can control the sinking rate of the fly by switching between different sinking tips.

A simple leader consisting of three to four feet of level tippet is best. If the leader is longer than four feet, the fly will not sink as fast, and tends to stay higher up in the water column. A short leader also does not put off aggressive fish due to the sight of the fly line. Use an eight to 10-pound break strength leader and only go with a heavier leader if needed. Thicker leaders tend to slow down the sinking of streamers and is counterproductive when the angler is trying to get the fly to sink fast.

Fishing runs: To fish runs, cast across the current and perform an upstream mend immediately by lifting the rod and flicking the fly line upstream. At this point, the angler can either let the fly swing until it is directly downstream and then strip the fly in, or they can start stripping the fly in as soon as the initial mend was made. When using either approach, be methodical in how the run is fished. The run can be divided into a grid by making initially short casts across the river and gradually making them longer to cover as much water as possible. While doing this, slowly move downstream to fish the whole run.

Fishing pools: A good place to fish streamers is a pool just below a riffle in a sharp river bend. Make the first cast across the bottom end of the riffle and let the water push the fly into the head of the pool, and then strip the fly in. This approach presents the fly broad side to trout that may be sitting in the head of the pool.  Trout sitting further downstream, below the horizontal seam created by the fast-moving riffle water spilling over the slower water of the pool, can also see the fly. After a few more casts, let the fly swing further down into the pool and strip it back upstream. If done properly, the angler will gradually enter the water, moving towards the centre of the riffle, presenting the fly further downstream into the pool. Once a fish is hooked, move back to shore and then downstream to play the fish in the slower moving water of the pool.

Targeting specific areas: Another approach is to target specific areas in a river that hold trout. These areas are around large boulders, large woody debris, sudden depth changes and seams between fast and slow-moving water. Cast towards them, or cast slightly upstream from the target, and retrieve the fly across the direction of flow as this presents the fly broad side to the trout.

If there is trouble getting the streamer down to where the fish are, add split shot to the leader, about six inches above the fly. However, most anglers prefer to include as much weight as possible in the fly or opt for heavier and longer sink-tip fly lines.

If a sinking tip fly line sinks too fast, use a floating line and extend the leader to seven feet. In this situation, the longer leader will help the fly sink and the floating fly line will pull the fly towards the surface when using a short leader. In most situations, anglers do not use floating fly lines in rivers, except for slower-moving backwaters where there is little flow.

Matching The Hatch For Resident Minnows

Rivers, especially those in the BC interior, have large populations of the smaller fish species of dace, sculpins and red sided shiners. Most anglers refer to these as forage or baitfish. These fish occupy a variety of habitat and some, like dace and red sided shiners, can form schools in backwaters and eddies, but many will hug the bottom in riffles and runs. It is surprising to see the number of smaller sculpins and dace in riffles. To imitate these baitfish, many anglers have resorted to a Euro nymphing approach that has proven to be very effective, as it presents the baitfish imitation slower, deeper and closer to the river bottom.

The equipment setup for this approach is different than the typical streamer fishing setup, as it uses a nymphing rod instead of the typical streamer rod. For larger rivers, a four or five-weight nymphing rod that is 10 feet in length is best, and use a three weight for medium or smaller rivers. The leader for this approach is similar to a Euro nymphing leader, with a butt section consisting of six feet of 12-pound nylon, such as Maxima Chameleon, followed by two feet of 1X bi-colour indicator tippet tied to a tippet ring. From the tippet ring, use four to six feet of 4X fluorocarbon to the fly. 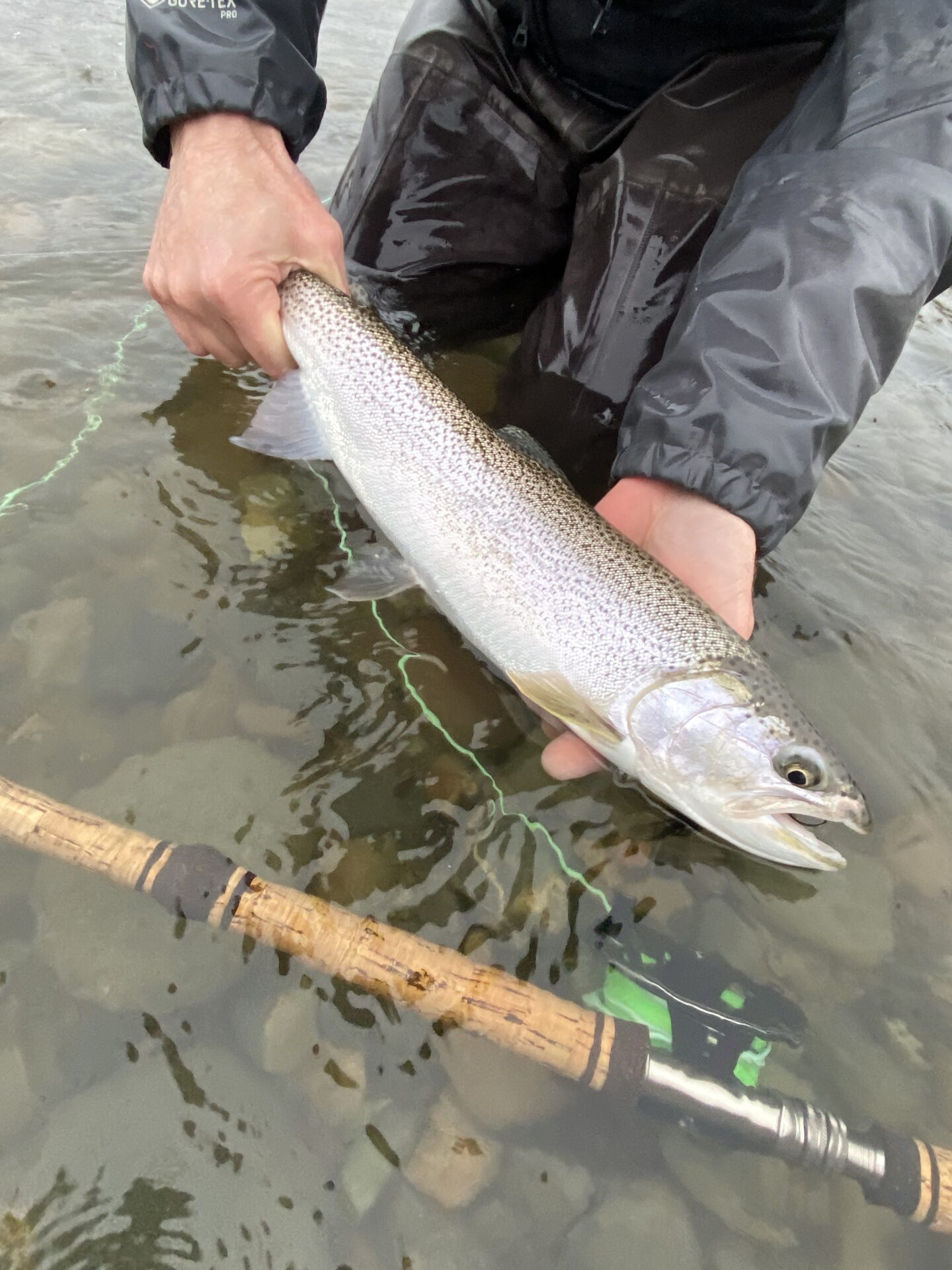 Streamers used for a Euro nymphing streamer approach are heavily weighted and are mostly tied on jig hooks. The flies are presented in the same fashion as when Euro nymphing by moving into position as close as possible and lob the fly upstream, maintaining a tight leader to the fly as it drifts downstream. When there is a hesitation in the leader or unnatural movement, lift the rod tip, as it might be a bite.

Most fly fishing focuses on nymphing and dry fly fishing with little attention to streamer fishing. Most anglers who fish streamers only do it to imitate migratory salmon fry or when fishing attractors. However, taking the time to imitate resident minnows by either a typical streamer approach or a Euro nymphing approach can lead to pleasant surprises.