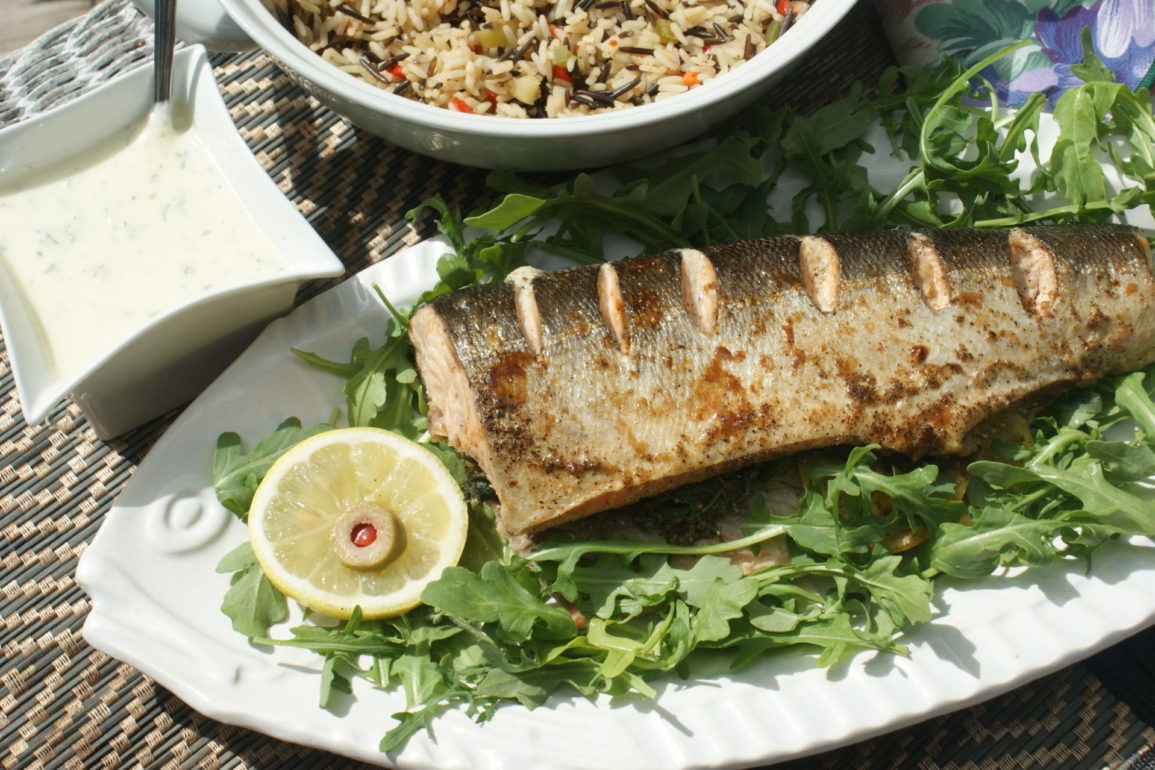 A Dish Fit For Company

Here’s a foolproof recipe for a memorable company meal that’s perfect for any trophy fish – salmon, steelhead or char. One of the reasons I love this recipe, aside from the fact the fish turns out deliciously succulent every time, is the prep work can be done before the doorbell rings. And another reason is because the impressive prize on the platter earns as much praise for the cook as it does for the fisherman.

Wrapping the fish in foil seals in natural juices, all while ensuring the heat is evenly distributed so the flesh is always moist and flaky, never dry.

If you’re using a frozen fish, thaw completely before preparing. Rinse under cold, running water and pat dry with paper towels. Snip off the fins and trim away excess belly fat with a pair of kitchen scissors. Cut off the head and tail. Save these trims for stock-making.

Here’s a thrifty secret for getting more mileage out of your prize catch: if the fish is too large for one feast, slice off a couple steaks or remove the tail and cut into fillets and freeze for future use.

You have two options for preparing the fish – one is to cook it with the bones in (the best choice for working with a frozen fish, as it will be a little harder to debone) or you can debone it. Both methods work equally well, but a boned fish really is nicer to serve, especially for company fare or when smaller children are at the table.

Practice makes perfect, so give it a shot! Working from the inside, run a fillet knife down each side of the backbone all the way to the tail, freeing the rib bones from the spine and allowing the fish to lay flat open.

Slip the knife blade (make sure it is a thin-bladed fillet knife) directly under the rib bones and cut the bones away from the flesh.

Now, beginning at the top end of the fish, slip the knife under the backbone and gently cut it away from the flesh, lifting and pulling as you work it free the full length of the fish.

Don’t panic if you think you are wasting too much of your fish, because these bones can be added to the trim pile for simmering into a rich stock, which makes a delicious base for fish soups, sauces and chowders.

Using a pair of tweezers, pluck any remaining bones from the flesh.

As a general rule of thumb, a four to six-pound salmon serves six to eight people. If preparing a bigger prize for a larger affair, you can increase the ingredients and the baking time accordingly. Likewise, measurements can be reduced for a smaller fish.

I like to serve the fish with a side dish of wild rice and easy lemon-butter sauce for drizzling over top.

Grease a sheet of aluminum foil (which is long and wide enough to completely enclose the fish while leaving a nice, wide seam) generously with butter. Lay the prepared, boned fish open wide on the foil. Sprinkle with spices and cover one side with herbs and lemons. Fold the fish back into its natural form to enclose the filling. If the fish is not deboned, then season the cavity and stuff it with herbs and lemons. Spread soft butter across the top of the fish. Using your fillet knife, cut slits through the skin on the top side of the fish. I use these slits as a portion guide for slicing the fish upon serving, so space them accordingly. Grease a second sheet of foil and place over top of the fish. Fold the edges of the two sheets of foil together to make a secure seam.

Bake in preheated, 425-degree Fahrenheit oven for 40 to 60 minutes or until the fish flakes when probed with a fork. Remove foil during last 10 minutes of cooking, turn on the broiler and baste the fish frequently with drippings until the skin is golden. Remove from the foil packet, transfer to a platter and serve.

Melt half a cup of butter in a skillet. Simmer for three minutes or until the butter turns golden brown and gives off a nutty aroma. Add juice of a lemon, season with salt and pinch of dill.