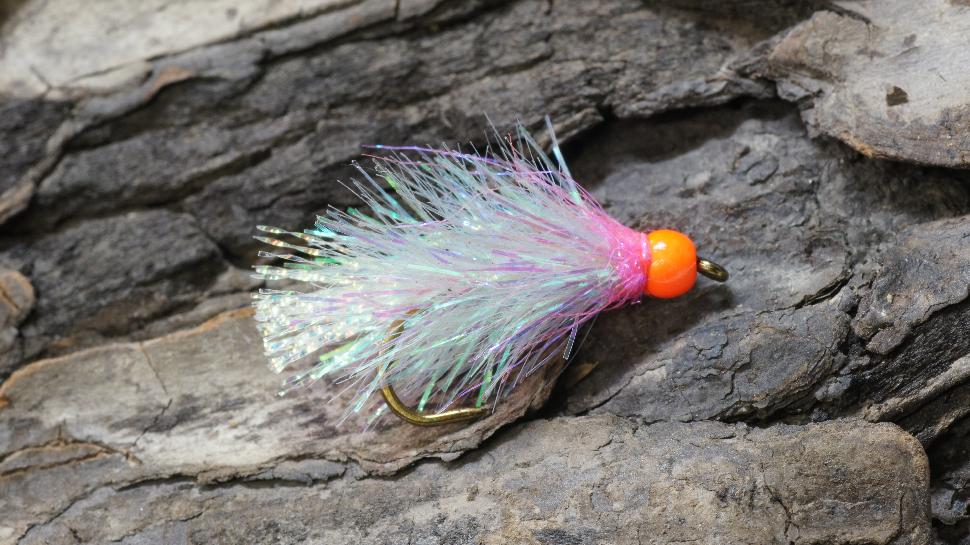 As summer transitions into fall, many anglers turn their attention to local rivers and the pursuit of Pacific salmon as they make their final spawning migration. Although fly fishers target all five species, for many, coho salmon are preferred.

Todd Oishi is arguably Canada’s most accomplished and decorated competition fly fisher. As the competition season winds down Todd enjoys exploring the backwaters and sloughs of the eastern Fraser Valley in pursuit of both coho and cutthroat trout. Todd’s TNT is one of his favorite patterns. It is a simple dressing that, as Todd says, “Works like dy-no-mite!” for those of you old enough to remember the popular 70’s T.V. show, Good Times and actor Jimmy Walker.

The TNT is tied on size 8, 3xl, streamer/nymph hooks. Todd favours soft wire hooks as these straighten rather than break when they accidentally hook an underwater snag. Coho and cutthroat love to hang out near and amongst sunken logs and weed beds. Stiff, brittle, hooks don’t fare as well and often break when you try to pull them out. A characteristic that empties a fly box in rather short order. Using a pair of forceps, softer hooks can be easily bent back into position without any loss of integrity should they deform after being forcibly removed from a sunken log or rock.

Beads are a standard TNT component. One of Todd’s bead choice considerations is based upon how the weight affects fly placement within the water. Todd’s goal is to select a fluorescent orange bead, brass or tungsten that keeps the fly at or slightly above the level of the fish. For water moving at or faster than walking speed, Todd favors tungsten. For slower paced “frog water,” which coho often prefer, Todd prefers gold brass beads. If fish are cruising near the surface or when facing bright clear conditions and spooky fish Todd leans towards gold brass beads. As the fly rides higher in the water, due to the slower sink rate, and the bead colour is less likely to spook fish a gold brass bead is the better choice. Todd’s walking speed guideline is an excellent gauge to consider for other patterns and presentation choices as well.

Todd is adamant about the body material for his TNT bodies, size small, pearl grey, Palmer Chenille. Using larger sized Palmer Chenille ruins the body profile and subsequently, the fly doesn’t perform nearly as well. On sunny or light overcast days the Palmer Chenille flickers and flashes like a spoon, a feature which coho and cutthroat love.

After tying in a length of Palmer chenille, prior to winding forward, Todd attaches a bulldog clip or a pair of hackle pliers to the opposite end and twists it tight so the individual fibers radiate out from the material’s thread core. Twisting the Palmer Chenille creates a sparse slender body with lots of life. Traditional flashy body materials, such as Crystal Chenille, are too bulky and negatively affect the fly’s performance.

A dubbed collar of UV Pink Ice Dub completes the fly. The collar aids the overall profile of the fly by shielding and flaring the Palmer Chenille fibers away from the bead while adding an extra element of attraction. Once the pattern is finished Todd rolls it between his thumb and finger, so the chenille lays a little tighter to the shank of the hook. A trick that also works well for similar flies such as Boobys, Blobs and FABs.

Be sure to have a good selection of Todd’s TNT in your fly box for your next coho or cutthroat outing. If there are any TNT’s left over at the end of the season don’t despair. Todd’s TNT is also an excellent river and lake pattern and one of his favourite competition patterns.

How to Tie the TNT by Todd Oishi