At first glance, chironomid pupae appear simple to imitate. If you follow some basic principles, match the size of the naturals, maintain a slender profile, use the appropriate body, thorax, and gill colours, incorporate body segmentation, you should catch fish. In recent years, several tyers are taking chironomid pupa design to a whole new level. Their attention to detail with overall fly proportions, using double rib combinations to highlight body segmentation and blending body colours to match the natural pupa is nothing short of incredible. Trevor Tatarzcuk is one of those tyers. His Swindler chironomid pupa is an example of his keen eye and attention to detail. 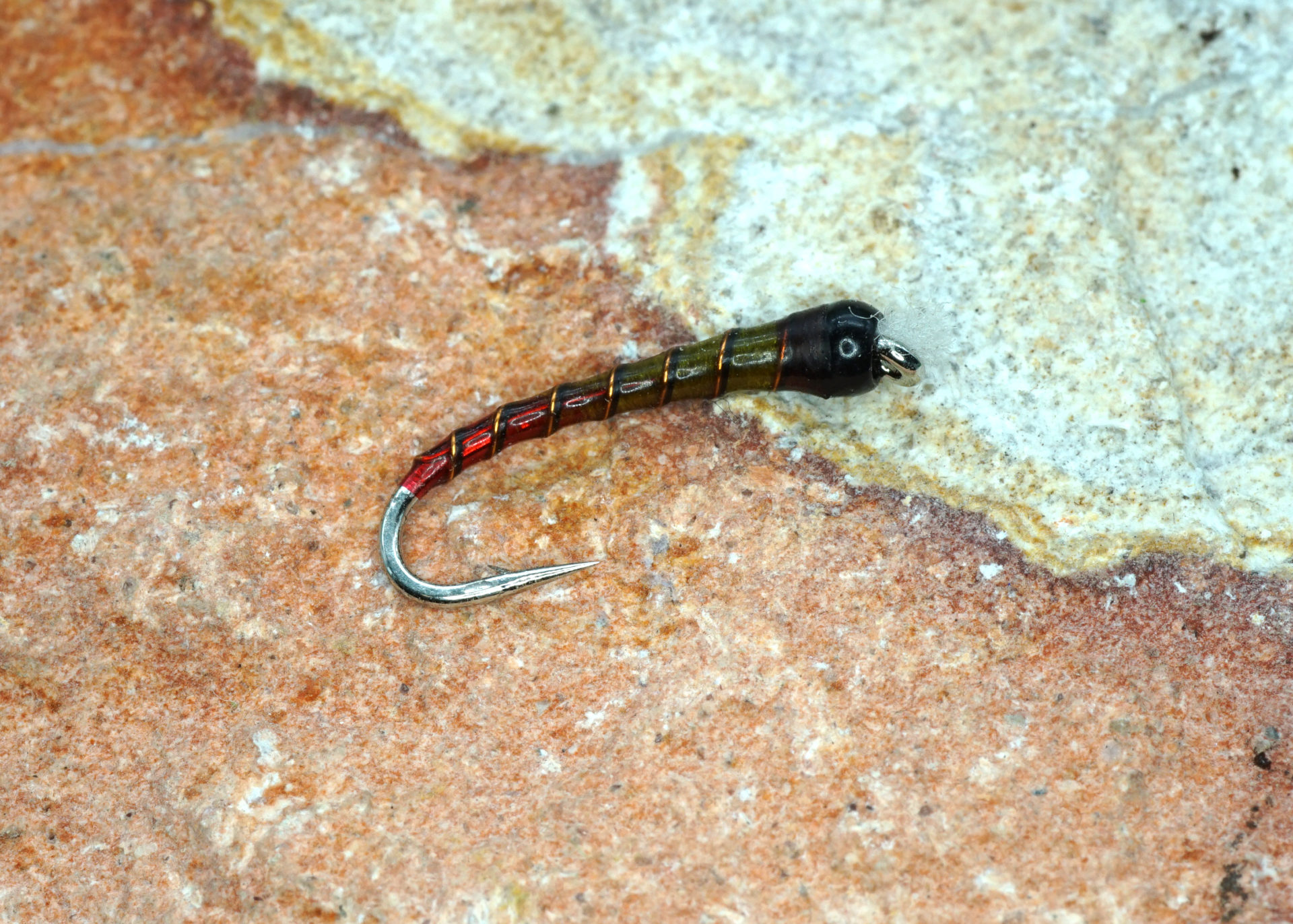 Trevor’s blended bodies are one of his signature trademarks. Many chironomid pupae are not one solid colour, but a blend of two or more colours. UTC 70 tying thread is a crucial component common to all of Trevor’s blended body patterns. Spinning UTC 70 counterclockwise removes thread twist, allowing the creation of flat, almost transparent, wraps. Flat, transparent wraps create a natural colour bleed when wrapping lighter-coloured thread over darker-coloured thread, such as red. To maintain an overall thin profile, Trevor is always conscious of thread placement. There are no random wraps. Every thread wrap Trevor makes has a purpose.

Counter-winding the tying thread to remove any twist and flatten the wraps is critical to proper body construction. This process ensures the flat, touching turns necessary to maintain the slim overall body profile required for success. When Trevor is within three to four inches of a transition point between the darker underbody and the lighter body, he exposes roughly four inches of thread and counter spins the bobbin, if necessary, to flatten the wraps, while pulling down and gently rocking the bobbin. This trick further flattens and opens the wraps, aiding the translucent transition between thread colours. Trevor repeats this process for the first three to four wraps back up the shank as he begins to form the body taper.

Although Trevor fishes barbless, he doesn’t de-barb his flies until his pupa pattern is complete. Trevor uses the barb as a reference point when building the body, making it easy to tie multiple flies accurately. When forming the underbody and securing the wire ribbing down the shank, he places two thread wraps behind the wire near the hook bend and uses just one flat, 45-degree wrap back up to in front of the wire before continuing back up to the bead. The lighter body colour finishes at the hook point. This practice not only makes the creation of the small red butt, common to many chironomid pupae, but also helps to achieve a seamless transition to the hook bend.

Trevor follows a disciplined process when creating the body taper, which is essential to match the natural pupa. Chironomid pupa bodies must be slender and tapered. After winding the body thread down to the hook point, using flat, touching turns, return to the rear of the bead. Take the thread back halfway between the hook point and return to the bead. Continue to build a small taper in the remaining space between the bead and midpoint. Once satisfied with the overall body taper, lock the body thread off using a half hitch or minimal turn whip finish; don’t remove the tying thread.

During his observations, Trevor noticed the shadow line and raised edge of each body segment. Trevor uses double ribs to highlight these features. The Swindler utilizes contrasting wire colours in two different sizes, such as small amber wire and extra small black wire. When using contrasting colours and wire sizes, wind the smaller-diameter wire in front of the larger-diameter wire to create both segmentation shadow and depth. You can also use wire and mylar or Flashabou rib combinations to provide additional segmentation highlights.

There is an art to winding both ribs forwards. Trevor winds his wire up the shank individually, using seven open, even turns to create eight body segments. When using different wire diameters, wrap the thicker-diameter wire first. Follow up with the thinner diameter wire by trying to rub it against the thicker wire to keep them tight and together. A rotary vise comes in handy when winding the ribs, as it helps provide accurate placement and equal segment spacing on all sides of the fly. To minimize thread bulk, Trevor only uses two flat turns to secure each wire. Once tied off, he then places a half hitch, or minimal wrap whip finish, in front of the wire to lock it off. Once locked off, twist and break off the excess wire. Breaking off the wire creates a neat, smooth tie off while prolonging scissor life. The thin, tapered thread thorax common to all of Trevor’s patterns provides additional security, along with the UV resin or brushable superglue used to finish the fly.

How To Tie the Swindler