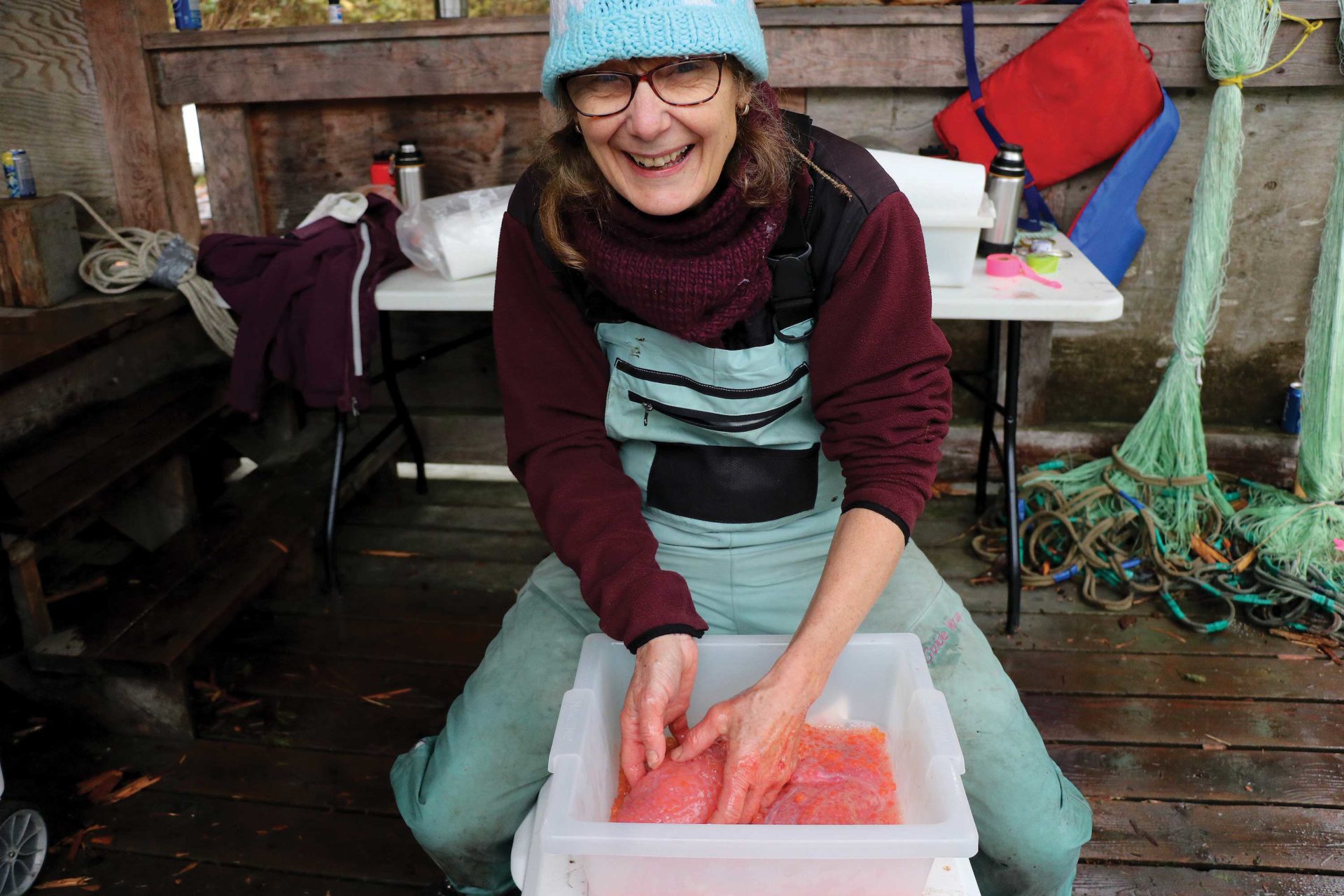 The Percy Walkus Hatchery leads the way in salmon conservation

The allure of being able to reel in a salmon over 40 pounds is what draws many fishing enthusiasts to the BC coast each and every year. And if you have ever been able to experience the heart-pounding joy that comes with landing one of these tyee, you likely have the Percy Walkus Hatchery, its staff and volunteers, to thank for that.

There are only two river systems in the world that are considered statistically significant for the production of salmon over 40 pounds – the Wannock and Kitsumkalum rivers. What this means is that if you’ve ever caught a salmon over 40 pounds, anywhere along the west coast between Alaska and California, there’s a 90 per cent chance that salmon came from one of those two rivers.

The Percy Walkus Hatchery is situated in the First Nations village of Oweekeno, along the Wannock River. Each year, volunteers make their way to this hard-to-reach community with a single goal in mind: to work together to preserve this genetically unique type of salmon.

Sid Keay is the owner of Duncanby Lodge, near Rivers Inlet, and a long-time volunteer with the Percy Walkus Hatchery.

“The Percy Walkus Hatchery is the model for what should be done on the coast,” said Keay. “It shows what can happen when you work together, when you have common goals and common interests.”

Anglers, First Nations communities and lodge owners, along with some help and support from the Department of Fisheries and Oceans (DFO), have been able to put in the time and effort to preserve these large salmon.

“Salmon from these two river systems are genetically unique,” said Keay. “Once they’re gone, they’re gone. This hatchery program is why we still have big salmon on the coast.”

The Percy Walkus Hatchery was built about five years ago, with the help and support of Duncanby Lodge, the Rick Hansen Foundation, Pacific Salmon Foundation, The Northern Fund, LGL, Good Hope Cannery, DFO, the Oweekeno First Nation and a long list of like-minded friends.

Prior to the Percy Walkus Hatchery being built, volunteers had been flying eggs and sperm from these unique salmon to the Snootli Hatchery in Bella Coola, and then flying the fry back to these river systems in the spring, but the survival rate wasn’t as high and the costs weren’t sustainable.

“[Today,] we have a 92 to 98 per cent survival rate from eggs to fry,” said Keay. “We raise the fry right here in their own water system.”

While the natural process is always preferred, “there are a lot of factors that contribute to egg loss,” said Keay, citing other fish, birds, bears and weather as just some of those factors.

“A hatchery guarantees the survival from eggs to fry,” he said.

The Percy Walkus Hatchery website, www.percywalkushatchery.org, explains the eggtake process: Each year, salmon return to their natal streams to spawn. Pacific salmon are semelparous, meaning that they spawn only once in their lifetime. After spawning, the salmon die and their bodies are returned to the earth as food for other organisms or as nutrients for aquatic and terrestrial plants. Most chinook salmon return when they are four years old; however, some runs return when they are as old as seven years. Salmon runs containing seven-year-old chinook salmon are quite uncommon. The Wannock River system consistently produces four and five-year-old spawners. Wannock chinook are known for being exceptionally large-bodied and they are a prized sportfish on the BC central coast.

Returning spawner groups are known as brood years. Individuals from the returning brood year are caught in the river with the help of nets, and their eggs and sperm are collected by fisheries technicians. These fish are known as broodstock. Sample data is collected from these broodstock fish. Data includes location of capture, time, date, fish length and scale samples. Over time, this information helps to show trends in capture location and timing.

The hatchery process begins with an eggtake. The reason for collecting salmon eggs and sperm and fertilizing them in a hatchery facility is simply based on survival percentages. In a controlled environment, such as a hatchery, environmental conditions are kept at optimum levels throughout the entire incubation and rearing period. As a result, overall survival rates are much higher when compared to in-river incubation and rearing. This increase in egg to fry survival helps to offset low brood year returns, ultimately speeding run recovery.

Their longer lifespan provides more opportunity to feed and grow, which allows them to reach greater sizes in terms of body mass. The Wannock River consistently produces seven-year-old chinook.

While the importance of the Percy Walkus Hatchery and its work is obvious, being able to get the work done comes with its own challenges.

“It’s easier in bigger areas,” said Keay. “But in isolated communities, it’s much harder.” The hatchery employs four locals full-time, and volunteers fly into the hatchery each year or locals from the surrounding communities offer their help.

“We’ve shown it’s possible,” said Keay. “We had a lot of naysayers in the beginning, but we’re showing what a success story this is.”

Going forward, “our future at the Percy Walkus Hatchery looks bright,” said Keay. “We’re doing incredible science. We want to carry on forever, and we hope others are motivated by what we’ve done.”

Volunteers and funding are the biggest hurdles for any hatchery to overcome, and especially one as remote as the Percy Walkus Hatchery. To that end, the hatchery has been encouraging the involvement of local youth. “Our volunteers are getting older, and we need young people to get motivated to volunteer,” explained Keay.

Today, the Percy Walkus Hatchery is sustaining salmon populations in several areas, including the Wannock and Kitsumkalum rivers, Kilbella and Chuckwalla rivers and Johnston Creek.

“Hatchery programs are absolutely vital for all species of salmon,” states a quote from the Duncanby Lodge website, www.duncanby.com. “Today, one in four chinook salmon is a hatchery salmon. Think about that: one in four chinooks that are caught – be it sport, commercial, First Nations or returning to spawn – is a hatchery fish. Without these programs, the species would not survive.”

To donate, and to donate to the Percy Walkus Hatchery in particular, visit the Pacific Salmon Foundation website at https://www.psf.ca/support/donate. When you donate online, you can choose where your donation goes.