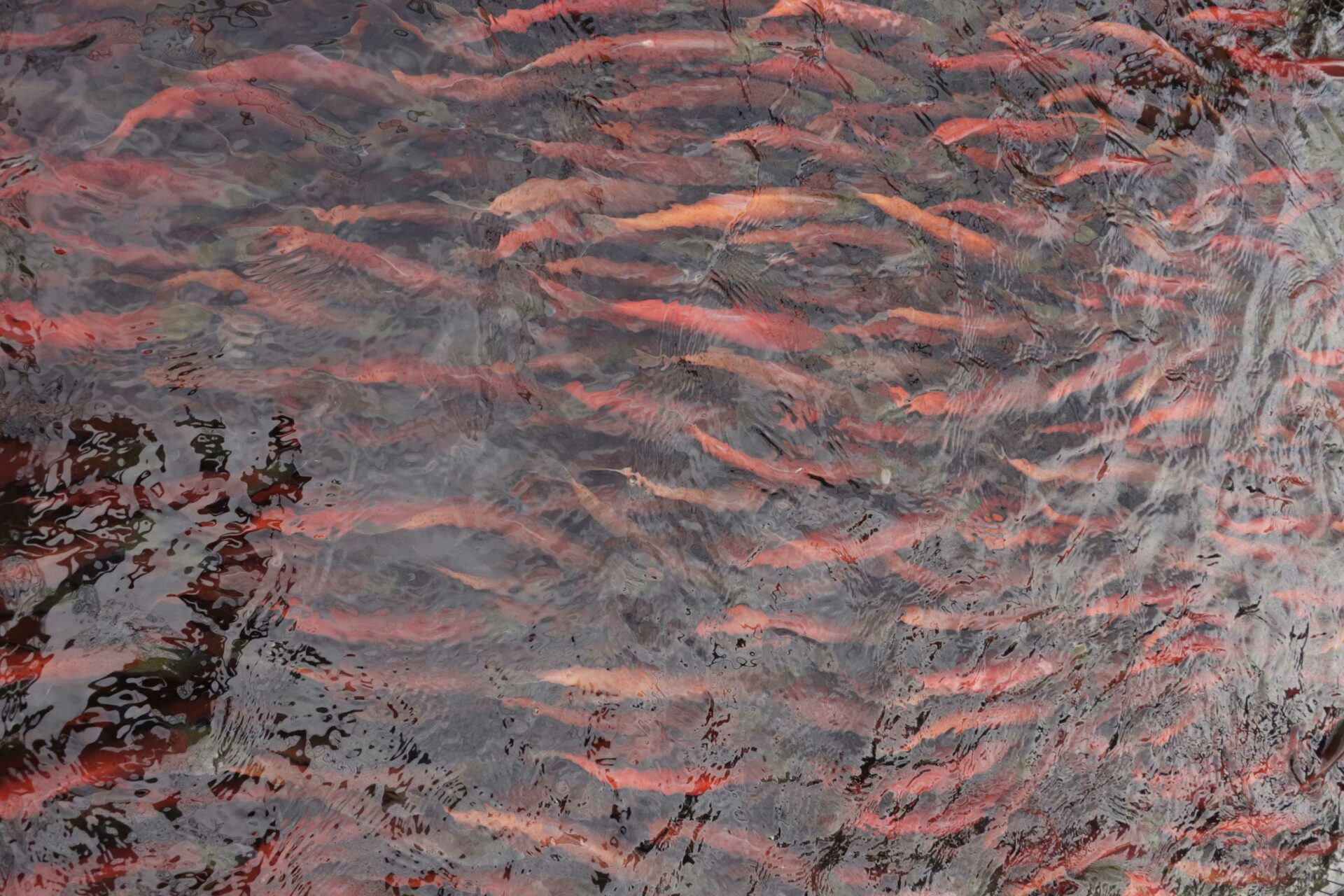 Kokanee Fisheries In BC

Fall hits early in the interior of the province. By Mid-August there is a chill in the air that is unmistakable. Summer vacations are over and folks head back to urban centres. They follow the Fraser back to the Lower Mainland, opposite to the salmon migrating inland. The interior of the province takes a much-deserved rest, as only a few of the fly fishers remain or return to fish their favourite fall lakes. The plentiful kokanee fisheries that drove interior tourism and recreation for the summer are all done. Kokanee now are seen as a number of red fish circling interior lakes searching for a place to spawn. Ten of the top 20 highest used Cariboo lakes focus on kokanee fishing, but that was not always the case. How and where did these fisheries come from and where are we headed?

Kokanee are native to British Columbia. They are a subspecies of sockeye salmon and readily interbreed with them. Unlike other salmon species, sockeye require the use of a lake for a year, enabling them to grow large enough to make the journey to the ocean. Sockeye that “choose” to stay and live in the lake instead of go to the ocean are called residuals. Residuals that spawn and have offspring that stay become kokanee. Many steelhead runs also adopt this life history. Their offspring may stay in the river and become resident rainbow trout or migrate to the ocean and become steelhead.

There are basically three groups of native kokanee in British Columbia, their diversity following the major river drainages. There are coastal, Columbia River and Fraser River-origin kokanee. Coastal kokanee largely are not of interest to the kokanee angler. They are an aggregate of complex coastal sockeye populations that inhabit hundreds of coastal lakes. Most of these lakes have low productivity due to the low nutrients provided by the granite rocks of the Coastal Mountains. Coastal origin kokanee are generally very small, very numerous and only of interest to anglers in that they provide forage for other fish, such as coastal cutthroat trout. They are the herring of the coastal lake.

Columbia and Fraser-origin kokanee, however, do provide natural kokanee fisheries of interest. Columbia-origin kokanee are present in lakes such as Kootenay, Arrow, Skaha, Okanagan, Wood and Kalamalka. Each basin has evolved to have differing strains depending on the populations of sockeye that colonized them. Each individual population may also have differing life histories within them. For instance, Kalamalka and Okanagan have both shoal (within the lake) and stream spawners living to different ages and sizes. Kootenay has even more variation, with different arms of the lake north, south and west having differing populations and even a division of small and large bodied size kokanee in differing streams within the west arm of the lake. The longer that kokanee populations have been isolated from sockeye, the more unique their genetic structure.

Fraser-origin kokanee are less prevalent than Columbia origin. They do, however, provide some significant fisheries on Lac la Hache, Tatla and Puntzi lakes and provide a source of food fish for the large-bodied rainbows in Quesnel and Shushwap lakes.

Kokanee are very popular with sports anglers. Anglers focused on kokanee generally require less complicated knowledge of the fish and lake biology needed to catch them than needed for rainbows, although some would argue that. They are an excellent eating fish and generally inhabit lakes large enough to have facilities and good public access. Due to angler demand, kokanee have been brought into production for stocking through the Freshwater Fisheries Society of BC (FFSBC.)

Development of a kokanee stocking program in BC was much later than for rainbow trout for a number of reasons. The initial development of the BC lake stocking program revolved around rainbow trout, specifically in developing small, productive lakes for rainbow fly fishing opportunities. In the ‘80s, there were countless barren lakes (no native species) and lakes with no sport species that were treated to proliferate rainbow trout mono-culture fisheries. The productive interior lakes provided an environment where rainbow trout grew big and fast with few limitations. Each new lake that received rainbows developed trophy-quality fisheries in only a few years. Innovators of small lakes fly fishing learned the hatches, timing and developed methods to catch large fish at phenomenal rates. It was the golden era of small lakes stocking.

But as with every newly found resource, the indefinite growth phase could not last forever. In a decade or so, all obvious candidates were fully stocked and the initial growth rates benefiting from the barren lake effect (basically untapped resources accumulated in a lake before it had fish) began to slow. There was also a group of lakes that could not easily be treated for coarse fish, and in those lakes coarse fish out competed rainbows for food, leaving many mid/large-sized productive lakes without sports fish.

The first kokanee stockings were of that nature, basically targeted at the lakes where rainbow trout could not adequately compete with existing fish. However, there was a second challenge. Sockeye and kokanee readily carry an extremely transmissible virus called IHN (infectious haematopoietic necrosis.) IHN is found in many wild fish and is carried without serious harm until a point where fish are crowed or stressed: exactly the conditions faced day-to-day in fish reared in hatcheries. There was a strong discouragement in requesting kokanee for stocking because of infectious disease protocols calling for isolation, increased cleansing/disinfecting and specialized equipment in the hatcheries. In serval hatcheries where there were outbreaks, all fish had to be euthanized so as to not risk passing on the disease to other fish.

The popularity of the fish once stocked, however, put increasing pressure on fisheries managers to expand stocking to an increased number and diversity of lakes. Original stockings on Bridge, Deka, Horse, Ruth and Stump yielded thousands of two-pound-plus kokanee for harvest. It was clear kokanee could compete with native coarse fish, providing survival rates and creel returns unparalleled in stocked rainbow fisheries. Kokanee could also be stocked at younger ages (fry) than rainbow trout (yearlings) and still have many-times-higher survivals, greatly increasing the hatchery’s cost/benefit. The key was kokanee ate mainly zooplankton, not the animals that feed on zooplankton, as is the case for rainbows. Kokanee could capture the primary productivity in the lake, leading to high survivals and the capability of producing many more pounds of biomass (more, bigger fish) per hectare than rainbow trout.

As the demand for kokanee expanded, other fish culture techniques used in rainbow trout became applicable. Strains of sterile 3n kokanee were developed to reduce the risk of kokanee establishing feral populations and risking interbreeding with wild fish. Sterile kokanee also had an extended life, often living four to five years plus. All female (AF) strains of kokanee have also been developed to minimize the chance of feral populations and to increase the number of eggs available for hatchery use. Hatchery technology has advanced so viruses such as IHN can now be treated, severely diminishing the risks of disease spread within hatcheries. Kokanee can now be raised off season to rainbow trout production, increasing the efficiency of FFSBC hatcheries substantially.

Kokanee are now showing up in Regional Small Lakes Stocking Plans, where biologists are developing different stocking strategies to address everything from family kokanee fisheries to trophy kokanee fisheries. The types of lakes being stocked are also being widened and diversified. Smaller lakes are now being stocked, as are lakes to develop multi-species fisheries by stocking both rainbows and kokanee together. Biologists coming from a rainbow-centric stocking history now have a new tool to increase the angling quality and quantity in lakes in their regions, never mind the opportunities that will exist to combine stocking of kokanee with large-bodied, kokanee-eating rainbow.

All regions of the province have now taken advantage of the ability to stock kokanee. Kokanee stocking represents the beginning of a new period of diversified fisheries for British Columbians. A simple search of the FFSBC webpage can direct you to the kokanee stocked lakes in your region and which are targeted for family and trophy. Next time you are in the interior, maybe think of grabbing both your trolling rod and your fly rod; we’re not trout only anymore.