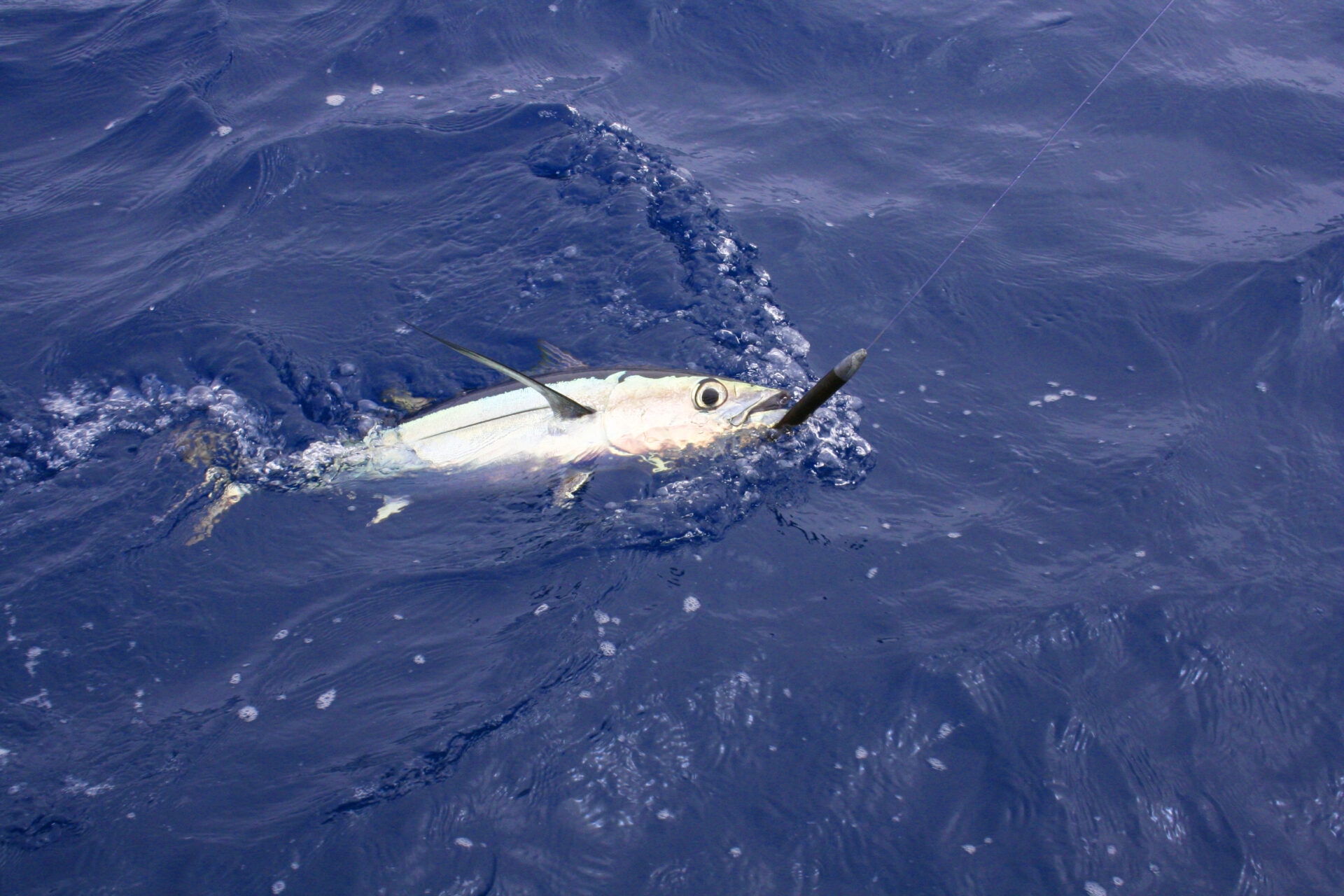 In Search of Albacore

Waking at the first blush of morning, every member of our angling team dressed warmly and headed toward the main lodge at Moutcha Bay Resort. Fishing guides and resort guests collected breakfast sandwiches, boxed lunches and thermoses of hot coffee while enthusiastic marina and fish processing staff kept busy with their morning chores. In the background, staff had been hard at work since 4:30 a.m., shuttling enormous volumes of ice from processing plant to marina, then ferrying the ice down the dark docks and into each of the five guide boats.

The day before, our party arrived at Moutcha Bay Resort via the two-hour Sea-to-Tree route from Campbell River – one of the most scenic drives in Canada. Upon arrival, we were surprised to find an expansive, well-organized ecosystem in the wilderness, complete with full-service marina, rainforest campground, rustic lodge with a restaurant serving locally sourced fare, ocean-inspired spa and cozy waterfront yurts.

For weeks prior to arrival, we had waited and watched for an opportunity to target albacore tuna at this magical destination. Each day, the fishing guides at Nootka Marine Adventures updated their Terrafin satellite imaging, watching the sea surface temperature and chlorophyll chart patterns. Monitoring these patterns enables guides to predict contour lines (which represent changes in elevation or depth), even if cloud cover prevents sharp imagery on the day of departure.

The torpedo-shaped albacore tuna is a highly migratory species, able to travel at continuously high rates of speed. In fact, their annual migration begins far away from Vancouver Island, in the Pacific waters off the coast of Japan; their journey begins in the spring and ends in late summer, in the waters surrounding North America. On Vancouver Island, anglers have a six-week window, starting in the middle of August, to fish for albacore tuna – but you have to be diligent, and you have to be lucky.

Migrating albacore follow oceanic fronts where two water bodies meet. The fronts lure plankton, which in turn attract schooling anchovies, sardines and squid – and these, in turn, attract albacore tuna. Since it can be difficult to discern the exact location of oceanic fronts, anglers use SST software and search for markers to approximate a guess. If the markers are too far to reach by boat, there isn’t much to do except wait for the fast-moving tuna to come closer.

Using the Terrafin satellite imaging system, our fishing guides had searched daily for a green-blue chlorophyll colour break and warmer waters of 13 to 18 degrees Celsius within reach of Moutcha Bay and Nootka Marine Adventures’ other fishing resorts, Nootka Sound and Newton Cove. As soon as they sent us word that conditions were looking promising, we quickly packed and headed for Moutcha Bay.

Early this morning, guides were still closely watching their satellite images, as well as the weather report. Our fleet of guide boats would head far off-shore – up to 25 miles – seeking calm seas and good weather.

The fishing guides summoned bleary-eyed guests to their boats, double- and triple-checking that everyone had their lunch, water, sunglasses and sunscreen. The night before, they had specially converted the guide boats for our tuna fishing excursion. All the downriggers, bonkers, nets and rod holders used for salmon and halibut fishing were removed to make space. In went eight six-and-a-half-foot, medium weight rods in a Christmas tree pattern, with double-action, fast retrieval reels.

We hopped into the boats and, as the first rays of sunlight begin peeking out from the misty mountains framing Nootka Sound, we pulled away from the docks and headed toward the Pacific Ocean, buzzing with excitement.

For all albacore trips, several boats travel together in convoy to maximize safety, with a minimum of three boats per location at any given time. All the boats remain in visual and radio contact and, once offshore, they constantly update each other as they move, change direction or switch fishing spots. Our guides frequently reminded us that there’s zero room for negotiation when it comes to safety: if there’s any sign of bad weather, we’d be turning back.

Sipping coffee and watching the sun break over the mountains, we traveled westward through the tranquil waters of Nootka Sound, drifting past thick rainforests and rocky shorelines. Eventually, we reached the open ocean. By the time we neared our waypoint of 25 miles offshore, it was 8 a.m. and the sun was dazzlingly bright.

The scenery was like nothing I’d ever experienced. On all sides, the Pacific Ocean stretched languorously; far behind us, Vancouver Island was a distant mountainscape. The water was a radiant tropical blue. Seabirds soared overhead while large albatross and shearwaters searched for a meal. It felt like we were in another world.

Mellow swells lifted and dropped the boats while our guides discussed their plans and searched the water for signs of baitfish. Occasionally, scratchy communication emitted through the radio.

Suddenly, someone noticed surface activity off the portside bow – perhaps tuna? Our excitement mounted when we saw a super-pod of Pacific white-sided dolphins chasing our wake. The sheer size of their group was astounding. It became clear to me that we were but mere visitors in their deep-sea domain.

Over the radio, the guides discussed which lures to start with. We were using Zuker’s bullet head surface lures and cedar plugs barbless tuna hooks, and Rapala divers. We had 60-pound test Dacron line and 120-pound leader. We were prepared to receive fish, with an ice-filled fish well and a large cooler containing salted ice slurry. Once we were geared up, we began trolling at a sprightly seven knots using our main engines.

It happened quickly. Suddenly, the water’s surface was teeming with albacore tuna. Several fish leapt straight out of the water at incredible speed, spiraling like a thrown football. Our guide turned us in their direction, trimming the engines to shoot more froth on the surface and create a disturbance. We alerted our companion boats, and they closed in.

Over the radio, we heard that another group 60 metres away had hooked up on a double-header. We turned our boat and aimed straight across their stern.

Albacore have a baitfish mentality. If you can keep their feeding frenzy going, they’ll bite for longer. Coho and spring salmon sometimes behave similarly, but nowhere near the same extreme. The closer the boats move together and get other boats to hook up, the higher the likelihood we’d keep the school active. One or two boats will have a difficult time maintaining the action and staying on top of the school; the more boats you can work with, the better.

We were coming up on the other boats, swiftly trolling at seven knots with thick propeller wash and bouncing lures, knowing the fracas would attract the albacore. All eight lines streamed out behind us. Albacore have large eyes with huge, teaspoon-sized pupils, enabling them to see for hundreds of feet, and we were hoping the fish far below the surface would spot us and swim up to investigate.

One of us got a bite, and we all jumped into action. The first fish smashed the lure and was rapidly followed by two more hookups – a triple-header! Our guide quickly drew the throttle down to three knots and removed the other lines to minimize mayhem; we were all hollering with excitement as we began retrieving the fish. They swim incredibly fast, and I immediately saw how an energetic albacore could easily spool a 200-yard line.

Our guide had advised us to prepare for triple- and quadruple-headers, but none of us really appreciated how intense it would be. While madly reeling in the first two lines, we adjusted the drag on the third reel, just enough to keep the fish running without breaking the line. Our guide directed the boat to stay on top of the action and took over the third rod.

As the fish came closer, we began to notice their vibrant colours: purple, yellow, green and aqua, flashing under the water’s surface. They shimmered in the sunlight and moved like silver bullets. We kept the boat drifting while retrieving the tuna to avoid tangles or thrown hooks. Once they were close enough, our guide yanked them out with a gaff and, in one swift movement, dispatched and bled them with an incision to the gills. Without ever touching the deck, the tuna was immediately placed in the salt-ice slurry to cool.

Tuna are a warm-blooded pelagic fish. During the intense sprint of a hook-up, their bodies warm quickly. Once aboard, it’s imperative to get them into the ice slurry to preserve their meat quality. After cooling the fish for 15 minutes, we stacked them with salted ice in our fish well and repeated.

Nootka Marine Adventures’ trips average around 15 to 20 albacore per boat – on a good day, up to 40. Albacore is a sustainable fishery with suggested daily limits of 20 albacore per license to maintain fish stocks; however, once the fish well was full, it was time to head home.

Interest in albacore tuna fishing along Vancouver Island’s west coast has grown exponentially over the last few years – in fact, it’s become a top to-do on many angling bucket lists. Novice and seasoned fishers alike are welcome to join a professionally guided fishing experience with Nootka Marine Adventures, which offers excursions out of all three resorts. The trips are ideal for multi-day fishing packages, allowing visitors plenty of time to cruise the water while indulging in the full resort experience. Find more information at www.nootkamarineadventures.com.