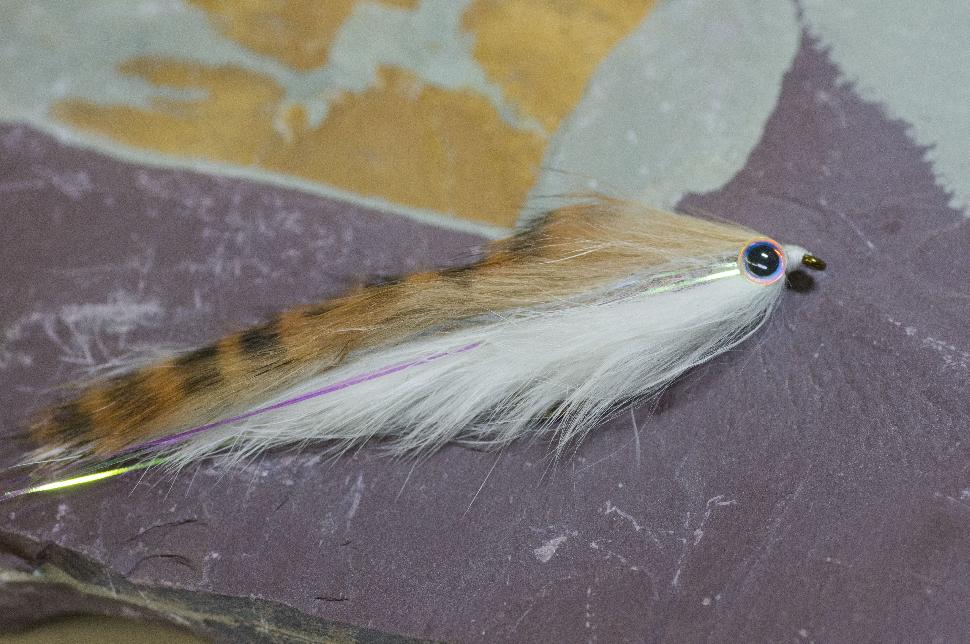 Scott Sanchez’s Double Bunny is a simple, creative amalgamation of two rabbit strips cemented along a hook. Since its initial inception, Scott’s Double Bunny has caught well over 30 species, has spawned countless variations and is a three-time winner of the Jackson Hole One Fly Competition. If you like chasing predatory fish the Double Bunny is a fly box must.

Most Double Bunnies are tied in natural combinations to mimic forage fish. A darker strip is used for the back, light coloured strips for the belly. Solid or non-traditional attractor ,colour schemes, designed to trigger an aggressive response or to have a Double Bunny stand out in certain water conditions, also work.

Once in place on the hook the rabbit strips are glued together and to the dubbed body using fabric adhesive. Fabric adhesive such as Bish’s Original Tear Mender (www.tearmender.com) provides a solid bond and once dry remains flexible, allowing the rabbit strips to breathe and move. Tear Mender can be found in outlets such as Canadian Tire in the camping section on a seasonal basis. The most consistent source for locating Tear Mender in Canada remains online or through individual fly shops that are aware of a Double Bunny’s charms. I have also used other fabric cements found in craft and sewing stores, so far they seem to hold up. Look for fabric adhesives that are waterproof and remain flexible once dry. Be sure to check expiry dates. Tear Mender for example, recommends that the product should be used within 12 months of purchase. Fabric adhesive also makes an excellent choice for gluing eyes onto a variety of natural furs, hair or dubbing, as is the case with the Double Bunny.