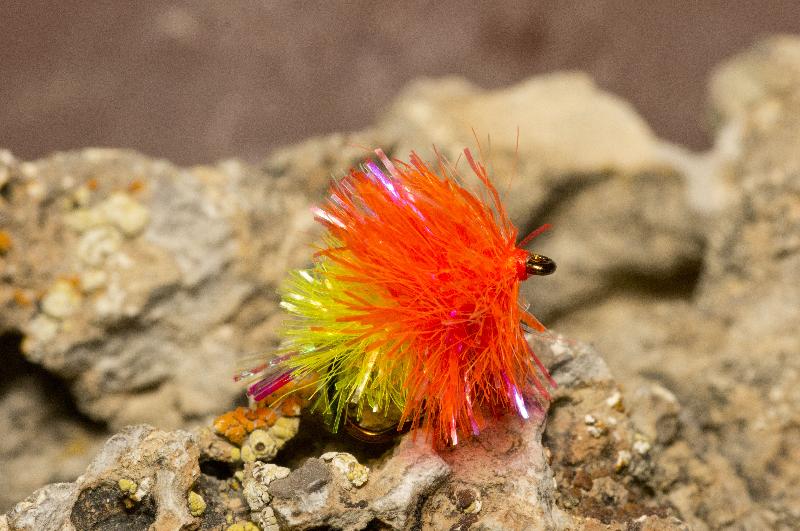 In England, the Blob is as effective as it is controversial. Used primarily as an attractor pattern, an increasing number of English fly fishers believe the Blob’s popularity is reducing anglers’ skills as they are losing touch with imitative patterns and techniques.

So why is the Blob so deadly? Due to a prolific cormorant problem, most English lakes stock fish in excess of two pounds. Smaller, immature trout simply become cormorant fodder. Larger stocked fish still possess body fat from their stock pond days and have not yet learned to feed naturally. As a result, aggressive attractor tactics featuring brisk retrieves and gaudy flies prevail, a method known in some circles as “stocky bashing.” North American stocking practices differ. Many fish are stocked as smaller juveniles. These immature trout must learn to feed and survive, hopefully maturing to catchable sizes. Due to natural feeding practices most of our trout are not as prone to attractor techniques. But when fish seem of the bite due to weather change, moved into deep water or have a natural aggressive disposition, such as Fraser Valley strain rainbows, sprinting a Blob past their noses often results in an aggressive response. Every stillwater fly fisher should reserve a few parking spots for gaudy attractors such as the Blob for just these occasions.

Blobs are simple to tie. Consisting of nothing more than a short tail tightly packed Fritz body tied on a stout wide gape hook. Straight eye scud hooks also work well. Size #8 and #10 are the most common sizes.

Fritz is not a widely known or available product in North America. It can be purchased online through a number of European retailers. Recently I discovered Robinson’s Outdoor Store in Victoria also carries a comprehensive Fritz assortment. Fritz resembles Crystal Chenille but is softer and most varieties don’t feature Crystal Chenille’s pearlescent fibers. 15MM Fritz is the most widely used size and comes in a myriad of colours from soft pastels such as peach and coral to bright fluorescent yellow, pink and hot orange. Many tyers blend different colours in unique combinations. The fluorescent yellow rear and hot orange front of the Tequila Blob is an example of this philosophy. Other materials can also be integrated such as egg yarn and long strand dubbing, even dyed deer hair.

Fritz is easy to work with. Blob bodies must be dense so they push water providing an acoustic footprint to further augment the fly’s appeal. Moistening the Fritz by dipping it in a glass of water makes it easy to manage. Prior to tying in, pull on each end simultaneously to remove any twist. This practice eases winding the Fritz around the hook. Strip the fibers off one end of the Fritz and tie in place. As you wind the body forward push and pack each wrap back tight against the previous wraps. Use your fingers to stroke the individual fibers rearward to avoid accidently tying them down. To reduce bulk, pinch and hold the Fritz in place at the tie off point. Using the thumb and forefinger of your other hand strip away the fibers to expose the core directly in front of the pinch point. Tie off the Fritz on the exposed core. Let go of the pinch and remove the excess Fritz. If a few errant fibers are still poking after out after tying off pluck them using a pair of hackle pliers. With the head area clean and tidy build up a slightly oversized head of bright or fluorescent thread to serve as an additional trigger point.

Some Blobs feature tails, some do not. The choice is up to the tyer. I use bright pearlescent Flashabou or Crinkle Mirror Flash tails most often. Other choices include a stubby marabou tuft or vivid Glo Brite floss.

Another Blob variation came about from certain English fisheries banishing the Blob’s distant cousin the Booby. Flies with the Booby’s signature foam eyes were banned. Although Boobys can be deeply inhaled by aggressive trout many English have not adopted catch and release as is so common here in North America. The Booby ban is not a result of potentially injuring trout. The ban is presumably due to the tactics and methods these patterns promote. A reputation, once again, the Blob is now suffering from. To circumvent this ban, creative tyers moved the foam cord used to form Booby eyes to the Blob’s tail section creating a buoyant back end. This new creation, dubbed the F.A.B. or Fat Arsed Blob has become increasingly popular and is a variation worth integrating into your own Blob selection.

Attractor tactics and patterns are not in common use with every stillwater fly fisher. But on those days when trout seem reluctant to play, patterns such as the Blob stripped through the water using brisk strip pause retrieves often saves the day. Stash a few Blobs in your fly box so you aren’t caught watching when you could be catching.