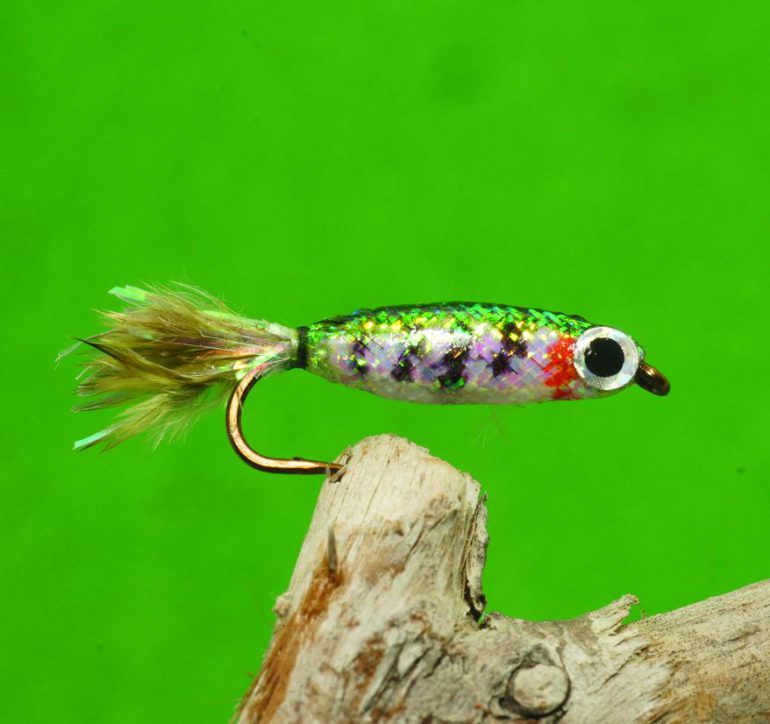 Predatory trout accustomed to supplementing their diet with minnows, fry or other bait fish often herd and chase their prey into shallow areas or drive them to the surface where they ambush them from below. In order to be successful using minnow or fry patterns it is important to keep your fly high in the water. Line choice helps but having a buoyant pattern is a definite asset. When prospecting deeper water in and around rocks, weeds, branches and other sunken debris, patterns with a reduced sink rate also tend to remain snag free. To cope with these presentation demands, I developed the Foam Minnow, inspired in part by Hal Jansen’s realistic looking Epoxy Minnow.

The key to the Foam Minnow is its buoyant 2mm sheet foam core. Start by trimming a narrow, hook-gape wide, foam strip. The hook gape standard ensures body consistency, no matter the hook size. A paper cutter is a great tool for producing a quantity of consistent-width foam strips. Cut a twice-the-shank length section from the strip. Stab the hook point through the centre of the foam at its mid-point. Slide the foam strip around the hook bend and up onto the shank to within two hook-eye widths of the hook eye. Leave space at the front of the hook to ensure there is enough room to tie in the Mylar piping body tight behind the hook eye. Place the hook into the vise. Lay a bead of gel type superglue along the shank. Gel type superglue holds its position without running all over the place. Fold the foam strip along the sides of the shank. A quick two to three second pinch secures the foam in place. Remove any excess superglue that seeps out. Trim the foam underbody at each end to suggest the tapered profile common to most bait fish. Shape carefully, as with each cut you remove floatation.

Hook choice also factors into the pattern’s overall buoyancy. I prefer a 3xl straight-eye streamer-hook. If you use a non-slip loop knot to attach the fly to the tippet, a standard down-eye 3xl hook works fine. I avoid 4xl or longer shank hooks. As a trout shakes its head during the fight, extra-long shank hooks often lever themselves free. Don’t be seduced by straight-eye stainless steel saltwater hooks. These hooks created great looking flies but proved too heavy and my Foam Minnows sunk far too fast.

Marabou and fur clumps make excellent tails. Grizzly marabou or the soft fibers at the base of a dyed grizzly hackle feather are my current favorites. The barred markings of a dyed grizzly feather suggest the banded markings common to trout or salmon fry and many small minnows.

How the pearlescent Mylar piping body is formed is key. After removing the yarn core, most tyers slide Mylar piping over the shank securing it at the hook eye and then at the rear of the hook. This process involves using a second bobbin or reattaching the tying thread in order secure the Mylar piping body in place. After removing the yarn core, I push Mylar piping over the hook eye and secure one end in place right behind the hook eye using firm thread wraps so the balance of the tubing protrudes out in front of the hook. Stout tying thread such as GSP ensures a firm tie in. I then move the thread to the rear of the shank using open, wide wraps and let it hang.

Be careful not to wrap the thread too tight over the foam underbody as this reduces pattern buoyancy.

Using the thumb and forefinger, stroke the Mylar piping back over itself, folding it inside out and down the shank in the process. Pull the errant strands back around the hanging thread into the tail. Pinch and pull the Mylar to form a compact body and secure in place. Using this technique ensures a tight body without having to remove and reattach the tying thread or to involve a second bobbin. The blunt nose this method creates better mimics the look of many minnows or fry. The errant strands trailing back into the tail can be left as is or trimmed to length and volume. I prefer using just a few strands mixed into the tail.

Permanent markers provide the distinct body markings. My favourite combination consists of a dark olive back, thin black vertical bars along the sides and red gill slashes. Pearlescent Mylar piping is semi-transparent so the underbody colour affects the fly’s overall colour scheme. With this in mind, darken the top of the white foam underbody to further accent the dark backs common to many minnows and fry.

Eyes are a critical component to any successful bait fish pattern. The Foam Minnow is no exception. I prefer stick on eyes as they are easily locked in place with a few coats of UV resin. Prior to removing the eyes from the backing, fold the row of the eyes you are going to use horizontally down the middle. This trick cups the eyes so they better fit the rounded profile of the Mylar body. Coat the finished fly two to three times from head to tail using thin formula UV resin. Applying several thin coats ensures a smooth and even build up. The Foam Minnow is a realistic looking fly that appeals equally  to both the fly fisher and the fish.