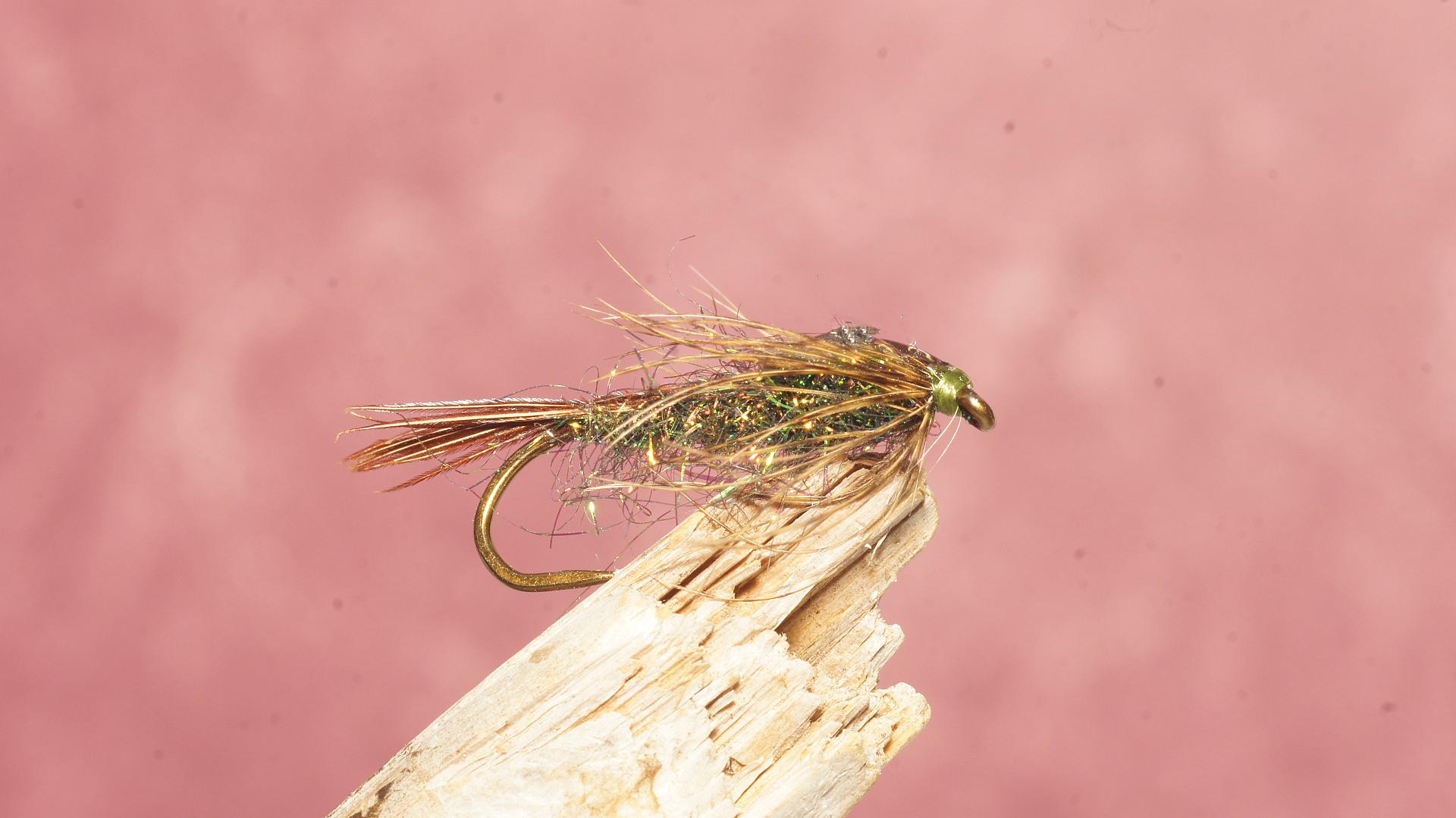 I divide fly patterns into three basic categories, suggestive, imitative and attractor. Each pattern category has a set of conditions when I am most likely to use them. Imitative patterns work best when a match the hatch philosophy is required, a common occurrence during the spring and early summer when chironomid emergences are in full swing. If eliciting a feeding response is tough, trigger a strike using an attractor. Mobile or garish attractors such as Boobies and Blobs appeal to a trout’s natural curiosity, protective spirit or its aggressive instincts. Suggestive patterns cover a number of bases. They don’t match any one food item but have a number of traits common to many potential food sources. When exploring new water or when trout are in an opportunistic frame of mind suggestive patterns work best. Some of the most recognized suggestive stillwater patterns include; the Carey Special, Halfback, Hare’s Ear Nymph, Prince Nymph, Pheasant Tail Nymph, Woolly Buggers even the Doc Spratley, although I admit to not having much success with this fly.

Suggestive patterns don’t represent anything in particular. The best patterns are simple, uncomplicated and mobile featuring a scruffy unkempt buggy appearance that appeals to both fly fisher and trout. Mobility is a key trigger. To a foraging trout, patterns brought to life through material choice, retrieve technique and the non-slip loop knot tick all the boxes and are seldom ignored.

Bodies constructed from coarse dubbing such as seal’s fur mohair, Ice Dub and UV enhanced blends with a touch of fluorescence are personal favourites. Dubbing adds translucence, a characteristic common to many food sources. Peacock herl, either natural or dyed, is another favourite material. The natural shimmer of peacock herl is tough to resist.

Soft hackle feathers such as partridge, hen, pheasant rump and guinea move under the slightest of movement and make an excellent addition to any suggestive pattern. Whenever possible I always look for a reason to add one or a combination of these hackles to my suggestive patterns. Long flowing marabou tails are also common to a number of suggestive favourites. The Woolly Bugger is probably the most famous.

Flash, used in small strategic doses, is another common pattern component. A subtle hint is all that is required. Mylar wing cases and shellbacks, coated with UV resin to enhance flash and add durability, work well on suggestive nymphs. Crystal Flash works well on its own or blended into tails and hackle. No marabou-tailed pattern would be complete without a splash of Flashabou.

My Fly Craft Fullback is a straightforward tie but there are a few tying wrinkles worthy of discussion. Pheasant tail is used to form the tail, shellback and wingcase. Originally I used to tie in the tail separately forming the shellback and wingcase out of a second application of pheasant tail. I now employ a technique Skip Morris uses when tying his Skip Nymph that speeds up the tying process. After tying in the wire rib and body, tie in a pheasant tail clump just in front of the body, so the tips extend past the body, roughly half the shank. Spiral the rib forward, reinforcing the body and binding the tail and shellback in place in one single process. After tying off the rib, secure in a section of Mirage Opal Mylar back over the body and shellback. Secure the remaining pheasant tail back over the body and Mylar. Once the thorax and hackle are complete pull the remaining pheasant tail and Mylar over the thorax to complete the wingcase.

When incorporating feathers such as partridge or mottled hen, many tie in and wind the hackle once the thorax is complete. The feather is tied in by the tip in a confined space using minimal thread wraps to avoid building up an oversized head. The drawback to this approach is that if you aren’t careful when you wind, it is easy to pull out the hackle as it is secured by just a few wraps of thread. A better alternative involves tying in the hackle just back from the hook eye by the butt and securing the stem along the shank prior to forming the thorax. The hackle feather never pulls out and any bulk created during the tie in process is buried beneath the thorax.

Suggestive patterns should occupy significant real estate within any stillwater fly box. Thankfully, trout don’t take entomology courses. Trout are opportunists, willing to eat whatever crosses their path. In order to survive trout must eat. Suggestive patterns mimic a number of potential food sources. They make excellent choices when exploring new water or when it isn’t clear what trout might be focused on, especially during the fall months when seasonal hatches are long complete. During the fall, trout must pack on calories to build enough fat reserves to carry them through winter. Sensing the onset of winter trout aggressively scour the shallows pouncing on bread and butter food sources such as dragon nymphs, damselfly nymphs, and scuds making suggestive patterns such as my Fly Craft Fullback an excellent choice.

Tying Note: Coat wingcase with UV resin for added durability and shine. Don’t be afraid to integrate your favourite body materials and colors.

How to Tie the Fly Craft Fullback