I don’t usually hunt bears in the early morning hours, but the trail camera photos proved that a few certain big bears appeared at both dawn and dusk. It was May long weekend and the rut was just starting to get going. I saw the bear coming in for about 150 metres, but it was hard to judge him as he was constantly on the move and never in the clear. He came right into eight metres and I could see a distinguishing scar on his right eye. I knew right then, because I had judged his size earlier from still pictures, that he was a shooter. I drew my bow back and shot. 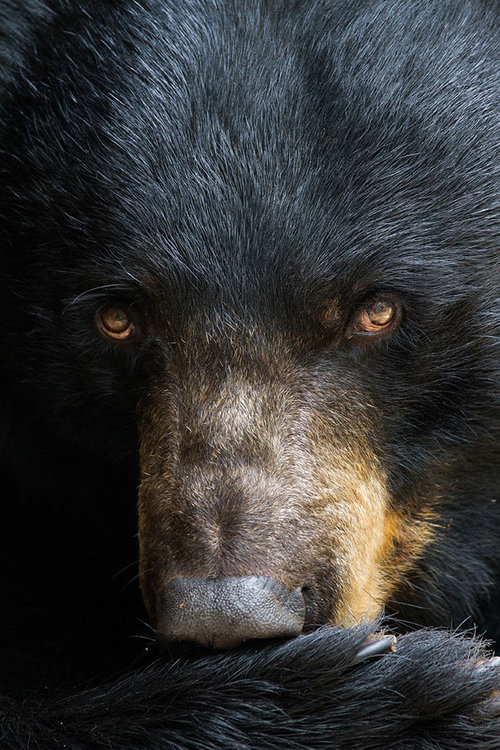 Black bears are a popular species to hunt, likely second only to whitetail deer in North America. No matter which season — spring, summer or fall — it’s difficult to field judge a black bear for trophy quality. Species with antlers are much easier, as you can physically see what is going to be scored. Inexperience can make any bear look large and there are no guarantees that a large bear is going to make the record books because it’s the hidden bone of the skull that is measured. Some bears have meatier heads. Some bears are massive and weight half a ton, but do not score as expected. Finally, there are lanky bears with skinny faces that score high, surprising the hunter.

The key to field judging black bears is time and knowledge. As the old carpenter saying goes, measure twice and shoot once. But what does big really mean?

The definition of a big black bear begins with the sex of the bear. Male bears, commonly known as boars, are big. Sows (female bears) are generally never larger than 300 pounds. Boars can exceed weights of 500 pounds. Officially, as the record books measure, a bear’s skull is the only consideration when applying for entry.

As with most hunting, it starts with scouting. If you find a pile of bear scat, it is not the size of the pile or the length of the scat, but the diameter of the scat. It should be about the size of a soda can on a very large bear. Another trick of the trade, which I have never found to be accurate, is that if you find a bear track, you measure the width of the front paw in inches, add one and change engineering units to feet. The resulting number gives you an estimated square size of the pelt. If you find either large scat or large tracks, hunt in that vicinity, as big black bears generally have small ranges in excellent habitat. Some examples of good habitat are berry patches, riverside meadows, clover patches along pipelines or roads and finally oat fields in agricultural areas. Big bears have earned the right to live in the best habitat. They continually chase and fight off lesser bears, forcing them to live elsewhere, in lesser habitat, for fear of their safety. If you are continually seeing a bear in good habitat at dawn or dusk, it is likely a big boar.

Big bears have the attitude and swagger of something that does not have to do anything for anyone, ever! They come across very tough, like the biggest, baddest dude around. This is a distinguishing behaviour from sows. Sows can be big and attempt to be dominant, but they will rarely have this tough-acting attitude and behaviour.

Usually sows and juvenile bears are very skittish. They are on edge all the time and constantly watch for danger, as they do not want to be attacked by a bigger bear. Big bears bully other bears. They do not want them around – big bears are loners except during the rut. Dominant bears feed on schedule, act fearless and have rights to the best food throughout the day.

As I mentioned earlier, sows rarely weigh more than 300 pounds, but in this size range, it’s hard to determine the sex. It is not so much the physical characteristics of a bear that give away its gender, but rather its behaviour. If you see a bear standing tall on its hind legs and rubbing its back against a tree, it’s a boar. If you see a bear distributing its scent by straddling small shrubs and breaking off spruce trees or rubbing, it’s a boar. But what makes a big boar stand out from an average boar?

Large, trophy-size bears have rounded chests and a low-hanging belly just barely off the ground, swaying side to size as it walks. They monopolize the best feed and habitat, and it shows. Because of their big belly and out-of-shape physique, their legs can appear short. When they are on all four legs, the top of their back is at least waist-high on an adult human.

Perhaps the most distinguishing feature that I look for is that the front half of the bear is full. It appears to have broad front shoulders and a large neck, The shoulders have the same width all the way down, right to the paw, like fence posts. Depending on the time of year, the hide can appear full and fluffy, but it can be hard to distinguish shadows. Big bears have a big frame and fill out that frame especially in the front half. As for the length of the bear, six feet from the nose to the tail tip is minimum. Sows rarely exceed this length.

If you’re in the market for a beautiful bear rug, you’ll want a thick, shiny and luxurious pelt. The pelt should be free from disease, fighting scars, scratching or rubbing. Bad rubs are telltale and easy to spot; however, subtle rubs might not look like much before you pull the trigger but can lead to disappointment when picking up your finished product from a taxidermist. Make sure you look over the bear’s entire hide, on both sides, before deciding to shoot if your goal is a nice bear rug. Bears in the fall will have more raven wing-like glossy hides. Spring bears will appear dull but have a fuller look. The size of the rug is important, but once again, it’s very hard to judge when a bear is alive. To measure the size of the rug, you take the distance from the nose to the tail tip and the distance from one front paw to the other, add them together and divide by two. This number is the square size of the fur. The height of the bear’s back and the length are two crucial measurements when deciding if a bear has a pelt covering a large frame or not. Most black bears are, in fact, completely jet black in colour; however, they can also come in blond, brown, cinnamon, chocolate and cream. Often these rare colours are what a hunter may be after and will tend to shoot a smaller-framed bear just for the hide.

When you shoot an animal with antlers, you can immediately begin scoring the animal under the Pope & Young or Boone & Crockett scoring system (if you know how). Black bears do not have that same luxury and you must remove the skull and measure its width and length to calculate its score. There is no guarantee when looking at a live bear’s head to predicting its skull size. However, there are some feature you can look for on older, mature bears that increase the likelihood for a larger skull.

The first giveaway is if a bear is looking at you and has dog-like or Mickey Mouse ears that appear large, long and stick up straight from its head, you are likely looking at a small bear. If the ears look small and are eight inches apart, off to the side and back of the head, it has a big head. Big bears have a squarish snout, and a dish-like face as if somebody pushed their snout into their skull, flattening their face. Older, big bears will have battle scars. Things like torn ears or scars on their muzzle, eyes and forehead. The most distinguishing feature of a large-headed bear is that they can have a centre crease down the middle top of their skull.

When I first started bear hunting, I found it very difficult to judge the size of a bear, especially because I had not seen many, either on camera or live. Look at as many trail camera pictures and live bears as possible. Watch them for hours. Bears are proportional, so the closer you are, the better. Big bears always look big, but small bears can also look big depending on how far away they are. They can easily be overestimated, leading to ground shrinkage and disappointed hunters. I have guided a few bowhunters who had never seen a black bear before and really had no idea whether it was large or small. That is where references come into play.

Before you go hunting, you need to decide what a trophy bear is for you. Do your homework and decide what you are going to be happy with. If you happen to get a one-in-a-million colour phased, 500-pound bear that makes Boone & Crockett, great. If you don’t and it’s  a couple inches shy, don’t fret and be proud of your accomplishments. It just means you can hunt again and try for a bigger one.

Measurements are taken with calipers or by using parallel perpendiculars, to the nearest one-sixteenth of an inch, without reduction of fractions. Official measurements cannot be taken until the skull has air dried at a habitable room temperature for at least 60 days after the animal was killed. The 60-day drying period for a skull that has been frozen or boiled begins the day it is removed from the freezer, boiling pot or submersion in any liquid. All adhering flesh, membrane and cartilage must be completely removed before official measurements are taken.

A. Greatest length is measured between perpendiculars parallel to the long axis of the skull, without the lower jaw and excluding malformations.

B. Greatest width is measured between perpendiculars at right angles to the long axis.

Add A & B together to come up with your black bear score.