How Sweet It Is: Browning’s A5 Sweet Sixteen

While big game hunting has been a driving force in my life, bird hunting remains a passion, amped up every fall by those wily, ring-necked roosters.

There is just something magical about my four-legged hunting buddy unraveling a hot scent and busting that rooster into a ruckus flush. It tends to become immortalized in one’s memory bank, retrieval of which tenaciously draws you back into its addictive web year after year. My array of shoguns and bird dogs that have come and gone over the years reflect that. Quick and nimble 20 gauges for those tight-sitting, early season birds, and the extra fire power of a 12 for those spooky late-season birds. Right? Well, not as often as I would have liked. While the 20 proved ideal for those early birds, the slower-handling 12 frequently stretched my shot gunning prowess on those crafty, long-range, late-season flushes. But is there one gauge or shotgun that might just do it all? That question has been rumbling around in the back of my mind for decades. One might then ask, “Why not a 16 gauge?” 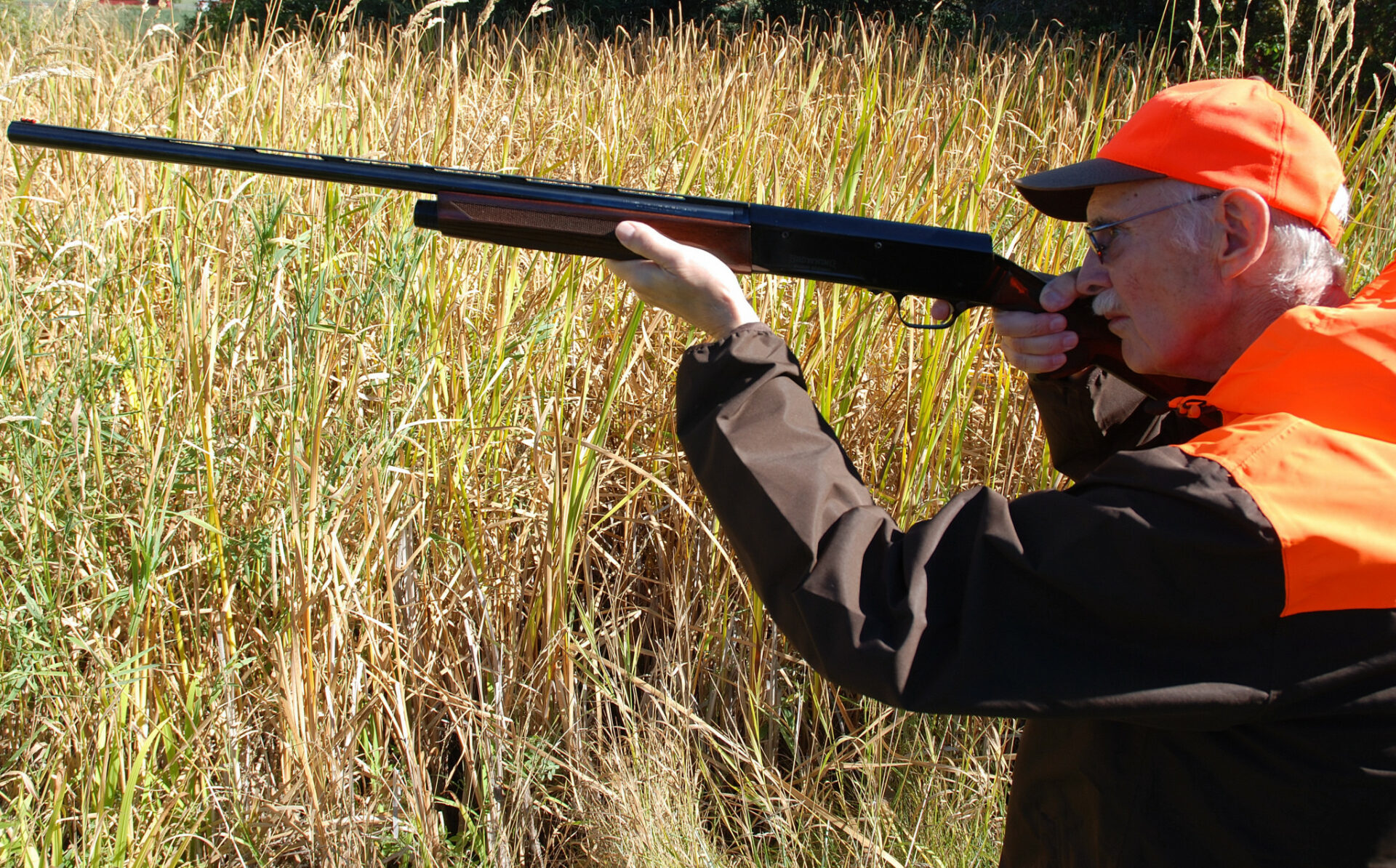 The 16 certainly isn’t a newbie, having reached its peak of popularity in the 1940s and 1950s, when a quarter of all shotguns sold were actually 16 gauges. While the 16 certainly hits that sweet spot between the 12 and 20, it never garnered sufficient hunter interest to outsell either. For me, it related to the comparative availability of ammunition. So, in 2016, when Browning reintroduced the A5 Sweet Sixteen, I admittedly wasn’t the first in line to evaluate its potential. In fact, I waited to ascertain if it would even survive its introductory year. Well, it did! But the question remained, would it garner a long-term place in the hearts of bird hunters? By the time 2020 rolled around, I decided I could wait no longer. I needed to find a quicker and lighter all-season, one-gun solution.

For starters, let’s not confuse the 2016 reincarnation of the A5 Sweet Sixteen with the old Auto-Five Sweet Sixteen. While they may share that very identifiable humpback profile, they are different guns.

As Browning has developed its own unique nomenclature for many of the A5’s key features, I will delineate these with a brief description on performance.

Other notables include shims for cast, drop and length of pull; smaller 16-gauge receiver; grade l Turkish walnut stock with 18 lines per inch checkering; fiber optic front sight; zero point of impact, which ensures 50 per cent above and 50 per cent below patterns; barrel length options of either 26 or 28 inches; chrome-plated chamber; and three Invector DC choke tubes in full, modified, improved cylinder.

Before I delve into why I fell in love with this shotgun, I need to address the elephant in the room. And here it is: With all the 20-gauge options out there, one might ask why a 16-gauge shotgun when I can stoke up a 20 with three-inch, one-and-one-quarter-ounce loads that duplicate the heaviest 16-gauge loads. The simple answer is they just pattern heavier loads better than a 20. Those heavy 20-gauge loads that are stuffed beyond bore capacity can lead to less consistent shot strings and poorer patterns, whereas the larger bore size of the 16 handles those one-and-one-eighths and one-and-a-quarter ounce loads more consistently, resulting in cleaner and more consistent kills.

At five pounds, 12 ounces, this was one delightful shotgun to handle. It fit and balanced about as perfectly as I could have asked for and the longer sight line aided by the humpback profile provided extremely quick-on-target acquisition. Marvelous! My one and only negative comment about this gun was its trigger. At a pull weight of six pounds, two ounces, its pull weight was heavier than the gun. Knock a couple of pounds off that and problem solved. The only test problem I encountered was a lack of diversity in ammunition. Escalating demands in the US and COVID-19 no doubt played a role in this shortage, but I was able to acquire both target and game loads from Browning and Remington. For those who may worry about the general state of ammunition availability, here is a list of companies that are now making 16-gauge shotshells: Browning, Winchester, Federal, Remington, Fiocchi, Hevi Shot, Kent, Estate, Aguila and Nobelsport.

On the range, using an equal amount of ammunition from both companies, I divided my test into two components: First was a lengthy session on the trap range with one-ounce #8 target loads and, second, I patterned one-and-one-eighths ounce #6 game loads at 35 yards using Birchwood Casey Mallard Splatter targets.

On the trap range, my son, Brent, and I launched 100 clay birds, 50 each. For my 50, and in order to fully assess this shogun’s quickness, I did not shoulder the gun until the bird had left the trap. Using a modified choke, I missed a paltry four birds, with a goodly number of hits being dusters. I was some impressed. Brent may have missed a couple more, but in total we bust about 90 out of 100 clays.

I then moved to the 35-yard pattern board and patterned two Browning BXD Upland and two Remington Pheasant one-and-one-eighth-ounce loads. I then counted all the hits within each quarter section of the target’s 10-inch centre circle.

This shotgun was not only a joy to shoot, but it also performed beyond my expectations. The recoil was mild and its on-target acquisition was second to none. It also patterned well, providing consistent above, below, left and right shot dispersion. While the total number of hits were about the same, Browning BXD Upland tended to pattern just a bit more consistently than Remington Pheasant. Either would make excellent pheasant loads. No matter the season, there is no longer any doubt about which shotgun I would prefer to shoulder on my next pheasant hunt – the Sweet Sixteen definitely hit the sweet spot.