The ocean off the BC coast teems with a great variety of sea life, including an unusual group of demersal (living on the ocean bottom) fish called flatfish. They have evolved so well for life in that habitat that they are compressed laterally (flattened) and lie on their sides. They have both eyes on one side of their head, so are always looking up. Flounders are one group of flatfish, which includes several species, divided into the “right-eyed” (Pleuronectidae family) and the “left-eyed” (Bothidae family). Pacific halibut (Hippoglossus stenolepis) are really big (up to 220 kilograms and 2.75 metres long) right-eyed flounders that can be caught by BC sportsmen. 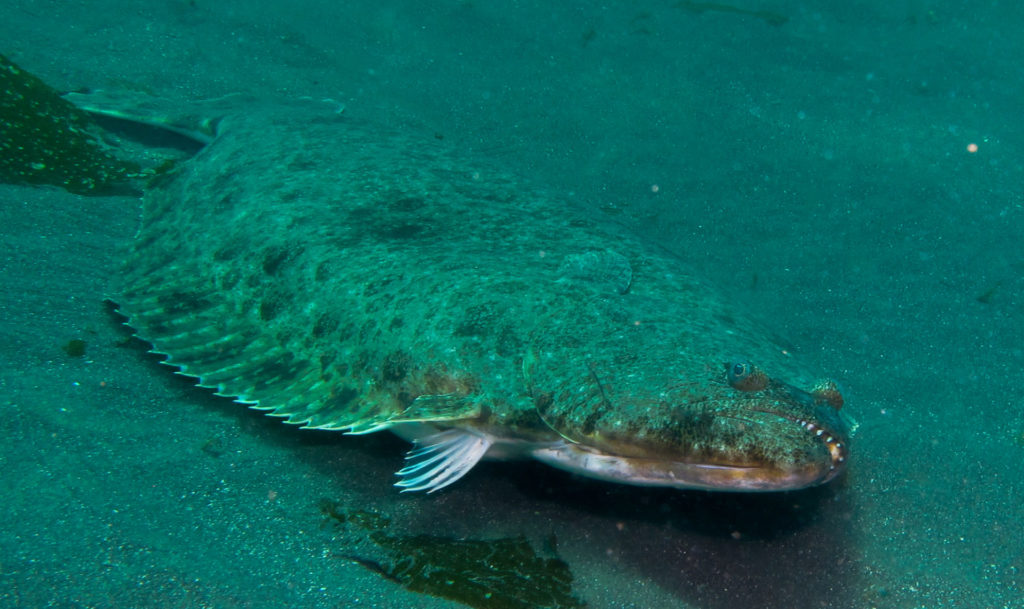 There are at least 500 species of demersal flatfish found in oceans around the world, but recent genetic research suggests that the evolution of migrating eyes happened only once. These fish begin life swimming upright in the water, with eyes on each side of their head. However, soon after hatching one eye begins to migrate across the skull until both eyes are on one side of the head. This process can take months but once the eyes are in place, that change is permanent. Flatfish then spend the rest of their lives swimming on their sides and looking up into the water column from the bottom of the ocean. The pigmentation of the skin on the eyed side is mottled olive, brown or black to blend in with the surrounding sand, rocks and algae on the ocean bottom. The fish’s blind side is pale, and in Pacific halibut is white. When these fish are swimming above the bottom, their pale underside blends well with the bright sunlit ocean surface and they are thus camouflaged from predators above or below. Sea lions or sharks may prey on halibut, but when full-grown, halibut are big enough to have little to fear from other fish.

The body of a halibut is flat and diamond shaped, with fins around the margin. In the centre of each side, the fins are slightly longer and come to a point, which enhances the overall diamond shape. The outside of their body looks smooth because the scales are small and deeply imbedded in their skin.

Halibut are big fish and take a long time to mature. Females are much larger than the males. Most female halibut are sexually mature at 11 years, while males mature at seven or eight. Halibut can apparently live to be 50, but most live less than half that long. The spawning season is mid-winter, in deep water (600 metres) along the edge of the Continental Shelf from BC to the Bering Sea. Each year, after migrating to the spawning beds, each female produces between 500,000 and four million eggs, becoming more fecund with age. They release the eggs in batches over the spawning period and fertilization occurs mid-water from the sperm released by the males. In spring, after spawning, the adult halibut move back to shallower water, where food is more plentiful. The larval halibut drift with the ocean currents, feeding on small shrimp-like animals called euphausiids. After about six months, the young halibut have achieved their adult form and settle on the ocean bottom close to shore. Halibut are predators and the menu includes cod, herring, sable fish, octopus, crabs, smaller flatfish, including young halibut, and just about anything else they can fit in their mouth.

The annual seasonal migrations from the winter spawning sites in deep water to the summer feeding grounds nearer to shore, means that these fish are available to anglers with a suitable boat and heavy-duty tackle. Halibut can be caught on a variety of baits and large lures, but with enough weight to get the hook to the bottom. Occasionally, while slowly trolling for salmon, an angler might be surprised to be hooked to a “barn door.” The largest halibut are likely to be females and regulations often require that they be released to spawn again. The size limits and possession limits can change, so sportsmen need to check the regulations (http://www.pac.dfo-mpo.gc.ca/fm-gp/rec/index-eng.html) each spring before setting out. The current record for sports caught halibut is 208 kilograms, landed near Alaska in 1996. However, fish that size are unusual. More commonly encountered, and usually legal to keep, are 10 to 20 kilograms.

It is not just size that attracts sportsmen to this species. Halibut are prized for their firm, white, mild-tasting flesh. “Delectable” is a good adjective. BC sportsmen are fortunate to be able to pursue this tasty marine biological oddity, a giant, right-eyed flounder.