An Adventure On Quadra Island

I am a big fan of islands, particularly the Gulf and Discovery islands. They’re surrounded by water (which means fishing), they’re small (which means you can get around them easily) and they usually have more character per square kilometre than their landlocked counterparts. In the wake of the remote-working-as-a-legitimate-means-of-doing-business era, as prompted by our favourite pandemic, my wife and I took the opportunity to mix work and play by spending a week working remotely and playing locally on Quadra Island. 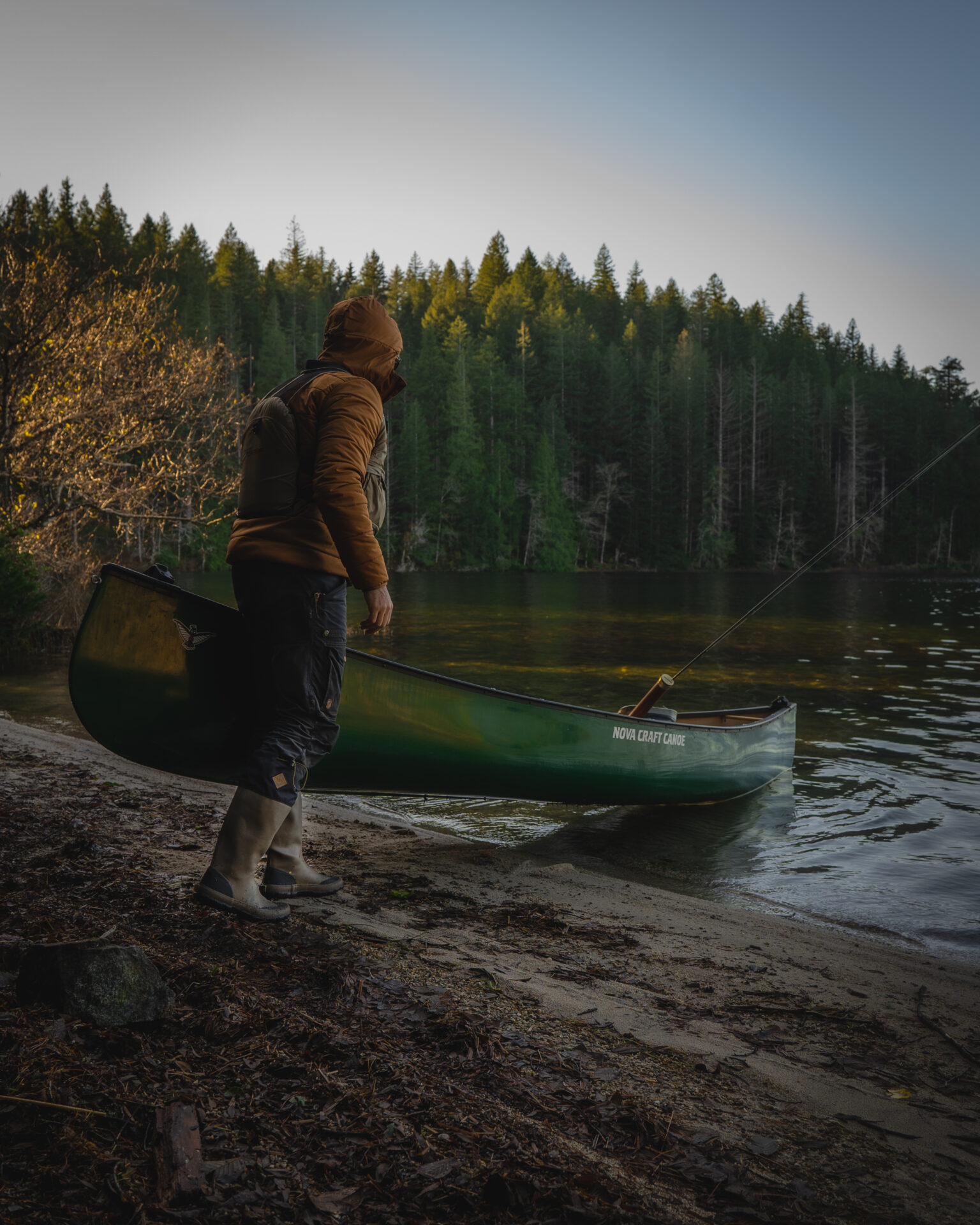 For me, the Discovery Islands are just the right size, with enough intrigue to keep you sated and space to keep you sane. When we’d planned this trip, I had a few activities that I absolutely wanted to tick off: filling the freezer with winter feeder chinook and flicking a few flies on Main Lake via canoe, while hopefully testing out a new recipe at the same time. Fortunately, I was able to do both.

Living in Vancouver, we don’t exactly have an abundance of space in which to live and store bulky items; however, we do have a small canoe-sized space that we have managed to covertly store our Nova Craft Prospector 15-foot canoe, affectionately known as The Canoodle. After a full day of staring at faces in boxes and wrestling with Zoom fatigue, I loaded up the Jeep with the week’s provisions: laptops, chargers, fly fishing gear, the Canoodle, the boat gearbox, and the finest wet weather gear Fjallraven has to offer.

Taking a ferry always makes the journey feel a little bit more adventurous to me, like we’re traveling somewhere exotic and exclusive, even if it’s only a couple hours away. This was my first time to Quadra, so it really was exotic for me. Arriving at night, the scale of the island was reinforced by the time it took to get from the ferry terminal to the Airbnb, which wasn’t much. At daybreak, we discovered that we had a stunning view of the ocean right out to Campbell River, with seals and various birdlife frolicking in the surf right outside our place. When my colleagues in the UK realized I didn’t have my usual Zoom background and asked where I was, a panning shot of the view quickly brought into perspective how lucky we are in BC to have this type of scenery on our back doorstep.

When I’m in a new spot, an unfamiliar fishery, or if I just want to get to know a place, hiring a reputable guide is my go-to move. I was referred to Gene Berkey at Sea Beyond Adventures through a series of acquaintances and when his Grady-White pulled up to the dock outside our place, a mere 50 paces from the front door, his firm handshake and welcoming smile set the tone for the day. As soon as we set foot on his boat, it was apparent that Gene has fished once or twice before. This was then confirmed when he dropped the downrigger, and in less than five minutes we had the first of what must’ve been a dozen or more feeder chinook to the boat. Rather than running bait, Gene ran plugs with no flasher. Coming from Vancouver fisheries that get pounded by fishing pressure, I thought this was a bit of a rogue move, but the proof of the pudding was in the eating. We were generally on them all day. Gene explained to me that the flasher takes away a lot of the pleasure of fighting a fish, so running mono straight out to the plug gives you a better connection to the fish. I couldn’t agree more. We got into a whole hell of a lot of fish, mainly little guys who lived to see another day, but we got into enough good-sized feeders that my wife and I both limited out. With exhausted forearms and fodder for the freezer, Gene dropped us off back at home base. What a day, and what a week of fresh salmon dinners.

What kept me going through the arduous hours of laptop monotony in the work week that followed was the knowledge that we had a canoe trip on Main Lake, further north on Quadra Island, up next. A 15-foot prospector canoe is, in my opinion, an excellent fishing platform for two people. As long as nobody is thrashing about, and everyone actually knows how to wield a paddle and keep their centre of gravity between the gunwales, it’s near perfection.

Given that I haven’t fished Main Lake before, our outing was equal parts peaceful paddle and fishing. In an over-confident move that has often led me to drawing a blank, I’d brought all the fixings for a shore lunch in the hopes that I’d connect with a lunch-sized trout. As it turns out, Main Lake had its own ideas about me catching fish.

We paddled the perimeter of the lake looking for structure and other fishy features. There are a good number of deadheads around the lake that had resulted in some short strikes, but I ended up donating more flies to the lake than I care to recount. Finally, after putting a good few miles on the canoe, we found a little inflow creek and we posted up within casting distance. Giving a dark purple egg-sucking simi-seal leech a quick strip proved to be the ticket, and after a brief back and forth our day’s lunch hit the net.

As mentioned previously, I like islands, so if there’s an opportunity to post up on an island that’s on an island, that is a W in my books. With ravenous appetites, we beached the canoe at an island in the middle of the lake that had a suitable cooking space and ample room to offload our gear. I made quick work of the trout, fileting it up and cutting it into bite-sized chunks for what would become a trout puttanesca. Being of Italian descent, I am a big fan of the briny goodness of puttanesca. Despite the questionable etymology of the dish, which loosely translates to “in the style of the whore,” I find the combination of olives, capers, olive oil and garlic to be absolutely delicious.

Puttanesca comes together quickly and disappears just as fast. For this meal, I didn’t want to bother with a full-on pasta dish, but instead opted to reduce the sauce down and eat it directly off slices of fried bread. After sautéing some finely diced garlic and shallots in olive oil, I added some capers, kalamata tomatoes and a healthy splash of their respective brines. No need to add salt. Once most of the liquid had evaporated, I seasoned with some fresh oregano and pepper before adding in a tin of tomatoes. A thicker sauce makes the end result much more scoopable, so I let the deliciously briny mixture reduce for a while. When I was about 90 per cent of the way there, I turned the heat off and placed the trout pieces into the sauce. With a heavy cast iron pan, there is enough residual heat in the pan (and the sauce) to cook the delicate pieces of trout through. Once the trout went opaque, it was time to dig in. Garnishing with some of the remaining fresh oregano, I scooped up as much sauce as I could with each slice of bread. Wow.

Our trip to Quadra highlighted some of my favourite aspects of living in BC: proximity to stunning scenery, great people and excellent table fare. Being able to live in an urban metropolis and have these locales on our back doorstep is an incredibly fortunate circumstance, global pandemic notwithstanding. Hitting the salt and fly fishing stillwater in the same trip ticked a lot of boxes for me, with the spoils from the trip continuing to impress dinner party guests long after the trip ended. It is tough to beat a winter feeder chinook. If you get a chance, I highly recommend making your way to Quadra Island. What it lacks in size, it makes up for in spades with abundance of natural resources, peacefulness and the fact that it’s an island.