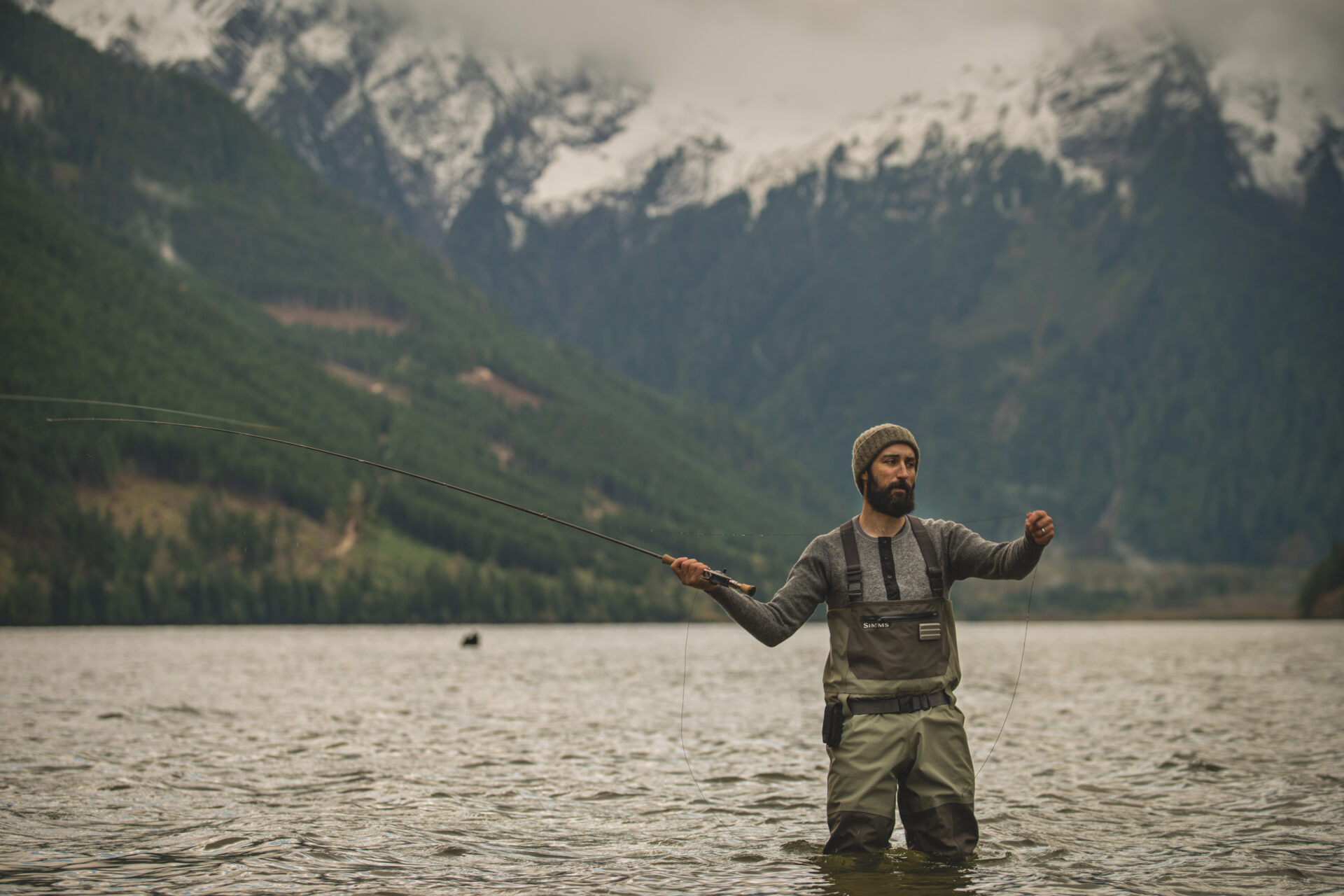 In these challenging times – physical distancing, lockdowns, masks – it feels more special than ever to be able to step out of your tent, draw in a full breath of crisp autumn air and look out on a lake you have all to yourself. After spending a large part of the spring and summer cooped up in Vancouver, any opportunity to get away from it all in the fall was a necessary reprieve, and a lifeline for my mental health. I was fortunate enough to receive a call from some like-minded folks at Ecologyst, who wanted to capture my passion for the outdoors and showcase the catch-and-cook approach as part of their aptly titled, “Food Tastes Better Outside” video series. The plan was to make our way out to a remote mountain lake, camp for a couple nights, catch some fish, cook up a hot meal on shore and generally enjoy some time away from the city.

The evening we arrived, there was just enough time to set up camp before the skies opened up into an absolutely torrential downpour. Given the elevation we were at, it was amazing to watch the lake get pelted with rain while the mountains above us received a blanket of fresh snow. Knowing that an integral component of the meal I planned to cook the next day was a freshly caught trout, I thought I’d get in a few casts before the sun set. Donning my waders and heading out to a nearby shoal, I teased a micro-leech over a drop-off hoping to entice some hungry locals. Sadly, the peace and quiet of the evening wasn’t spoiled by the sounds of line screeching off my reel, but rather by me stepping backwards onto a sloped rock, resulting in an eruption of splashing and flailing as I fell backwards. My waders filled with water, which wasn’t a great start to fishing, but was of high comedic value for the Ecologyst crew! After a quick bite to eat, we all tucked in early, eagerly anticipating the day ahead.

Climbing out of your sleeping bag just below the snowline can be a mental battle, one that I find is quickly soothed by a hot beverage, a warming fire and scheming about the day’s fishing game plan. Long before first light, I split some kindling I’d stashed in the vestibule of my tent to keep dry and lit a fire to get some coffee going. As first light broke, the Ecologyst crew shook off the cold and we got straight down to business: deciding where we were going to fish and, perhaps more importantly, what was on the menu. I’d brought my 15-foot Nova Craft Prospector canoe to ensure that we could efficiently cover water throughout the day and scope out different spots around the lake.

I knew of an inflow creek that produced well for me in the spring, and I thought it would be a good place to start out, despite not knowing what sort of havoc would have been wreaked by recent rainfall and high-water levels. I figured we could fish our way to the spot, dropping anchor periodically in spots that looked fishy and moseying over to the previously productive area. At certain times of year, the lake is punctuated by fields of previously logged stumps; however, the high water had obscured these hazards, leaving them just a few ominous inches below the surface. En route, I dragged a leech behind the canoe as I paddled, with only a few deadheads ending up on the end of my line.

We made it to what I remember being the mouth of the inflow creek. The water level was disconcertingly high, but it still seemed to be fishy enough. Knowing that salmon season was just around the corner and given that the inflow creek was pushing water into the lake, I thought I’d dust off the two-handed rod and get in some casting practice from the creek bank. I’d brought an 11-foot, five weight switch rod, which is an absolute delight to cast paired with a micro-skagit head. Swinging a little muddler pattern into the inflow creek’s current, I quickly got into some feisty cutthroat. As I’d hoped, there were a bunch of fish schooled up at the mouth of the creek waiting for lunch to be delivered to them. These fish weren’t exactly bending the rod into the cork, but they provided some excellent sport, taking to the air frequently, and being very willing to take a whole range of streamers. Once I’d caught, bonked and bled an appropriately sized fish for the upcoming meal, we packed up the canoe and paddled back to camp.

I’d planned to prepare a variation on a pan-fried trout dish I’ve done many times (indoors) in the past. To up the degree of difficulty (and, consequently, the potential for the meal going catastrophically awry), I thought it would be a good idea to bake a batch of fresh focaccia to go along with the dish. At home, I bake fairly regularly with mixed levels of success, but arguably more Ws than Ls; however, when you introduce the unpredictability of the elements into the equation, there are many more variables at play that can deflate your yeast-leavened ambitions.

The first challenge was warmth, for myself, the Ecologyst crew, and the bread. I lit a fire to heat up some water, preheat a cast iron Dutch oven, and keep the feeling in my hands. In order to properly activate yeast, you need to have warm – but not hot – water. If the water is too hot, it kills the yeast; if it’s too cold, the yeast won’t produce gas and you’ll have a very underwhelming disc of flour and water that closely resembles a hockey puck. At home, I’ll use a thermometer to get an exact reading of the temperature, but out in the bush I have a slightly more rustic approach: I’ll dip a finger in the water to get an idea of whether the water is roughly 20 degrees Celsius (too low for yeast) versus 40 degrees Celsius (just right for yeast) versus 60 degrees Celsius (too high for yeast). Once the water was in the ballpark of 40 degrees Celsius, which is around the temperature you’d find in a hot tub, I bloomed the yeast in a cup of water with a bit of honey. After about 10 minutes, the yeast rose and started bubbling – a good sign – at which point I added the wet ingredients to the dry ingredients and kneaded.

To add an extra punch to the focaccia, I roasted some garlic to add into the dough. Cutting the tops off two bulbs, I exposed the cloves, drizzled them with oil and salt and pepper, wrapped the bulbs in tinfoil and put the garlic near the fire for a good hour as I prepped everything else for the meal. When you can squish the tinfoil and the cloves give way, they are probably good to go. I kneaded three-quarters of the bulbs into the dough, saving the last quarter to put on the top. The combination of the roasted garlic and olive oil being kneaded into the focaccia dough elicited some amazing camp-side smells.

Proofing dough outdoors when it’s cold is no small feat. I placed the dough in the 12-inch Dutch oven a couple feet from the fire where the temperature was warm, but not hot, rotating every so often to ensure the cast iron was evenly heated. Once the dough had doubled in size, I poked in the classic focaccia dimples and roasted cloves of garlic before putting the lid on. Piling a layer of hot coals onto the lid and a few below and around the Dutch oven, I tried my best not to peek at the focaccia as it baked (which lets all the hot air out). After about 30 to 45 minutes, a crunchy golden crust had formed and the bread was ready to be set aside to cool.

When you have incredibly fresh fish, you don’t really need to do a lot to it for it to be great. In the absence of a grate, I used flat rocks to create a spot to place the 10.5-inch Stargazer cast iron skillet I’d brought. Once the skillet was ripping hot with some high-smoke-point oil, I placed the trout fillets skin side down. I’d scored the skin side to prevent the fillets from curling up, and I held them down with a fish spatula to ensure that there was as much skin-to-skillet contact as possible. The skin crisped up quickly, and the fillet was fully cooked after a brief sear on the flesh side.

To me, cream sauces have a real comfort-food feel about them, with a touch of luxury. To accompany the trout, I cooked down some onions, in the oil I’d used to sear the fish, until they were translucent. Deglazing with some white wine (that would later accompany the meal), I added in a healthy dose of cream, fresh oregano and parmesan cheese, finishing with some fleur de sel and fresh cracked pepper. Once thickened, I wilted a few healthy handfuls of spinach in the sauce and it was time to eat.

This dish is best enjoyed sitting on the shore of the lake, admiring imposing snow-capped mountains. I dug in, dipping the fresh focaccia in the cream sauce before topping with the fresh pan-fried fish, and finishing it all off with a glass of wine. I was grateful to be able to bring the Ecologyst crew out to share this experience. It reminded me that, in spite of everything that is going on in the world, we can always find a change of pace in the outdoors. And, that food really does taste better outside.