Whether it happens to be a movie, a book or a new model, we tend to speculate on whether the sequel or upgrade will be as good as the original. Such was the case when Browning introduced the Maxus II in 2021. This perception was undoubtedly fueled by my affinity for the wood-stocked Browning Maxus Hunter that I tested a few years back. I saw it as the ideal crossover upland/waterfowl shotgun. It had it all: aesthetic appeal, fit, balance, was quick on point, offered performance technology and the trigger on this shotgun was certainly above standard. In reflection, that left me with the niggly feeling the Maxus II had a pretty tall hill to climb. This, however, was not to be a point-on-point comparison as the II is a very different shotgun, designed for those hunters who seek to bag a few ducks or geese in the foulest of weather and in environs that most of us like to avoid. 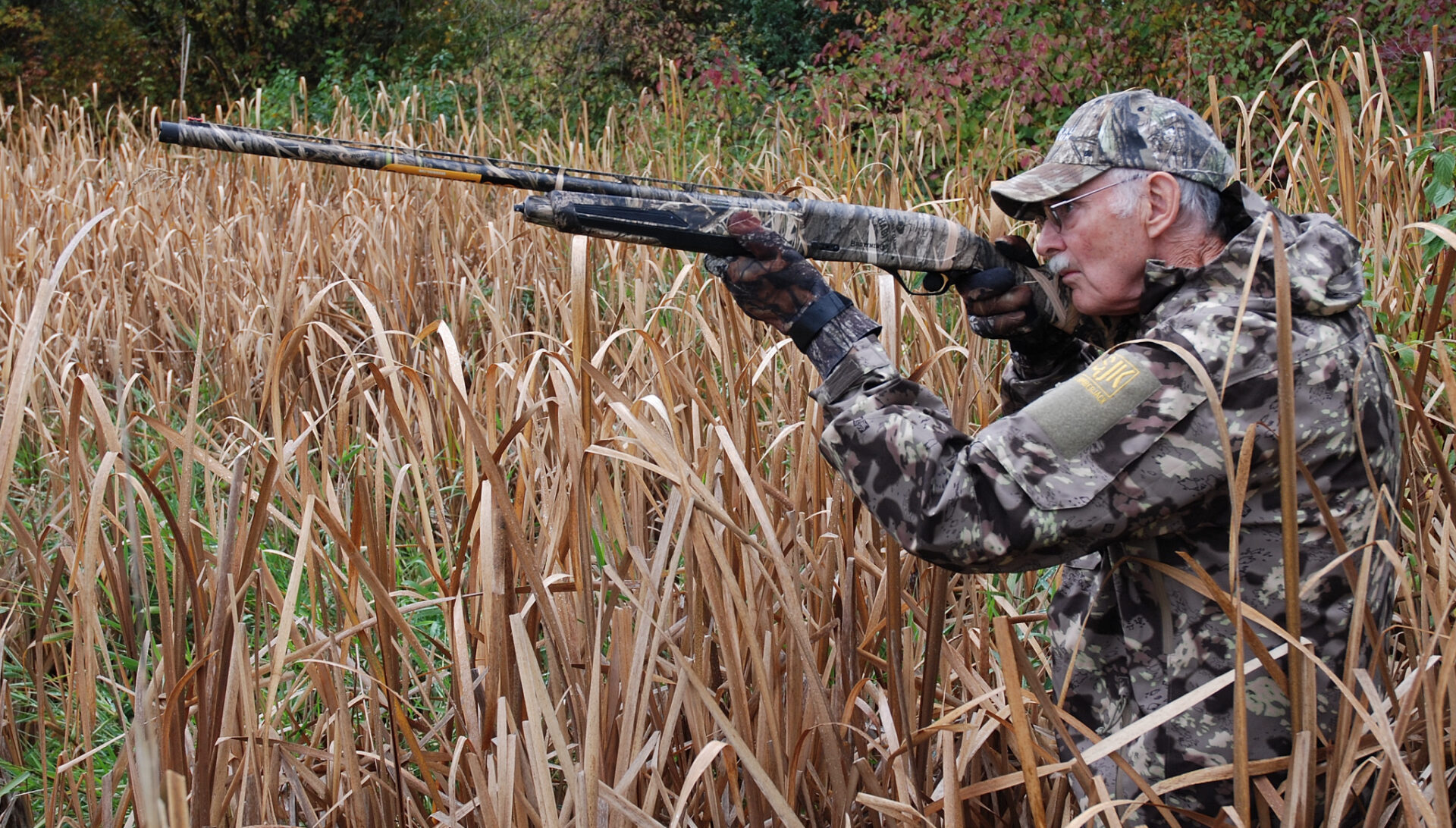 Before launching my discussion on what the Maxus II brings to the table, let’s discuss some very important carryovers. When considering a single-purpose waterfowl shotgun, I have always preferred a semi-auto, and a synthetic camo model to boot. The primary reason is recoil. A long day of shooting magnum waterfowl loads in a pump or double can beat the tar out of you, whereas modern autos, particularly gas autos, do a terrific job of reducing felt recoil. The Maxus II utilizes the same tried-and-true Power Drive Gas System as the original Maxus, which Browning claims is “the best gas piston design ever.” The gas piston features oversized gas ports that vent gases faster when shooting heavy loads, while its 20 per cent longer travel piston stroke improves reliability with lighter loads. All in all, it handles everything from light target loads to those mega magnum loads designed for high-flying honkers. Meanwhile, the original Maxus recoil reduction technology was more encompassing than just its action, as its Inflex Technology recoil pad, back boring and the shotgun’s natural balance also contributed to the gun’s 18 per cent less felt recoil and 44 per cent less muzzle jump than other autoloaders. And while the Maxus II improves on the latter, I was glad to see that Browning didn’t mess with the action – as the often-phrased adage goes, “If it ain’t broke, don’t fix it” certainly applies.

Another highlight carryover is the Lightning trigger, which Browning claims is the “finest fire control system ever offered in an autoloading shotgun.” They might be right. With a lock time of .0052 seconds, which is 24 per cent faster than the nearest competitor, and with its smooth, crisp feel and minimal travel, they collectively equate to a quality shotgun trigger. A couple of other return notables include Speed Load Plus, which will directly chamber the first shell loaded in the magazine, and the adjustability of the stock for length of pull, drop and cast.

So, what were the upgrades? Most are more user friendly, starting with three that I found useful when wearing gloves. They include a new oversized bolt release, oversized bolt handle and a trigger guard that is ramped for easier loading. Foremost, however, are the changes to the stock. While it remains a composite stock with a camo hydrographic dipped finish, the Dura-Touch finish is replaced by rubber over-moldings in key areas including the forearm and pistol grip. This departure may have its roots in some recall issues Browning had with the Dura-Touch finish. Another notable addition to the stock is a SoftFlex cheek pad and a one-and-a-half-inch Inflex recoil pad. These latter two features assist in taking additional sting out of felt recoil, resulting in less bone crunching and quicker follow-up shots. The stock has also been redesigned to be sleeker, for a quicker swing and target acquisition.

Browning also dropped the latched Speed Lock forearm and reverted to a conventional screw-on magazine cap. Other mechanical-related features include a nickel-Teflon coating on the bolt, bolt slide, shell carrier, bolt release and bolt handle; a lightweight magazine tube; a chrome chamber and bore; a fibre-optic front sight and ivory mid-bead; and it comes with a ABS hard case and three extended Invector-Plus choke tubes in full, modified and improved cylinder.

My test gun arrived with a Mossy Oak Shadow Grass Habitat camo finish and tipped the scale at seven pounds, four ounces, a mere two ounces off its advertised weight. At that weight, the gun felt quick in hand and, with its slight muzzle-forward balance, offered a smooth swing – ideal for pass shooting. I also liked the rubber over-molded additions to the forearm and pistol grip. No question they provided a firm grip, adding to the IIs handleability on those days when the weather dictated a day at home in front of the fire rather than in a goose blind. The trigger pull weight on the Maxus II checked out at five pounds, 13 ounces, 13 ounces heavier than the Maxus Hunter. And while both were constant at their pull weights, I would have to give the nod to the Maxus Hunter with its lighter pull weight. But I suspect this difference is most likely just a variance between gun triggers rather than a year or model deviation.

On the range, while not as nimble as an upland gun, it was deadly on the trap range. With my son doing his best to launch birds either in rapid succession or without warning, I missed only a few out of 50 clays. The II ate and spat out Winchester 1 1/8-ounce AA target loads without a glitch, affirming its advertised ability to handle light target loads. I would add a qualifier however, as I was unable to ascertain if this would still hold true for the ultra-light one-ounce loads.

I then moved on to patterning four premium waterfowl loads from Browning, Federal, Remington and Winchester. At 40 yards, I used Birchwood Casey splatter mallard duck targets to assess pattern density and distribution of 1 1/4-ounce #2 steel shot, a load I considered about ideal for most goose-hunting situations. Once again, the II handled these loads with ease, but I must admit that when shooting these heavy magnum loads from the bench, it was a reminder that these goose-busting loads still had plenty of punch.

The concept I had in mind was to appraise the Maxus II as a potential waterfowl shotgun while trying to avoid a direct comparison to the Maxus Hunter. This was easier to do than anticipated as, other than the guts in the action, they are very different guns. For a waterfowl gun, its slight forward muzzle balance provided an easy and smooth swing, and with its sleeker profile offered a quicker-handling gun than some of the other waterfowl autoloaders I have used – ideal in a blind. All in all, this gun improved its user friendliness, particularly in tough conditions, with the most distinctive highlight being improvements to the stock.

In so far as mechanical performance, other than the heavier trigger pull, the II certainly matched the Maxus Hunter and, with its capacity to handle mega magnum 3 1/2-inch loads, would no doubt prove superior on wary geese that hang out there on the edge of your decoys. For target performance, Winchester Blind Side with 20 hits in a 10-inch circle provided the best overall pellet density and distribution, but both Browning Wicked Blend and Federal Premium Black Cloud, with 17 and 16 hits, respectively, were only a tad less effective. In practical terms, while one does not require 20 hits to bring down any goose that flies, the more pellets you can put on target, the better, as it takes a great wing shot to be able to deliver a central pattern hit on each and every shot. And, unfortunately, most of us do not fall into that category.

In final analysis, while we have all seen the advertising lingo “new and improved” countless times, is the improved aspect always so? No need to speculate any longer. The new Maxus II waterfowl models are a definite improvement over their original Maxus counterparts.

The Maxus II waterfowl models boast extended choke tubes versus the Maxus flush-mounted tubes, so I thought it would be useful to include a few comments on the pros and cons. Starting with the pros, there are three that warrant mention: they are easy to change, they protect the end of the barrel and they may, depending on the tube, improve patterns. On the con side of the equation, there are also three that come to mind: they are not, in my mind, as aesthetically pleasing, they add weight to the muzzle, which may or may not be a good thing, and they add length to the barrel, which can be a disadvantage in tight blinds.