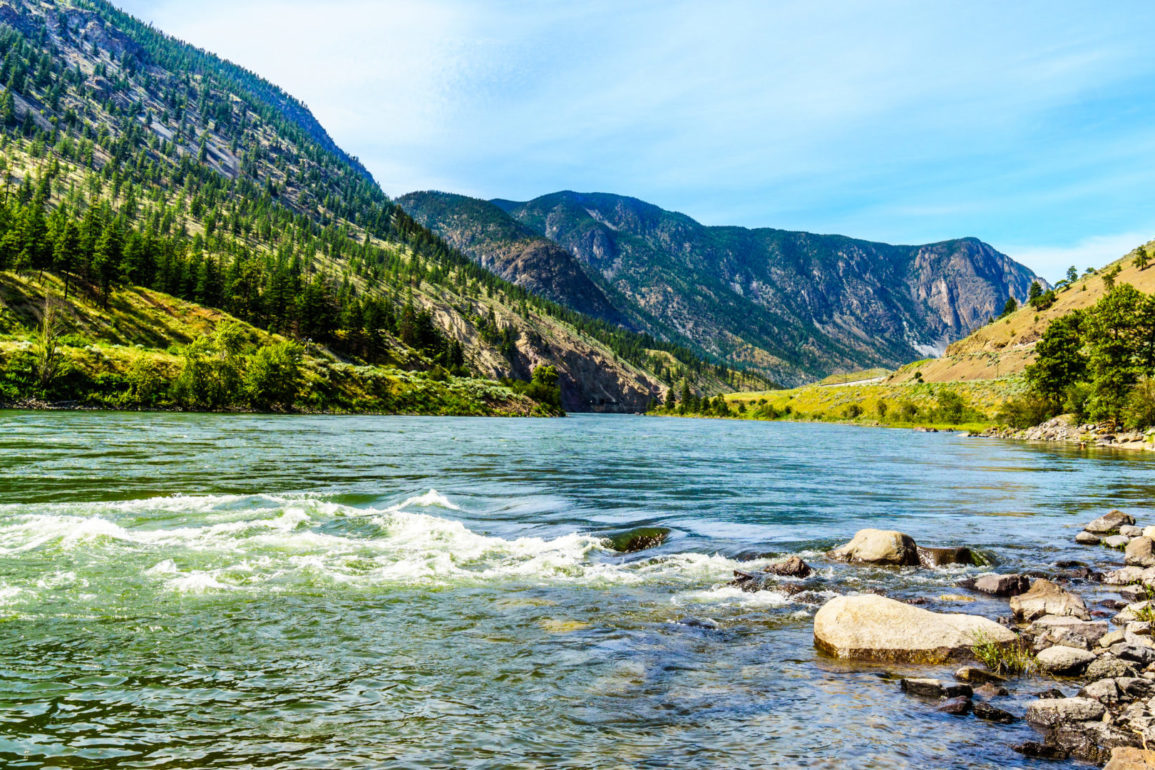 A Steelheader’s Paradise: Past & Future Unknown

The Plight Of Thompson River Steelhead – From Historic Highs To Present

Tucked in the arid landscape of British Columbia’s interior are the memoirs of a steelheader’s paradise and the relics of one of the most highly regarded sport fisheries in BC’s history. The Thompson River produces steelhead of unmatched calibre and the allure of this anadromous specimen, unrivaled in power and stamina, has drawn anglers from around the world.

From total returns in the thousands during the 1980s to spawning abundances estimated at 250 and 115 for the Thompson and Chilcotin, respectively, for the 2018 run, their devastating decline now rests on the edge of extinction. Downward trends that were overlooked in the ‘90s have slipped through the cracks of mismanagement and British Columbians risk the loss of an iconic population of steelhead that exemplifies the meaning of wild.

A trip up through the Fraser Canyon, past the confluence of the Thompson and Fraser rivers at Lytton and onwards to Spences Bridge will take an angler along the same route travelled by countless eager steelheaders of decades past. Decrepit concrete foundations and old, faded signs are just some of the indicators left of a flourishing past marked by healthy returns, shotgun openings and shoulder-to-shoulder anglers.

During the peak of the Thompson steelhead fishery, a number of small communities, including Spences Bridge, were bustling hubs providing food, accommodation and guiding services from September until the end of the year. Anglers would provide a steady source of income for these communities as they ate, slept and drank during their frequent pilgrimages to the famous body of water that flowed through these towns. The Thompson was far from a hidden wonderland, for it was not uncommon to see anglers posted on both sides of the river in a steady, patient, downstream line waiting for their chance to battle a giant.

Returns for both the Thompson and Chilcotin have seen numbers as high as 7,000 combined, and the Thompson River alone has recorded spawning abundances of 2,000 to 3,000 fish in the 1980s. With strong numbers of such a truly remarkable population of wild steelhead, it was no question as to why many made the journey to this special place.

The Thompson River still had a one wild fish per day harvest limit up until 1989 when it was included in the province-wide mandate for catch and release of wild steelhead. As steelhead numbers began to decline and complete fishing closures became more frequent, the anglers returning also began to depreciate. Now without even a gas station, communities much like Spences Bridge and the famous businesses that made up the heart of this renowned region are almost all lost. All that remains of the Sportsman Motel is a vacant lot and a rusted pole ironically still inviting guests to the restaurant with a weathered “open” sign. Much like the Sportsman, businesses that catered to the influx of anglers on opening day are almost all but a fleeting memory. Shaw Springs remains boarded up and the Quarter Circle J has shuffled hands, being renamed as the Baits Motel. The famous Log Cabin Pub, which rests at the centre of countless stories, still holds strong but its future remains uncertain. Without the steelhead and their anglers, the dependent economy of these precious highway towns begins to fail, and their identities begin to fade.

The previous 10 years have seen a stark increase in regulation changes and a drastic decrease in wild fish numbers. Both 2008 and 2010 saw total closures of the Thompson, with no fishing allowed in either season. As recently as 2013, it was predicted that roughly 850 spawners would return to the Thompson and an aggregate total with the Chilcotin watershed of 1,250 fish. These number still remained at the management threshold conducive of supporting an opening and numbers appeared to be improved from previous years; however, that trend would not hold.

Thompson steelhead are more than their incredible power and angler standard. With an exceptionally high reproductive potential and ability to moderate short-term environmental impacts, thompson steelhead are like no other steelhead on earth. But despite their natural-bred resilience, they are failing to recover.

In 2014, the regulations changed from “closed until open” to “open until closed” and in-season changes would depend on the estimated stock from the Albion Test Fishery in the Lower Fraser. The year 2014 also saw the implementation of a bait ban and hook size regulation hoping to reduce recreational impacts on steelhead. Was this all too little, too late? November of 2017 casts a dark shadow over the hearts of many, as estimates of the lowest spawning abundances in recorded history were predicted at 177 Thompson steelhead and 58 Chilcotin steelhead. Interior Fraser River steelhead have been labeled in a state of extreme conservation concern for the last number of years, resulting in increased pressure on the governing bodies by concerned groups.

In January of 2018, after pressures from various concerned conservation and angling organizations, the Committee on the Status of Endangered Wildlife in Canada (COSEWIC) performed a fast-tracked emergency threat assessment of Thompson and Chilcotin steelhead. By February 2018, COSEWIC assessed both populations as endangered and at imminent risk of extinction. An emergency listing under the federal Species at Risk Act was recommended to the Minster of Environment and Climate Change, the Honourable Catherine McKenna. At the writing of this article, both Thompson and Chilcotin steelhead remain under consideration for listing under the federal Species at Risk Act. It is now a waiting game in the indefinite future of interior Fraser River steelhead.

For many years, the battle cries rang true as anglers, biologists and conservationists tried to shed light on the numerous causes for Thompson steelhead stock decline. Although various reasonings have been highlighted in importance through time, it is the multiplication of these issues onto one another that have catastrophic effects on survival rates. Water drawn from spawning tributaries such as the Nicola and Bonaparte for agricultural use has reduced water levels and increased temperatures. Un- restricted access of cattle to important tributaries has also led to erosion of stream banks and destruction of aquatic habitat. Hooved animals treading in sensitive tributaries can lead to imbalances in the water’s chemical composition with excrement influx and may also increase turbidity or disturb spawning beds. The importance of agriculture to this area is undeniable; but improving practices to maintain the health of fish bearing streams has been a long-standing fight.

Perhaps the most publicized causation of decline is the interception of steelhead as by-catch during gill net fisheries in the Lower Fraser River during peak migration times. The Lower Fraser chum run was historically divided into two timings, occurring first in September and the bulk of the run returning in late November. The gap in October allowed steelhead to safely pass through the river, unmolested by heavy netting that occurred during the commercial chum fishery. The chum migration now peaks in October due to augmentation by hatcheries, starting in the mid 1980s, who were participating as part of the continuing Salmon Enhancement Program. Steelhead are now heavily impacted by these nets, and with such low returns every wild interior Fraser River steelhead counts. The Lower Fraser chum fishery is considered the largest single detriment to interior Fraser River steelhead at this time and diligent groups are working toward removing gill nets from the river.

Steelhead are unique compared to their salmon cousins, as they can have multiple life histories. Their unpredictability and variability between individual populations means steelhead are difficult to manage for and understand. Their time spent in saltwater environments can fluctuate depending on conditions, and ocean survival rates become their own unpredictable cause, especially when paired with predation. Their transcendence between salt and freshwater has also stuck steelhead in a difficult management position between the federal and provincial governments.

Thompson steelhead were one of the most abundant populations of summer run steelhead in southern BC and now they face the potential of total elimination. The Gold River on Vancouver Island, formerly the most prolific winter run population in BC, mirrors the demise of the Thompson. The Gold is shrouded in its own impacting factors; however, the result is all the same – river closures and concerned anglers left shaking their heads. These two systems single-handily represented the strength of BC’s steelhead and now both are fading through time. If these two systems, historically two of the strongest, are hurting, what else has been missed? The loss of these fish is becoming all too common in a province plagued by fisheries mismanagement and denial. The signs and causations are clear. Action by both governments needs to be taken now or these fish are gone forever.

Thompson steelhead are more than their incredible power and angler standard. With an exceptionally high reproductive potential and ability to moderate short-term environmental impacts, Thompson steelhead are like no other steelhead on Earth. But despite their natural-bred resilience, they are failing to recover. For steelheaders, the campaign to save Thompson steelhead is not about angling, it is about protecting and securing a future for a truly unique population of wild fish. Thompson River steelhead are British Columbia. Their strength, fitness and beauty are unparalleled, much like the place in which they call home. These fish are the life blood of a tight community, bound by the same passion that has allowed its members to fight and raise concern over the demise of these populations for years. Their wild nature is not a trait that can be replicated or hatched artificially. Steelheaders are willing to abandon their ability to pursue these special fish if it means giving them a chance at recovery. The Thompson River closed Oct. 1, 2018, and included in the new regulations produced this year will have standing, annual steelhead closures from October through until the end of May. All is not lost; if anglers continue to fight and continue to push, there may be hope. Much like the Thompson’s wild steelhead, our ability to endure is great and our destiny rests in those willing to fight upstream through seemingly impossible obstacles.