The Perdigon Minnow is another creative design from the vise of Dennis Gamboa. Dennis was looking to create a durable, adaptable fly for coastal cutthroat and returning coho salmon. With a quick facelift and perhaps a size upgrade, his Perdigon Minnow also suggests kokanee, mountain whitefish and sculpin for targeting larger bull trout and Dolly Varden. 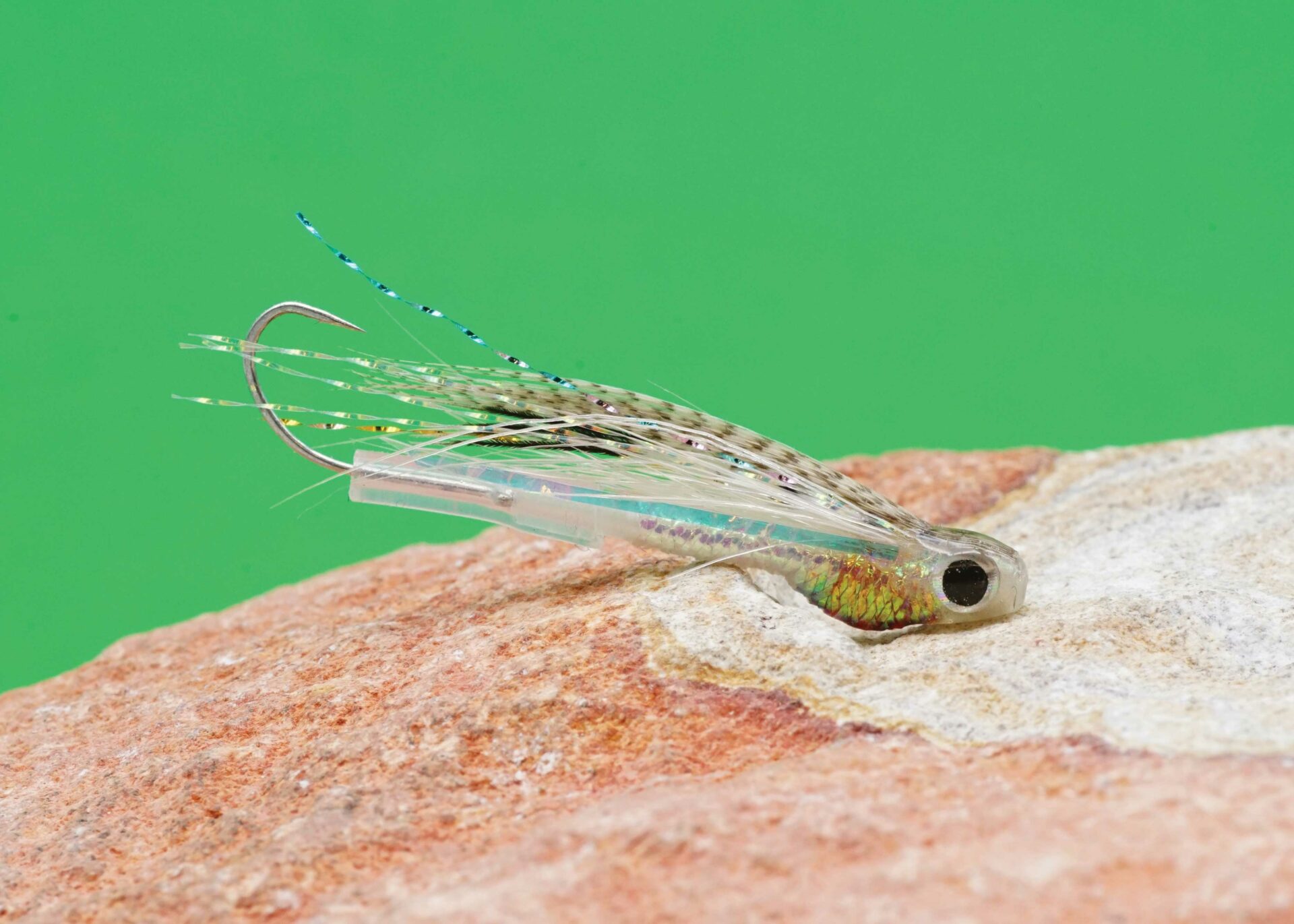 Rather than using a hook as the foundation for his minnow, Dennis opted for small diameter (1.8 millimetres or 1.4 millimetres) clear plastic tubes. Tubes provide a couple of primary benefits. As the tube slides up the leader, once you hook a fish, the fly is less likely to be chewed or damaged, resulting in longer-lasting flies. Hook size can also be varied to match specific target species size and fishing conditions.

When it comes to tying on tubes, you have several options. If you envision tying many tube flies, a specific tube vise would be a sound investment. You can also purchase separate tube fly adapters that fit into the jaws of a standard vise. Specific tube fly vises or adapters firmly hold the mandrels that tube flies are tied on. Mandrels come in various styles, so it is crucial to have the right-sized mandrel for the tubes you intend to tie on. For example, Dennis’s Perdigon Minnow requires a narrow diameter tube. If you rarely envision tying tube flies, a sewing or darning needle placed into the vise jaws can also serve as an impromptu mandrel. Depending on your vise, you may have to support the needle with your non-tying hand as they usually don’t hold tubes in place nearly as well as a tube vise or adapter.

Plastic and metal are the most common tube materials. Metal tubes provide weight and, depending on the specific type of metal, sink at a variety of rates. Dennis ties his Perdigon Minnow on a narrow diameter plastic tube.

To add weight, suggest the egg sac of an alevin or the belly of a minnow while helping to keel the fly so it swims correctly, Dennis ties in a curved tungsten shrimp body along the underside of the plastic tube. Euro nymph tyers often use tungsten shrimp bodies for Czech nymphs and scud patterns. You can also colour the shrimp body using a permanent marker, orange for an egg sac, black or olive for the belly of a larger minnow.

Before placing on the mandrel, singe one end of the plastic tube to form a small flange or collar. The collar provides a starting point for the fly, while forming a resin dam for the head and eyes. The flared end also makes it easier to thread the leader or tippet through the tube before tying on the hook.

Depending on personal preference and the presentation challenges, you can choose to use a rubber guide or junction tube to hold the hook in position on the tube. Once the hook is tied on, slide the guide down the leader to the hook eye. Push the hook eye into the tube to hold it in place, either point up or point down. Slide the tube fly onto the leader and push the guide onto the rear of the tube to marry hook to fly. When using guides or junction tubing, it is necessary to keep a section of the rear portion of the fly clear so the guide can easily slide onto the tube. When a fish strikes, the hook pulls free from the guide, allowing the fly to slide up the leader and out of harm’s way. You don’t have to use a junction tube or guide as, most times, the fly slides tight against the hook eye, especially when stripped or swung.

The Perdigon Minnow features a distinct set of eyes to imitate those of natural baitfish. Dennis coats his eyes by layering differing viscosity UV resin to form a neat, natural-looking head. You can also use a UV resin drop to cover and secure the eyes in place, followed by a single coating of two-ton epoxy to form the head.

When using the epoxy option, slide a toothpick into the tube and then use the other end of the toothpick to hold the fly in place on a drying wheel to ensure the epoxy sets and dries evenly without sagging.

The lateral line runs along the sides of any fish and is usually a distinct feature regardless of fish size. It is a feature worth imitating. Dennis uses Perdigon/Buzzer Quill, a material commonly used to form bodies on perdigon nymphs or chironomids, to suggest the lateral lines.

Dennis finds the stiff Perdigon/Buzzer Quill holds its shape in the water better than other materials, such as Flashabou, while helping to keep softer wing materials in place, especially when fishing his minnow in current.

The Perdigon Minnow has quickly become one of Dennis’s favourite flies when targeting coastal cutthroat and returning coho salmon. It has performed remarkably well in early morning, late evening, during tide changes and when prospecting in and around weed beds.

How To Tie Perdigon Minnow (Alevin)
Designed By Dennis Gamboa