Like most hunters, I own a variety of rifles in numerous different chamberings. The thought of being limited to just one is not something I’d ever consider; not because one couldn’t do the job, but because I really enjoy shooting different rifles. I’m the first guy in line to try a new model or a new chambering. It’s not that I buy into hype or anything like that, it’s just because I love tinkering. But not everyone can afford to own numerous rifles and there are those that just really enjoy becoming intimately familiar with one rifle and using it exclusively. And, I get that. The good news is, there are more rifles and chamberings these days that are more than capable of handling all of the species that call British Columbia home. Let’s take a look at what the perfect rifle for the one-gun hunter would look like. 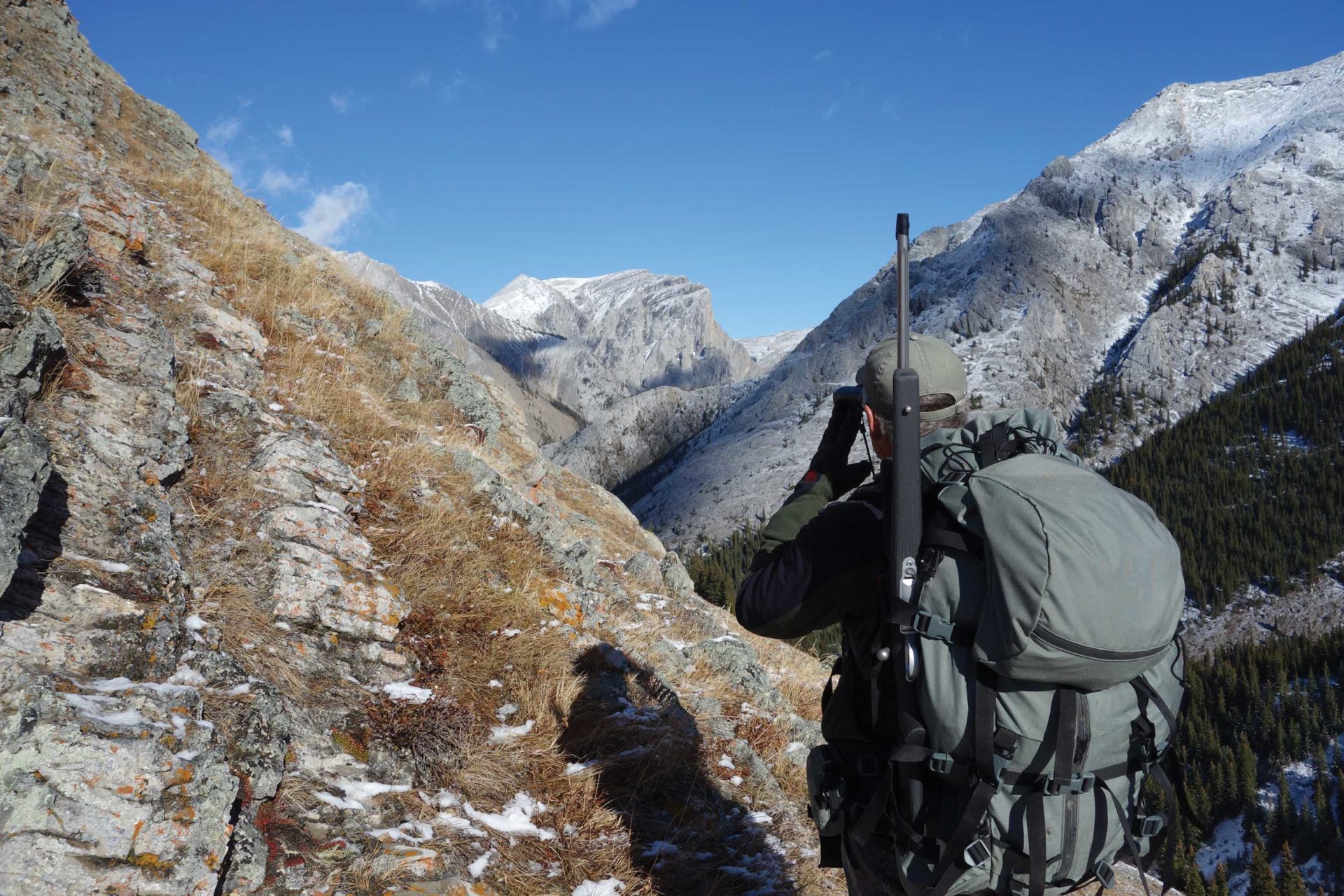 The Anatomy Of The Rifle

In my opinion, you can’t beat a bolt-action rifle for simplicity and unbeatable performance under all conditions. It’s the only action style I would consider for the one-gun hunter. Sure, there are some solid single shots out there, but for the one-gun hunter, having a second shot readily available is important, especially with predators like bears, but it’s also important if your first shot on an ungulate isn’t perfect. Pretty well all mainstream rifle manufacturers offer a wide variety of bolt-action models these days as well, so finding an affordable option isn’t a problem.

As this rifle would see duty in all types of terrain, something under six-and-a-half pounds would be ideal for sheep and goat hunts. A synthetic stock is a must, both for durability and for weight. While synthetic stocks on lower-cost rifles are typically just made from injection-molded plastic, and some people don’t like the hollow feel, the truth is they are extremely durable and aid greatly in keeping weight down. The feel is nothing more than aesthetics for the most part. Certainly, more expensive rifles sport nicer fiberglass and carbon-fibre stocks, and if it’s in the budget they are a great choice as well; but if they aren’t, don’t let the feel of the injection-moulded stocks dissuade you from buying them.

I personally would look for a rifle with a stainless-steel barrel and, if it’s an option, some sort of Cerakote or similar coating. Again, it all comes down to durability and the person with only one rifle is likely to expose it to the most severe conditions, from being stuffed in wet scabbards to knocked around in vehicles and boats. I’d definitely want a rifle that I didn’t need to baby and that didn’t require a lot of care and maintenance. A rifle with a synthetic stock and stainless barrel is about as low maintenance as you can get.

As some of the cartridge choices being considered are fairly heavy recoiling magnums, I’d also like a removeable muzzle brake. I’m not a big fan of them under actual hunting conditions as they are very loud, but when target shooting, they do greatly reduce recoil and ear protection is used. I find that I shoot lower-recoil rifles much better.

Through The Looking Glass

An all-round rifle would absolutely require a scope on it and my ideal choice would be a 3-18×50, but if long-range shooting is not a requirement, then something like a 3-12×44 would suffice. With the recent trend in rifle scopes with large magnification ranges, it’s easier than ever to carry a single rifle for all applications, from up close and personal, to ranges out to 1,000 yards or more. Obviously, the ideal scope would need some sort of ballistic reticle or exposed turret system to allow the shooter to hold directly on their target through a wide variety of ranges. While at one time the exclusive domain of high-end target scopes, ballistic reticles and turrets are now common even on lower-priced scopes. Most scopes are offered in minute of angle (MOA) and it can be a bit confusing having to count clicks on a turret or remember what yardage each hashmark represents, especially in a hunting situation where things often happen fast. A British Columbia company, Ballistix Targeting Systems, has recently made that much simpler, however, by offering a service that burns custom turrets for your scope for your exact load. These turrets have actual yardage burned on them rather than MOA clicks, so it’s just a matter of dialing to the correct yardage, so there is nothing to remember. If long-range shooting is a possibility, I wouldn’t consider a set up without these turrets.

The good thing about using only one rifle for all hunting versus having several different rifles, is that it allows you more budget to put toward one quality rifle scope versus several lower-quality ones. It’s often said that you should spend at least as much on a rifle scope as you do on a rifle, and if you look at mid-priced rifles that’s likely not bad advice. I’d say look at spending around $1,000 if you are looking at putting a decent rig together.

It seems that many outdoor writers are making careers out of comparing cartridges these days and naming the victor based on 20 feet per second of muzzle velocity difference or three extra pounds of energy. My mom used to call that picking fly crap out of pepper with boxing gloves on. The truth is, most centrefire cartridges are adequate big game cartridges in the right hands and with the right bullet, and I’m not here to pick fly crap out but there are a few stand outs in the all-round category. If we are considering game from blacktail to bison size, at ranges from, say, zero to 500 yards, it definitely limits the contenders. Let’s look at a few of the more common cartridges that fit the bill.

My top three chamberings are not only based on their ability to ethically harvest the vast array of animals BC calls home, but also to do it at ranges from zero to 500 yards. For me, this means delivering a bullet with an impact velocity in excess of 2,000 feet per second all the way out to 500 yards. This would permit the use of all bullet types, including mono metals which do require higher impact velocities to expand reliably. My choices also include cartridges with readily available, quality factory ammunition, as many hunters are not handloaders and factory ammunition is getting so good that the advantages of handloading are shrinking.

Without question, the 300 Winchester Magnum would be in my top three choices. This versatile 30-calibre cartridge utilizes a wide array of bullet weights and is definitely a very capable long-range cartridge. Shooting a 180-grain Hornady GMX, for example, you still have an impact velocity of 2,067 feet per second at 500 yards. You could add the 300 Winchester Short Magnum and 300 H&H into this category as well, as they are all virtual ballistic clones, but factory ammunition is not as readily available.

The 338 Winchester Magnum is another of my favourites that may surprise some. With 185-grain bullets, it’s a real pleasure to shoot and you can go all the way up to 250-grain bullets for the bigger stuff. I’ve traveled the world with this cartridge and have shot everything from 50-pound reedbuck to 2,000-pound eland with it and have never been disappointed. It too is a very good long-range choice and several companies are now offering dedicated long-range bullets for this calibre.

The third of the cartridges in my top three, in no particular order, would be the 7mm Remington Magnum. At one time I wasn’t a huge fan of this cartridge, but with recent advents in 7mm bullets, it’s really come out of its shell. Of my top three, it’s the undisputed king for long range and, with the heavier and better constructed bullets available now, it’s a real contender for bison and grizzly when the season reopens. With the right rifle in the right hands, the 7RM is more than capable out to 1,000-plus yards, but with mono metal bullets like the GMX, it provides great penetration, even up close on moose and bison-sized game. For a dedicated bison or grizzly rifle, I’d pick one of the aforementioned, but I wouldn’t feel under gunned with the 7RM either.

While we could certainly argue cartridge selection forever, within my parameters those are the ones I’d chose. Take long range out of the equation and it opens the door to the 30-06 308 and a host of others. But the real story here is that a hunter could perceivably hunt all big game very effectively in British Columbia and it could be done without breaking the bank, and all with a factory rifle and ammunition. I doubt you’ll ever see the day where’s there’s only one rifle in my safe, but it’s comforting to know that if it were ever the case, it wouldn’t affect my hunting ability at all.