The Benefit of Gun Pairs

You will never be able to load your gun, check the safety and close the bolt, all while focusing on game, unless you practice. A lot. And because magnum hunting rifles or precision long-range rounds are punishing both financially and recoil-wise, it makes sense to practice with a firearm paired to your long-range, precision big game rifle in a lighter calibre or rimfire. Matched gun pairs make sense for handguns too. Rimfire rounds are an easier introduction to new shooters than full house centrefire loads, and they put less pressure on the pocketbook too. 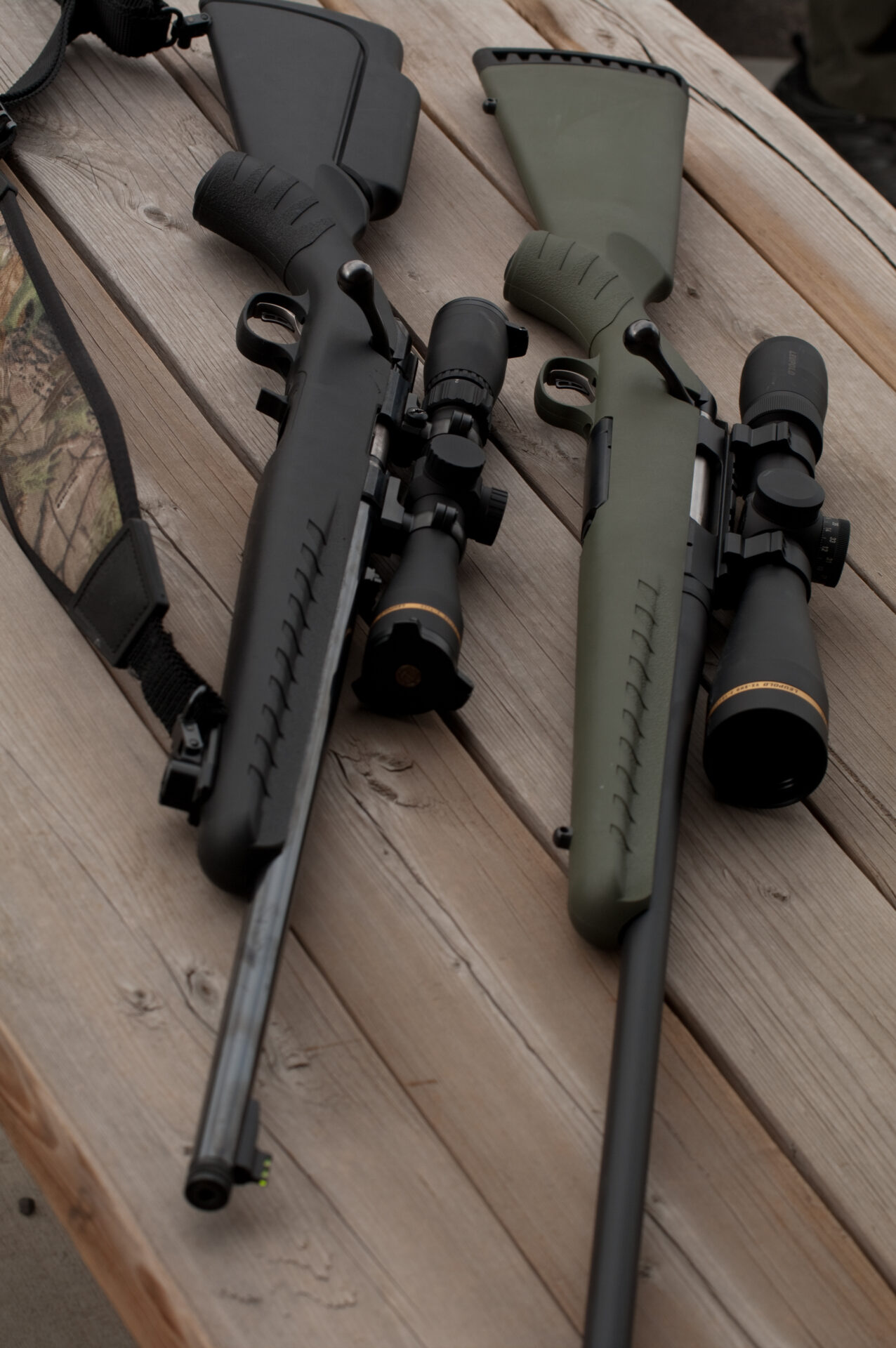 The year I bought my first gun, I bought three – all pumps. The concept I followed was to have all three guns in similar formats. I wanted to train with my 22 Long Rifle pump-action for shooting my pump rifle in 270 Winchester when deer and bear season came around. Working the pump-action became automatic, even though the stroke was longer on the big game rifle. The process of loading the cartridge, slamming the bolt home, pushing off the safety, letting the shot go and cycling the action to take up a new round was the same on the rimfire, centrefire and shotgun. The training on the rimfire paid off.

The following winter when I bought my first bolt-action centrefire in 300 Remington Ultra Mag for moose and elk, I paired this one with a 223 Remington and had the triggers tuned to two-and-a-half pounds. The scopes were similar. Once I sighted in the 300, I switched to the 223 and shot hundreds of rounds that summer. When big game season came around again, my success was directly attributed to the practice I had on a similar-format gun. Loading the magazine, cycling the bolt, acquiring the target, moving from safe to fire and letting the shot go were almost identical steps on both guns. The guns were the same model, and the 223 Remington behaves similarly ballistically to the 300, at least out to 300 yards.

This past year, many manufactures have released new rimfires that match almost identically their big game and precision centrefire offerings. My Remington Custom Shop 547 rimfire is the same size, trigger pull weight and length of pull as my moose rifle, which saves me sending multiple flinch-inducing 300 RUM rounds downrange. The rimfire is easy on the twitch and the wallet.

Terry Korth, at Korth Industries, lent me his pair of PROOF Research rifles in 300 PRC and 6.5 Creedmore to shoot at Korth’s indoor range. If you want to be humbled, shoot a $13,500 gun combined with a top-end Leupold optic proven to shoot better than half-minute of angle while a fellow expert shooter looks on. The day at the range proved my point perfectly. I could shoot the 6.5 Creedmoor reasonably well all day long. It offers up less recoil than a 308 Winchester. Move to the 300 PRC and, 10 rounds in, my groups are opening. I stopped before I seriously embarrassed myself. You can shoot the 300 PRC accurately – just practice on something with less recoil. My lesson learned for the range day; clearly, I need to shoot more.

While PROOF Research rifles are at the top tier and worth the pursuit, Ruger makes a range of budget-friendly rifles easily paired. Both the Ruger Precision Rifle and the Ruger American Rifle are available in rimfire versions and lighter-recoiling centrefire options to pair with a heavier centrefire round.

Ruger makes perfect pairs of single-action revolvers too, with the Single Six paired up with a 357 Magnum or a 45 Colt for shooters wanting to shoot a traditional wheel gun. The same concept applies equally well to semi-auto pistols. Many pistol manufacturers offer rimfire conversion kits or rimfire versions of the same centrefire pistols, giving shooters access to rimfire shooting on their favourite platform.

Trigger time is cumulative; so is recoil. Shooting improves with practice, but so does the risk of becoming recoil sensitive. For me, when shooting my 300 Remington Ultra Mag off the bench, I am good for five rounds and then I want to move on to something else with less recoil. If I can’t get a good group in the first five shots, I need to try another day because my accuracy just drops off – I am anticipating the recoil. For me, the 300 is a recoil beast. Chuck Hawks recoil table estimates recoil of the 300 RUM at 32.8 foot-pounds with a 180-grain bullet, the 223 Remington measures 2.6 foot-pounds with a 45-grain bullet, and the 17 HMR is 0.2 foot-pounds with a 17-grainer. The reason I can shoot my 300 well come game time is I shoot hundreds of 22 Long Rifle, 17 HMR, 17 Fireball and 223 Remington rounds every year. Hundreds. All on platforms similar (or nearly identical) to my magnum. Whatever control and expertise you develop with light-recoiling rounds improves your accuracy, whether you’re shooting steel gongs, precision series targets or just committing to making the most of your big game tags.

Rimfires are a great place for new shooters to start. Whether range introductions happen with a long gun or a handgun, rimfires are a great round to start with. Brand new shooters do much better with a firearm introduction at the light end of the recoil scale, so rimfire is the right choice no matter what platform. Even a 9mm Luger or a 308 Winchester seems to pack a wallop up for the uninitiated. Single-action rimfire revolvers are a great way to introduce shooters to get comfortable with firearm function, loading and unloading, sight alignment, target acquisition and letting the shot go. Light-recoiling guns are an easy on-ramp to the shooting sports. New shooters always respond with an exuberant yes when I ask if they want to move up in class to a 9 mm Luger or 45 ACP, 45 Colt 44 Magnum. The same exuberance comes when the offer to move up in rifle calibre from 22 Long Rifle to 223 Remington, to 308 Winchester and onto 300 Winchester Magnum – but those rounds are not the ones to start with. Introduction to semi-automatic pistols and single and double-action revolvers always do better with rimfire options.

A well-constructed gun with a properly sized chamber, aligned perfectly with the barrel and topped with a decent optic, will shoot straight. It’s up to the operator to let the shot go at the split instant the crosshair is on target. A quality trigger is one of the best improvements a shooter can add to a firearm. The better the trigger, the easier it is to be accurate with shot placement. And while we are pairing up guns, it makes sense to use optics that are similar or, if possible, perfectly paired. Everything shooters can do to make their pair of rifles more similar will help the outcome, whether measured in points on paper, points on a rack or meat in the freezer. All that is left now is to shoot. And shoot some more.

A Pair of Triggers

“We believe the trigger is the most important component in any firearm and that you should love and trust your trigger.” TriggerTech.

TriggerTech has recently become the darling of aftermarket and original equipment triggers. And they are Canadian! Several top-tier rifle manufacturers around the globe have picked up TriggerTech to be included in their stock guns. You will find TriggerTech triggers in firearms made by PROOF Research, Bergara, McMillan, Christensen Arms and many others. It makes sense to match triggers in matched guns. Originally, I had all my triggers in my hunting and target rifles tuned to break at two-and-a-half pounds. Now I am in the process of installing TriggerTech triggers in my paired Model 700s. Trigger creep is the enemy of accuracy and TriggerTech’s unique design eliminates creep to deliver a crisp break with no after travel. TriggerTech is the result of smart Canadians tackling a creepy problem. The folks at TriggerTech want to help you improve your shooting by matching your triggers with a discount code good until June 2021. In case you didn’t get the trigger of your dreams for Christmas, TriggerTech has provided a link and discount code for readers to order one. (I already got mine.) https://triggertech.ca, code: “TriggerTech10” January to June 2021.

A Pair of Scopes