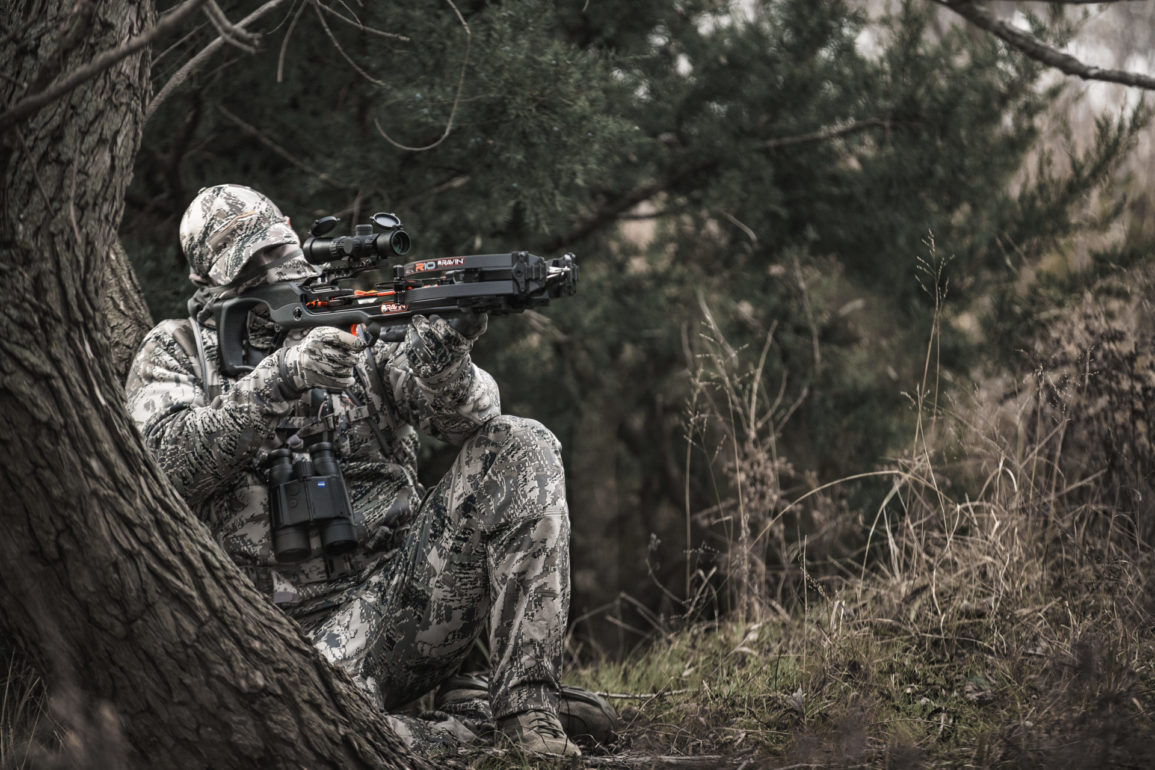 As a diehard hunter and outdoor writer, I’m always on the lookout for any new product that captures my imagination. A full-page advertisement in a National Shooting Sports Federation magazine depicting a crossbow that headlined, “Meet your next rifle” did just that. But the first line of that advertisement, which read as follows, “Experience three-inch groups at 100 yards from a crossbow that measures just six inches from axle to axle,” sealed the deal. This was a must-review bow. And, as good fortune would have it, my timing was spot on as Ravin had just released their newest crossbow, the R20 Sniper, that would still shoot like a rifle but with velocities of 430 feet per second. Furthermore, it was available as an all-inclusive package, which included everything but the broadhead and game of your choice. All said, however, the question still remained: would this bow actually deliver the outstanding performance advertised, potentially elevating it to the status of the World’s Best Crossbow, or would it fall short of my expectations? There was no question that I was going to find out.

While this bow is quite literally designed around new and innovative features, the unquestionable starting point has to be its revolutionary engine, the Helicoil. It incorporates several industry-changing advantages that work in consort to deliver what Ravin claims to be the most accurate crossbow ever designed. The Helicoil technology coils the cables away from both the top and bottom of the cams in helicoil grooves, keeping the cams perfectly balanced, which allows the cams to rotate a remarkable 340 degrees. It not only provides increased speed and down-range accuracy, but also creates, and I quote, “The most compact, efficient and accurate crossbow ever.” The cams also remain perfectly level when drawing or shooting the bow, which allows the arrow to free float above the rail, thereby eliminating the friction of a rail-designed bow and further enhancing velocity and accuracy.

The next impressive feature is the bow’s Versa-Draw Cocking System. And here I’m going to offer my opinion that it is the most innovative and user-friendly cocking system I have used. No add-on clumsy cranking system here. Working with the Trac-Trigger Firing System, which I will discuss next, this ultra-compact, fully integrated cocking mechanism is built right into the stock. But that is just half the equation, as it only takes 10 to 12 pounds cocking force to cock the bow. Meaning that just about anyone can cock this bow. Now, while that is impressive, it is also ambidextrous and offers the unique advantage of being able to un-cock the bow just as easily as cock it.

The Trac-Trigger Firing System is yet another one-of-a-kind Ravin design, at least within my purview it is. This patented, built-in trigger mechanism slides forward on a rail and captures the centre of the string each and every time you draw the bow. This provides straight-in- line nock travel, creating a balanced draw for unmatched downrange accuracy. The concept also provides the distinct and unique Frictionless Flight System that allows the string and arrow to float above the rail, eliminating any friction for consistent accuracy and longer string and cable life. The Trac-Trigger Firing System also features a safety on both sides of the bow so that it is easily visible and accessible whether you are shooting right or left handed. The only other innovation of note is that the cocking handle secures to the crank by a magnet, securing it when in use, but is easily removed once the bow is cocked.

Putting It Together & Field Test

While the bow arrived mostly assembled, some aspects of assembly were left to me, including mounting the jack plate and scope. Here I would highly recommend that you follow the instructions to the letter, not only with regard to assembly, but also in loading and shooting the bow. Don’t rush it, despite how anxious you are to use the bow; take your time on both assembly and on learning the details of operation.

The bow package included a very unique and new-to-me accessory, the jack plate. In its simplest terms, it is a type of rail on which you mount the scope, but it is designed to be adjustable for elevation. So, once the scope is synched to the jack plate, all that is required is to adjust the elevation dial on the plate to your target distance and it will hit spot on at that distance. No longer will you have to deal with 10-yard increment variances in a scope’s reticle holds. If your target is 57 yards, dial it to that number and, if your hold is accurate, it will deliver the arrow precisely to that distance. This is one user-friendly system that really impressed me. A Vortex Strike Eagle 1-8×20 illuminated scope also came as part of the package. For more information on this scope, please see my article on the Marlin 1895SBL in the March/April issue.

The general fit and balance of this bow was ultra-compact, which, when combined with its narrow axle-to-axle width, would be ideal in tight spots such as tree stands. The total package, which included the bow with all its various accessories, weighed in just a fraction over nine pounds. A bit heavier than expected, but still very portable. I only encountered one minor issue and that related to its 13-inch length of pull, which was a bit short for my large wing span but something most hunters would not have to give a second thought to. I was also impressed on discovering that the safety automatically went to safe when cocking the bow, where it remained until I moved it to the fire position prior to a shot. No more second guessing as to whether I had remembered to engage the safety or not. It also proved to be very easy to visually check even when the bow was shouldered. These are both excellent additions to the safe handling and shooting of this bow.

Once I had the bow assembled, I decided to start by zeroing and chronographing the bow at 10 yards. Here I would like to offer a couple of comments on loading the bow. The internal crank and Trac-Trigger System for loading this bow were nothing short of awesome. Extremely user friendly, with my only word of caution being that when you are connecting the arrow nock to bow string that it is essential that you hear the audible click as it seats properly. I then chronographed three shots, which provided little deviation between shots of 427, 425 and 427 feet per second. Superb consistency, and the first noted step towards accuracy.

It took a few shots at 10 yards to zero the bow, but once I had this aspect behind me, I moved my target block out to 20 yards and with the jack plate set at this distance I once again zeroed the scope in order to sync it with the jack plate. I also noted at that distance how fully the arrows penetrated my target block, with seven to eight inches protruding out of the far side. I now moved my block out to 40 yards and, without any adjustment to the scope’s elevation turret, I moved the jack plate setting to that distance for a number of dead-centre hits. I then reasoned that I needed to ascertain if a broadhead-tipped arrow at 45 yards would hold as true for a broadhead as it had for these field points. I need not have worried, as it only missed the epicentre of the bull by a pittance.

Next, I became a bit creative in order to determine just how precise the jack plate was and how much elevation discrepancy there would be in a five-yard distance variance. So, I set my block out at 55 yards with the jack plate elevated to 60 yards and fired two arrows. First, the group measured a mere half-inch but, as expected, both were a bit high. The first arrow was one-and-three-quarter inches above the centre of the bull, whereas the second was just a tad higher at two-and-a-quarter inches. Averaging it out, we are talking about two inches of elevation variation with just a five-yard discrepancy in distance. While this would not have made any difference in a kill zone shot, it certainly points to how vital accurate target distance can be when shooting at a bit longer range.

Last, I waited two weeks to put this bow through what I would consider its ultimate test. Three shots at 70 yards with a right-to-left varying 15-kilometre crosswind – the maximum distance I would consider shooting at game in that kind of crosswind. This bow blew my socks off. The three shots grouped into one-and-one-eighths inches just a bit left of centre. In fact, two of the arrows were touching, undoubtedly vying for the same point of impact, and all three penetrated the back side of the block by six inches. This is simply outstanding performance, leaving no doubt in my mind that I would have no hesitation in shooting game at this range with this bow. This is rifle-like accuracy and, while it might not nudge a target rifle off its pedestal, it certainly exceeded my expectations.

While everyone has their own perception as to what may constitute the world’s best, when I take a look at all the innovative features that this bow has to offer and the level of performance it delivers, it is, if not the world’s best, it is, in my opinion, one of the best. Certainly, the best I have ever tested or shot.