Not all choke tubes are created equal

So satisfying! Crumpling birds and dusting clays always brings a smile to my face. The recipe for success starts with a dense shot pattern, one that delivers enough pellets on target to kill cleanly and effectively. Many of today’s shotguns include three to five interchangeable choke tubes, which provide a good starting point for testing choke and load combinations. However, as we’ll discover, not all choke tubes are created equal. Shotgunners who seek better ballistics from modern, high-performance shotshells often turn to aftermarket choke tubes for improved patterns and deadly downrange results. 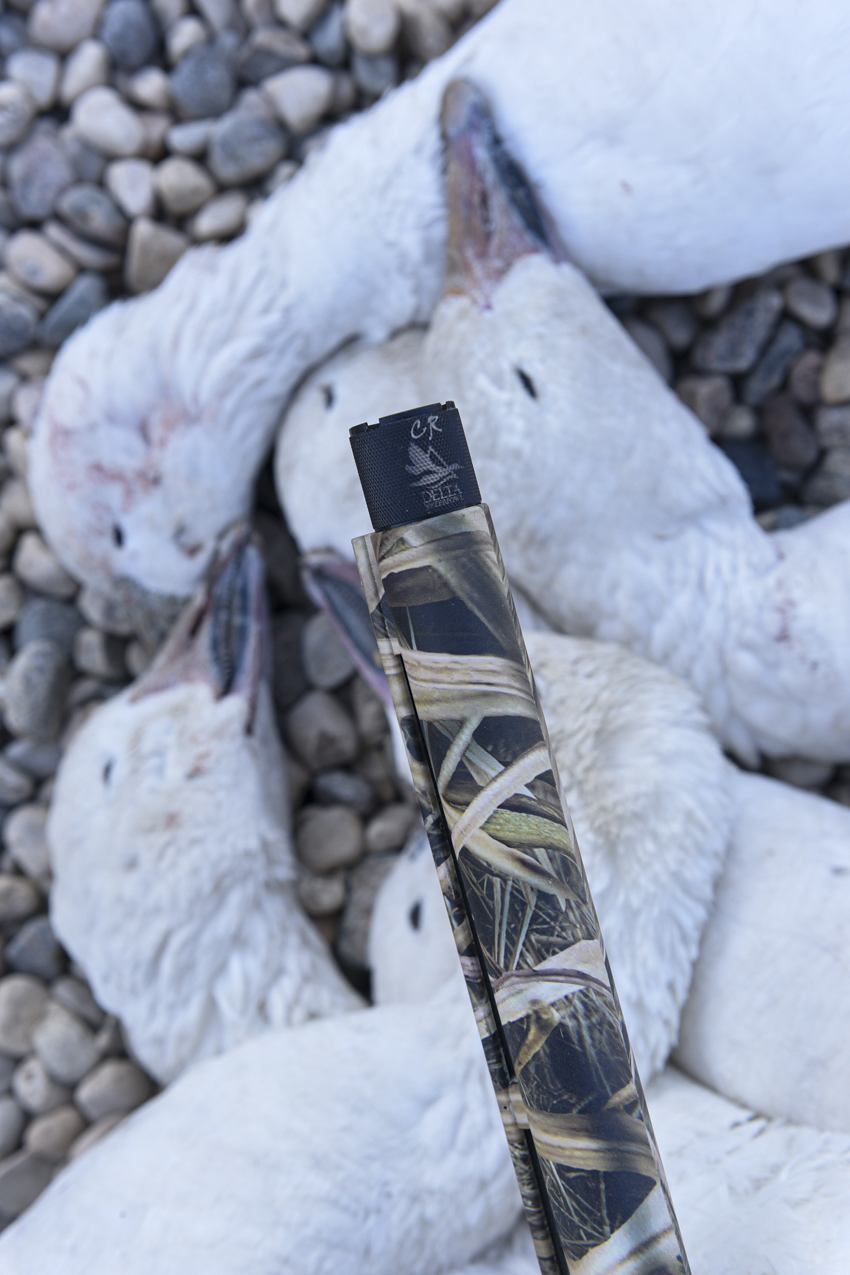 Today we’ll explore aftermarket chokes and why or when to consider a performance upgrade. We’ll also learn how to pattern a shotgun, which is important for every serious shotgun shooter no matter what choke they use. And we’ll examine the potential gains from these aftermarket chokes to help you decide if a premium choke is right for you.

Several factors affect the shotgun ballistics; gauge, shot size, load, velocity and choke all play their part in how the shot cloud hits the target. Change one of these variables, and the terminal effects change too. Even minor differences between shotshells and the random nature of shot in flight mean that, like a fingerprint, no two patterns are identical.

Finding an optimum pattern for a shotgun means testing different ammunition and choke combinations. Start with a factory choke tube and a selection of hunting or target-grade ammunition—next, test to see which ammunition produces the nicest pattern. The results may surprise you. If a shotgun’s factory choke throws poor patterns (full of gaps) with all types of ammunition, maybe it’s time to consider an aftermarket choke tube. Aftermarket chokes have several benefits which not only improve performance but also more enjoyable to use.

From a layperson’s perspective, factory chokes look identical to their aftermarket counterparts. After all, they’re just steel tubes, right? Well, like factory tires that come on a new vehicle, they are adequate. But they may not be optimum for your intended use, so an upgrade for better performance might be in order.

To learn what sets apart chokes from companies that specialize in optimizing shotgun patterns, I asked Alan Mills, the Canadian distributor for Carlson’s Choke Tubes, to explain. “Aftermarket chokes are typically made from heat-treated 17-4 stainless steel. Carlson’s Choke Tubes are CNC milled from solid bars for exceptional fit and finish,” he said. “Steel and tungsten shot is hard on choke tubes and can damage the relatively soft steel used in factory chokes. Our hardened steel chokes stand up to this non-toxic shot and are backed by a lifetime warranty should anything go wrong.”

Choke tube makers build thousands of different chokes, to fit most any shotgun model and in a range of constrictions. Some are designed for a specific ammunition brand’s loads, such as Federal’s Black Cloud or Winchester’s Blind Side. Others work with a wider range of ammunition for waterfowl, turkey or predator hunting.

Mills noted, “Many aftermarket chokes extend past the end of the barrel. These lengthened chokes serve several functions. The extension makes changing chokes a toolless operation, and more importantly, the longer chokes have a more gradual transition from the shotgun bore to the final constriction, a design that reduces pellet deformation, for fewer flyers and denser patterns. These chokes also protect the muzzle from damage.”

Extended chokes are also available in ported versions. Ported chokes vent gas in all directions, reducing recoil and muzzle climb. But take note, there’s no such thing as a free lunch. Ported chokes are louder for your neighbouring hunting buddies and dogs in the blind. The cost may outweigh the benefits in some circumstances.

Another advantage of aftermarket tubes is their fit and finish. A rough factory choke, especially those found on entry-level shotguns, collects plastic wad material. After a few shots, the plastic buildup can degrade patterns until it’s removed. Smooth, elongated aftermarket tubes ease or eliminate this problem.

It’s also important when selecting an aftermarket choke to consider shot size, shot type and velocity limitations. Before making your purchase, ensure the choke will work with your favourite ammunition, advises Mills.

Aftermarket choke tube companies have state-of-the-art testing facilities. Electronically measuring a patterns’ density provides hard data for tweaking chokes for optimum performance. Shooters have some assurance that a load and choke will work well together. However, because every shotgun is different, these companies recommend patterning your specific shotgun at your home range.

Rifle shooters know the importance of zeroing their rifles before heading into the field. Shotguns are no different. Different loads (shot size, shot type, payload) all produce different patterns, even from the same brand and type of shotshell. Only by patterning a shotgun can the shooter find the best combination for the task at hand. Patterning provides statistical results that are useful for comparing loads and chokes.

Patterning only requires a few basic supplies, including target paper, permanent marker, a tape measure and a safe place to shoot out to at least 40 yards. I use the ends of newspaper printing press rolls. If you have a printing press (newspaper) in your area, ask! For a few bucks, you’ll secure a lifetime supply of patterning paper.

The standard (basic) method of patterning a shotgun is to shoot at a large piece of paper from 40 yards, count the number of pellets within a 30-inch circle, and then divide by the number of pellets counted in an identical shotshell to get a percentage. Repeat three times for an average. As a rule of thumb, a full choke should put 70 per cent or more pellets in the circle at 40 yards. As the choke opens up (less constriction), that percentage decreases; a modified should produce 60 per cent, an improved cylinder 50 per cent, and a cylinder bore about 40 per cent. To look at this another way, to produce effective kills, a choke should produce a 70 per cent pattern at the optimum distance to the target. A cylinder bore is best at 15 yards, versus 35 yards for a modified choke. Again, changing ammunition will change the patterns.

Point of impact is the percentage of pellets above the point of aim versus the percentage of pellets below. In a hunting shotgun, there are two main types of patterns – a 50/50 pattern is the most common, where half the pellets hit below the point of impact, and half hit above. This is an instinctive way to shoot. The hunter covers the target to kill it. The 60/40 pattern has 60 per cent of its pattern above the barrel and 40 per cent below. The benefit of this pattern is that it allows the shooter to see most of the bird above the barrel. This pattern is more common in sporting shotguns than hunting shotguns. POI changes with a taller barrel rib and with differing comb positions.

The patterning paper only provides a two-dimensional picture of the three-dimensional shot cloud. So, the final step in the process is field testing. I recently acquired a ShotKam camera for hunting. It records a few seconds of video before and after a recoil impulse. In many of the videos, the shot string is visible, and the terminal results obvious. It’s a powerful tool that’s made me a better shooter, and as a bonus, I capture some long-lasting hunting memories.

Today’s shotshell manufacturers engineer their premium loads for long-range performance. Sometimes this advanced technology works best in a more open choke. It allows the wad to work how it was designed. In a tighter constriction, the wad and choke may work against each other and hinder patterns rather than improve them. Another option is using a choke specifically designed and tested with a specific brand and type of ammunition.

When To Choose An Aftermarket Choke

So, do you need an aftermarket choke tube? Light loads, open constrictions, low velocity, small shot size, and economy loads benefit least from premium tubes. On the other hand, heavy payloads, larger shot sizes, higher velocities and longer-range applications may benefit significantly from an aftermarket choke. And while many shotguns can benefit from a high-quality aftermarket choke tube, budget-priced firearms gain the most performance. Standard shotgun chokes are usually limited to an improved cylinder, modified and full. On the other hand, the sky is the limit when it comes to aftermarket choke selection. Don’t be afraid to call the companies if you have questions or need advice picking the right choke – they are more than happy to help. After that, enjoy your time patterning the choke and ammunition combinations to find the optimum pairing.

Aftermarket choke tubes add versatility to the shotgun. By changing chokes, we can use one shotgun for every kind of hunting and sport shooting. If you’re like me and enjoy hard hits on fast-moving targets, check out the premium choke options for your favourite scattergun. Using science and some testing to find the perfect match, you too can dust clays, tumble bunnies and drop birds with ease.