Threaded muzzles and what to do with them

The last few firearms I’ve purchased all have one thing in common: they came with threaded muzzles. And while the list includes rifles, shotguns and handguns, most of them were hunting-style firearms. While threaded muzzles have long been a feature of tactical-style rifles, they are now mainstream in the hunting and sporting world. Deer rifles, kid’s rimfires and hunting shotguns are all now available with threads cut into either the interior or the exterior of the gun’s muzzle. And in many cases these threads are a standard feature, in that you can’t buy that model with an unthreaded muzzle.

The purpose of these threads is varied and specific to the gun they appear on, but often they can accept accessories which serve multiple purposes. In any case, it’s a trend every gun owner needs to examine to see if there’s anything useful in it for them.

The muzzle of a gun is an active place, where a lot of noisy, violent and exciting things happen. That fact makes the muzzle a prime spot for firearm and accessory designers to ply their trade. As a result, today’s shooters have available to them a tremendous variety of devices which attach to the muzzle and perform all sorts of functions. The following is a breakdown of the most common reasons for attaching an accessory to your gun’s muzzle. 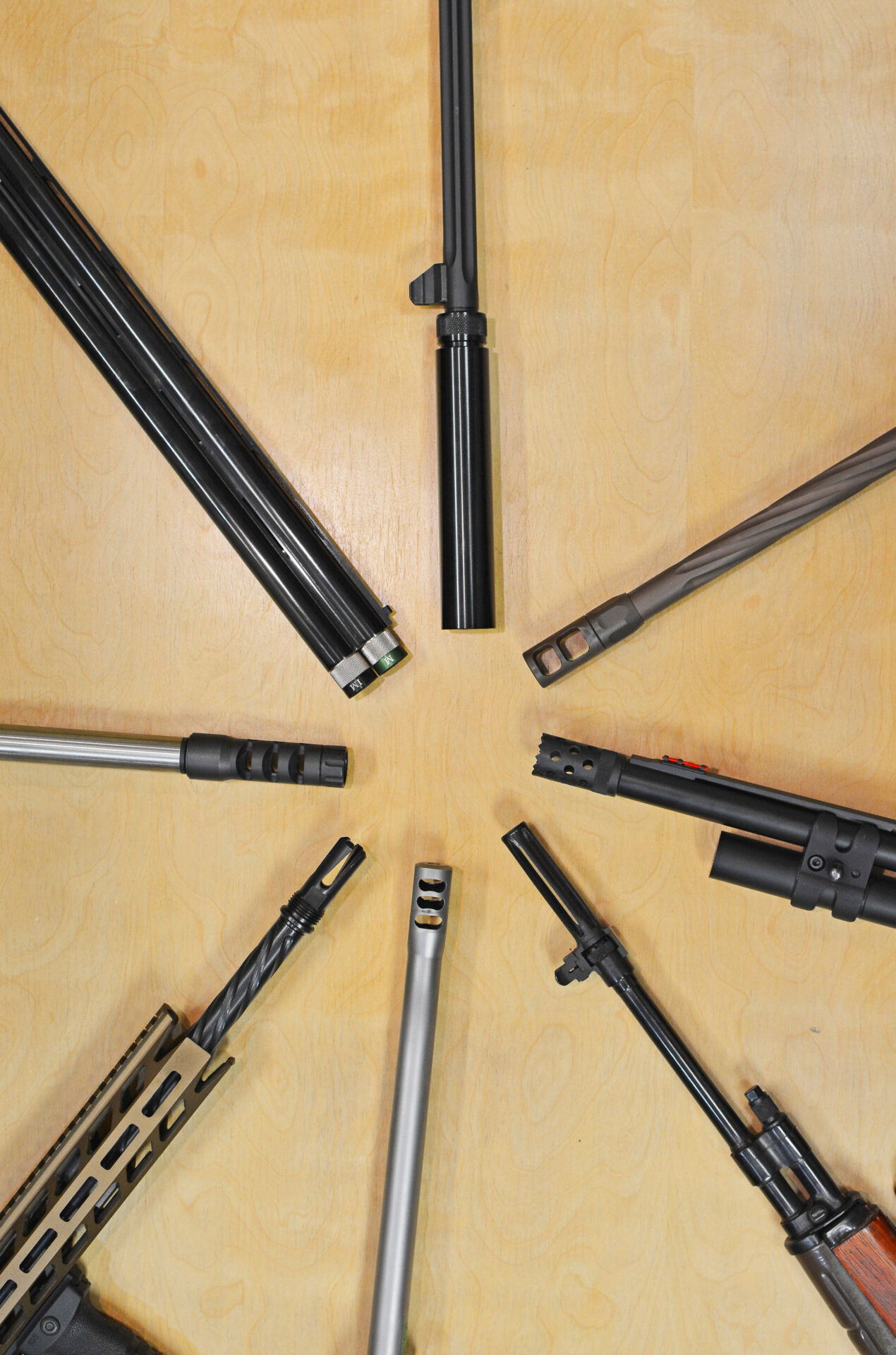 A popular purpose for a modern muzzle device is recoil reduction, and most of them work well in this capacity. If such a device is mounted on a rifle, it’s called a muzzle brake. If it’s on a handgun, the correct term is compensator. Either term is used when it comes to shotguns. And no, I have no idea why the terminology is different.

However, they all work on the same principle, the redirection of high-velocity muzzle gases, as well as the push these gases provide against an internal wall of the device. All such devices work best when gas pressures are high, as in centrefire rifles. The much lower pressures at which shotguns operate means recoil reduction by this method is significantly reduced. And although they are available for rimfire rifles, the minimal gases produced by rimfire ammunition means such devices are just decoration.

A key disadvantage of any device which redirects muzzle gases is that it can increase the noise level experienced by shooters and bystanders. I’ve found some designs seem to be modestly better at reducing this effect than others, but I’ve never seen a legitimate sound measuring test on the topic, so I could just be fooling myself.

It’s worth noting here that the slim profile muzzle brakes, usually found on centrefire hunting rifles and direct gas in all directions, also direct gas downwards. Called radial brakes, they can be a problem when shooting prone as the downward-directed gases can fill the air with large amounts of dust and debris. Gill brakes, which direct gases to the sides and sometimes the top, help reduce this problem.

The reduction of muzzle rise, or muzzle flip, is another common reason for attaching a muzzle device, and it can be accomplished in tandem with recoil reduction by the strategic placement of exhaust ports. This is commonly seen on handguns used for competitive shooting, where fast, accurate follow-up shots are a necessity to score well. However, some rifle brake designs with horizontal ports will have one or more top ports designed to keep the muzzle down when a shot is fired.

When shooting relatively lighter weight bullets in a high-pressure cartridge, these top ports can be so effective they don’t just reduce muzzle flip, but actually push the muzzle below the line-of-aim when the shot is fired. Ideally, of course, a properly tuned brake will hold a muzzle at the point-of-aim so the shooter can see the bullet impact and make any necessary corrections to a fast follow-up shot. Finding that sweet spot is almost more luck than good management because of numerous variables, including gas volume, the rifle’s centre of gravity and how the shooter holds the gun.

A lesser-seen purpose of muzzle devices is the tuning of barrel harmonics. It’s well known that small adjustments to the length and/or weight characteristics at a rifle’s muzzle can affect barrel harmonics and therefore accuracy. Handloaders are effectively adjusting these barrel harmonics when making minor powder charge adjustments or bullet seating depth changes. Called barrel tuners, these devices are simply weights which can be precisely adjusted as to their position in relation to the muzzle.

These days, tuners are most often seen on competition rifles where a high degree of accuracy is required, and the rifles used in Olympic-style competition. The Browning BOSS was a great example of this system, adapted to the needs of hunters. It combined a recoil-reducing muzzle brake with a barrel tuner. However, it’s no longer in production, I presume because its popularity faded, and eventually the lack of consumer interest killed it. Considering the current popularity of long-range shooting, I suspect this would be a good time for them to introduce an updated version.

The most effective, and therefore the most popular, muzzle devices for shotguns are the screw-in chokes we’re all familiar with. An entire cottage industry has grown up around the manufacture of these items, with a blizzard of options available to today’s shooter. We sometimes think of adjustable chokes as being a recent development, but the truth is they’ve been around for many years. The Poly-Choke was an early device that was gunsmith-fitted to a shotgun’s muzzle, and which could be dialed to the necessary choke constriction. It even included ports for recoil reduction. Although the Poly-Choke worked well, its major drawback was looks. The thing was ugly.

Today, flush-fitting, screw-in chokes are the universal choice for hunters. However, competitors in the clay-breaking shotgun games seem to prefer extended chokes which have a knurled portion protruding out beyond the muzzle. The longer, more gradual constriction these extended chokes offer is claimed to improve patterns. And because they are often colour coded, it’s easier to tell immediately which choke is installed.

An uncommon muzzle device is the bloop tube, the purpose of which is to increase the sight radius of iron sights, usually peep sights. Shooters use them because when using any type of iron sights, a longer sight radius always reduces shooter error in sight alignment and makes for more accurate shooting. These things significantly increase rifle length, are somewhat fragile and are the exclusive domain of competition shooters where the rules allow them. I see them most commonly in formal bullseye-type rifle competition, particularly in what we call Olympic-style shooting.

The media calls them silencers, but they’re not. Suppressors is the correct term, and they are, of course, prohibited for civilians in Canada. I’ve used them extensively when I was on the Queen’s payroll and while enjoying shooting events in the US, but I have never hunted with them. In my opinion, the real crime is that licensed gun owners aren’t allowed to use them at all here in Canada. However, if you’d like to install a fake suppressor on your rifle, that is an option. They are available from several online retailers and some even come with military-like markings, an important feature for collectors and re-enactors.

The ability to disrupt the muzzle flash from a firearm and therefore make it less visible to an adversary is an important reason for having a muzzle device on military firearms. Closely tied to this is the need for the soldier not to lose night vision as a result of the bright flash occurring in front of his face. Flash hiders assist with both functions, but they also help protect the muzzle from damage during the rough life of a military firearm.

I’ve known hunters to install them on their rifles for the same reason, simply to protect the muzzle from damage and assist in keeping out debris. Unlike muzzle brakes, flash hiders do not increase the noise level experienced behind the gun.

Perhaps the simplest muzzle device in existence is the wrap of tape many hunters put across the muzzle of their guns to prevent mud, snow, or debris from inadvertently plugging the barrel. You can even buy commercial products to do this, all designed to be shot through. But, of course, you don’t need a threaded muzzle to do this. Considering the wide availability of threaded rifle muzzles, I think accessory manufacturers are missing something in not offering a simple thread-on device which protects the muzzle from damage.

As you can see, the world of muzzle devices is huge. And with more rifles and shotguns arriving on the market with threaded muzzles every year, it’s easy to predict their popularity will only increase. Not all are suitable for hunters, but those that are can help protect a firearm’s muzzle from damage, reduce recoil, improve shotgun patterns and enhance rifle accuracy. If you buy a new rifle or shotgun today, expect it to come with a threaded muzzle, then give careful consideration to what accessory you’re going to attach.