A fuzzy solution to a long-standing challenge 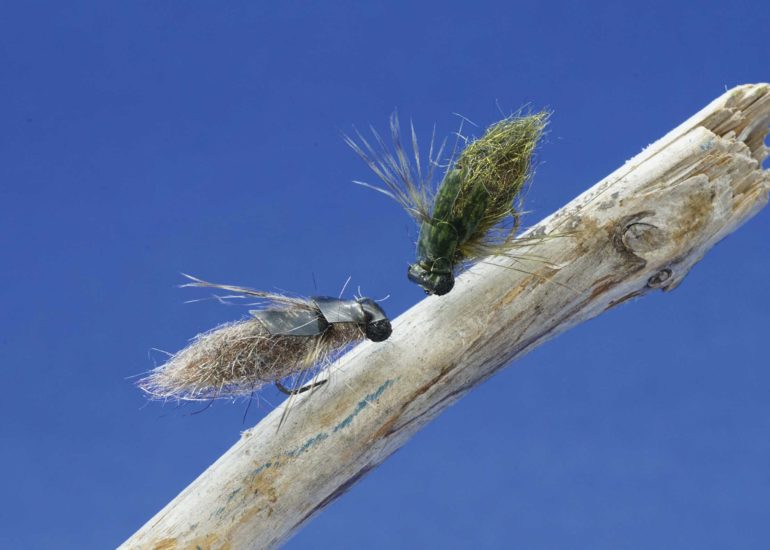 Dragonfly nymphs live and hunt in typically non-fly-friendly territory. Tough-to-fish areas, such as dense weeds, rocks and sunken woody debris are some of their favourite haunts. However, to be successful, it is essential to put your flies in harm’s way. With this presentation challenge, a weighted pattern doesn’t make sense as it spends the majority of its time snagging weeds, rocks and debris rather than catching fish. Buoyant flies fished on a fast-sinking line tethered to a short leader can be crept and skipped around and above weeds, rocks and sunken logs, reducing the risk of a hang-up while significantly increasing your catch rate.

Jim Crawford’s Gomphus is a popular dragon nymph pattern. The spun and clipped body of the Gomphus provides pattern buoyancy, but it is messy and time-consuming to tie. Foam-based flies seem an obvious alternative as they are less time consuming to tie, and foam is easier to work with. Premade foam bug or spider bodies, most often used for panfish flies, come in a range of sizes and seem ideal for dragon nymphs. Available in both slender and plump profiles, the slender profile is well suited to the larger Darner nymphs while the plump bodies better match the squat shape of a Sprawler.

From a tying perspective, the challenge is how to make a foam body more lifelike and convincing to a foraging trout. Permanent markers can provide mottled colour schemes to match the natural nymphs, but it isn’t the same as the natural translucency dubbing provides.

Gluing dubbing to the foam bodies seemed the logical way to solve this challenge. Unfortunately, almost all adhesives readily available to fly tyers won’t stick to foam. One of the most creative tyers I know, Matt King, figured it out. His Foam Dragon is an eye-catching pattern that looks complex to tie but is almost the opposite. Matt posted images of his Foam Dragon on social media. They created quite a stir.

After much trial and error, Matt found two types of cement that would stick and hold dubbing to foam: Angler’s Choice Soft Body and Dave’s Flexament. Soft Body is no longer available, but, thankfully, Dave’s Flexament is.

Matt’s process of gluing dubbing to foam is simple and straightforward. To ease handling, begin by stabbing a straight pin into the narrow end of the foam body. Matt prefers a 5/8ths-inch plump body for his dragon. Dip and submerge the foam body into the bottle of Flexament. Let the excess drip off. Lay the coated body in the centre of a round clump (approximately one-and-a-half-inch diameter) of short fiber-length dubbing, such as Arizona Synthetic Peacock.

Wrap the excess dubbing around the dubbing like a fajita. Set the now-dubbed foam body aside to dry. Once dry, remove the excess dubbing using a tooth or Velcro brush. Matt states that short-fibered dubbing, such as Synthetic Peacock, combs out better than long strand dubbing blends. The process is easy to master, and Matt recommends a production-style approach by creating several bodies at once.

Matt’s Foam Dragon features two Thin Skin wing cases. Thin Skin is a pliable transparent sheet material featuring a matte finish on one side and a shiny finish on the other. It is packaged on a removable paper backing, making it easy to cut and shape to a range of dimensions. The first wing case resembles a fence picket, while the second features a tapered point at one end and a distinct V notch in the other. As with the foam bodies, Matt cuts and trims a number of wing cases at a time to speed up the tying process.

A pair of foam eyes provide additional floatation, function and form to Matt’s dragon. Start by trimming a two-millimetre by two-millimetre, one-inch length of black sheet foam. Figure-eight wrap the foam strip just behind the hook eye after tying in the first wing case. Fold each end of foam strip back against the hook directly behind the initial tie-in point to form a natural pair of rounded eyes. Add a few additional wraps of thread for added security and trim the excess foam.

To mount the body, Matt stabs a barbless scud hook into the narrow end of the body, pushing it around the hook bend and onto the shank, leaving enough space for a short thorax and head. To help lock the body in place, cover the shank with thread and cover it with a thin coat of superglue prior to stabbing the foam body onto the hook. This practice provides a solid foundation, locking the body in place.

A cross-section of dragon nymphs should be common to every stillwater fly box. Dragon nymphs are usually large and, for many, are a great confidence pattern, especially when fishing is tough or when prospecting a new lake. King’s Foam Dragon, tied in a variety of colours to match the surrounding bottom and vegetation colour, inspires angler confidence as it just begs to be eaten. Have a solid grip on your fly rod, as takes are typically savage.

How To Tie King’s Foam Dragon