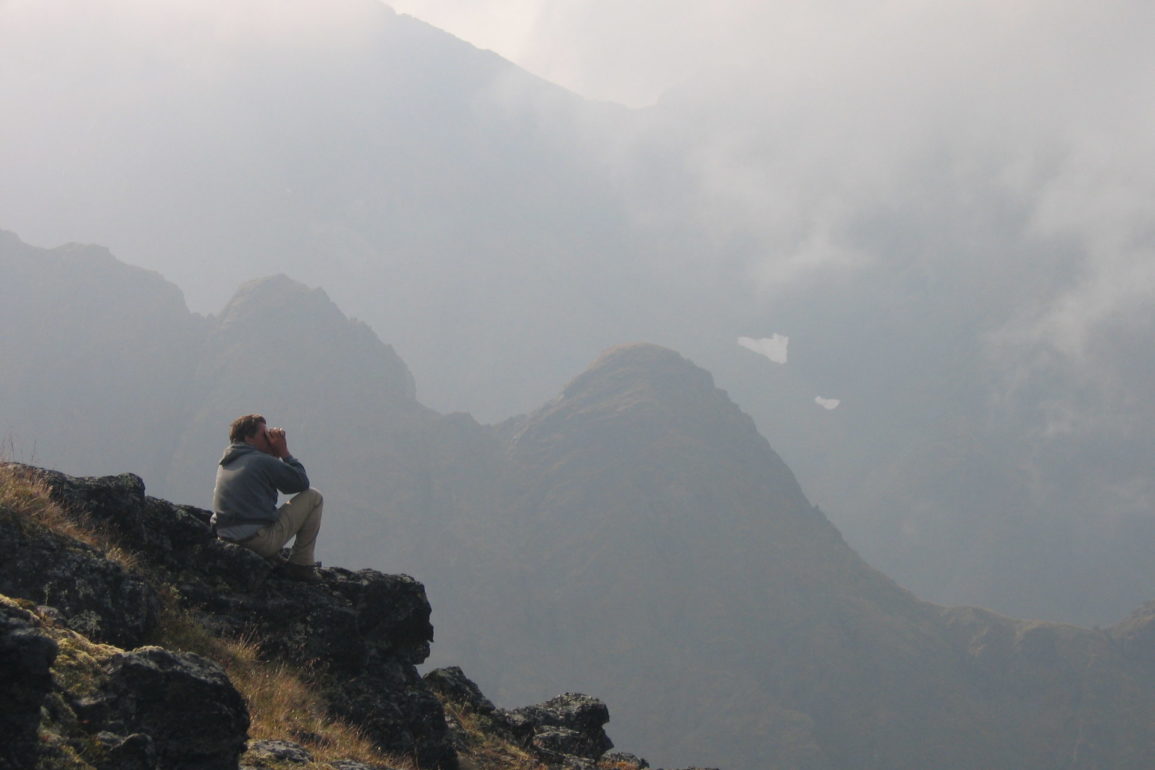 Getting Stoned: On the Hunt in Stone Sheep Country

Our pilot asked us if we’d mind all joining hands and saying a prayer together before we took off in the tiny Cessna. Anywhere else this would have been concerning, but in northern British Columbia it all seemed pretty normal.

In sheep country, rapidly changing weather, high-mountain passes and questionable landing sites all compound the normal dangers of flying in the bush. As we climbed into the plane, I took the right front seat and all across the dash were inspirational sayings, printed out with a Dyno labeler. The one that really caught my eye was, “Don’t be stupid.” While it seems common sense, it never hurts to be reminded in Stone sheep country, where one lapse in judgment can quite literally cost you your life. I once wrote an article on Canada’s 10 most dangerous hunts and I placed the British Columbia Stone sheep hunt at the top. I still stand by that. While the weather, terrain and modes of transportation all add to the danger, it’s the desire to push ourselves harder and further when we hunt sheep that can ultimately be our demise. While it’s easy to glass a mountain goat on an impenetrable crag and walk away in search of another, for the dedicated sheep hunter, those ingrained survival skills give way to desire; desire to harvest the pinnacle of North American sheep. When you first lay eyes on a mature Stone ram through the spotting scope, it’s a good time to remind yourself, “Don’t be stupid.”

My first Stone sheep hunt was a classic horseback hunt in the mountains north of Hudson’s Hope. I was hunting with legendary sheep guide, Garry Dowd, and while my mountain experience was extensive, this was my first foray with a full-on pack string. Garry had successfully guided more than 50 Stone rams at that point, and he knew as much as any man alive about hunting them. But, his skill as a guide was overshadowed by his skill as a horseman. I’ve been around horses virtually all my life, but I felt like a greenhorn around Garry. I eagerly lapped up his knowledge as he patiently answered all my questions and repeatedly showed me all the tricks and knots for securing loads for long packs through challenging terrain. In Garry’s mind, the ultimate failure was having to repack a horse along the trail. We had no failures.

It didn’t take me long to learn that Stone sheep range is extensive, and it can be a day’s ride between one Stone sheep mountain and the next. Horses were definitely key, especially where ram densities were low. I’d booked a 14-day hunt, and by day 12 it was looking pretty bleak. The weather is the greatest enemy on most sheep hunts and this one had been no different. In those 12 days, we’d had two or three good glassing days and I was resigned to going home empty handed. Looking back on it, I’m not sure if failure would have left me so dejected that I would have given up on Stone sheep, or if it would have made me more determined, but Garry was not a man to fail. He had a break before his next hunters flew in, so he suggested we check out one last basin, a long day’s ride from main camp. We still had six days before his next hunters arrived. We headed back to main camp and after taking a day to rest and resupply, we head off with four days’ worth of supplies.

Now, you have to appreciate that this was long before the days of satellite phones and the best we could do was leave the pilot a message that we’d be back at camp on or before hunter change day. I had family in the outside world expecting me back and hopefully the pilot would relay the message, but desire was rapidly overcoming common sense. Garry warned me that the ride in was long and not without peril. It was early October and we were already pushing the season to make it through a high and often snow-choked pass. If it snowed more, we’d be trapped on the far side of the ridge and facing a four-day ride out to the highway. We elected to travel light with two riding horses and two pack horses.

It rained the entire way, other than at higher elevations, where heavy, wet snow blanketed us. As we crested the pass late in the afternoon, there was already a foot of snow and it was accumulating fast. Pressing on was not the prudent thing to do. We pressed on! It was well after dark when we arrived at a small meadow with enough grass to hold the horses over for a few days. We set up our tiny tent and settled in for the night.

Low clouds enveloped the valley for the next two days, reducing visibility to mere yards at times. There was little to do but sit in camp and tend the tiny fire. I grew more pessimistic with each log we added. It wasn’t until the morning of day 16 that we awoke to bluebird skies. Temperatures had dipped into the minus double digits during the night and it took us a couple hours to get the saddles thawed out and the horses tacked up. This was our final day to find a ram.

It was late in the afternoon when Garry finally uttered that one single word that I’d been waiting 16 days to hear, “Ram!”

The actual stalk was fairly textbook and just before the sun set on our final day, I put a 140-grain bullet from my 264 Winchester Magnum in the ram and my dream became reality. When we arrived back at our tent late that night, I was extremely hungry and thirsty, so I eagerly drank from the tiny stream and inhaled a can of lukewarm beans. I promptly vomited them up, the water feeling as cold coming up as it did going down. My body was telling me I’d pushed too hard. I was beyond listening and ate a second can of beans. This one stayed put. Even the 16-hour ride out the following day in the rain and snow did little to quell my enthusiasm. One hunt was definitely not enough. I was hooked on Stone sheep hunting.

I was ready to do anything to feed my addiction after that, and I managed to go along on several more hunts as a cameraman. Some were successful and some weren’t. Of all the North American sheep hunts, the Stone sheep hunt comes with your lowest odds of success. It’s far from a guarantee. I’d also rate Stone sheep hunting as the most difficult. Unlike the snow-white Dall rams that are easily spotted from miles away or the majestic bighorns that love to laze away the afternoons in high, lush basins, more often than not, Stone rams will be found in the willow and alder-choked slides where their dark coats allow them to blend in perfectly. Finding Stone sheep is tough and takes considerably more glassing to locate than any of the other sheep. I remember sitting in a remote backpack camp one time for three days, doing nothing but glassing and it wasn’t until the third day that we spotted rams. I have little doubt they were there the entire time, but it just took that long for us to get one brief glimpse. But, in the end, that was all we needed. Our hunter put the ram down the following day, only a few yards from where we’d first spotted him. The thick willows were a labyrinth of trails and sheep droppings were everywhere. It was easy to see why we hadn’t spotted them earlier.

In addition to Stone sheep being hard to spot, their range is vast. I had the opportunity to film a hunt right up on the Yukon border and in 21 days we literally covered hundreds of miles and it was typically a 20- or 30-mile ride between sheep mountains. We always seemed to be just a day or two behind the rams, as sign was abundant, but it was never fresh. This was a true old-school hunt and we had over 20 head of horses. Just packing up the horses to move camp took all morning and it wasn’t something done lightly, but we ended up moving camp five times.

It was on our first day riding out of camp five that I looked up to my right as we made our way through a pass, that I noticed two rams. They were about 400 yards away but even with the naked eye, I could tell that one ram was truly exceptional. A 40-inch ram is the holy grail of Stone sheep and this ram was easily that. Remembering a trick I’d read in one of Andy Russel’s books, I suggested that our hunter and one of the guides dismount and hide in the trees, while I lead the horses down the pass in full view of the rams. I rode about a kilometre, making sure the rams could still see me as I tied the horses to some trees, in plain sight.

While the rams kept their attention focused on me and the horses, the guide and hunter were able to slip up the relatively open hillside undetected. At under 200 yards, our hunter made a perfect shot, dropping the ram in his tracks. This was without question the most magnificent ram I’ve ever laid my hands on. It was the kind of ram that does little to quell the addiction, but rather it just feeds it.

Like most addictions, Stone sheep hunting comes with plenty of suffering and discomfort for those short periods of euphoria. I’d like to take one more Stone ram for myself, but he’d need to be something really special. If I don’t, I won’t feel less fulfilled as I’ve had the good fortune to chase these magnificent rams across virtually all of their range in British Columbia and into the Yukon. Until then, I’m happy to share the experience with others. It’s hard to explain to those that have never done it, but sheep hunting is not about being the actual one to pull the trigger. It’s about sheep hunting. And there is no better hunt than that of the Stone ram.

You will be sent an opt-in email to confirm that you would like to receive emails from us. By signing up for our newsletter, you agree to our Privacy Policy and Terms of Service. You also agree to receive email updates on new posts and offers. You can unsubscribe at any time by clicking on the "Unsubscribe" link at the bottom of every email.

And keep up-to-date with BC's fishing and hunting authority!
You will be sent an opt-in email to confirm that you would like to receive emails from us.