Craft fur is a durable synthetic material that breathes and flows in the slightest current or under the subtlest of retrieves. It is an ideal tail and wing material, especially for baitfish patterns. You can use craft fur in several ways: tie it in as a wing or tail, insert the fur or underfur into a dubbing loop, you can even cut the backing into Zonker strips. 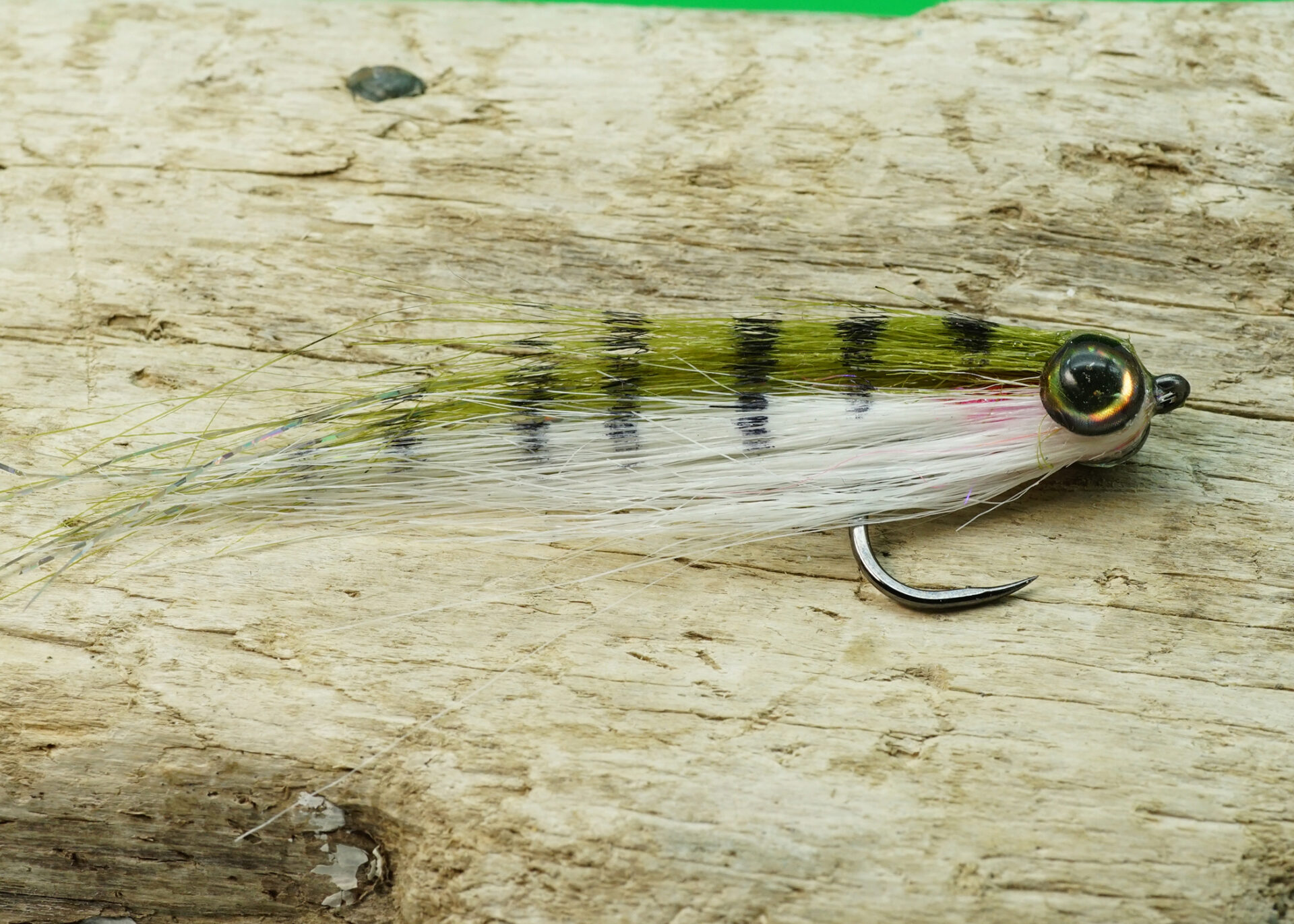 The fur is attached to a cloth, hide-like backing and is available in a wide range of colours, from bright fluorescents to mottled schemes. You can also use permanent markers to add features such as gills or dark vertical barring.

Despite its appearance, craft fur fibres have no taper. The taper is an illusion created by the staggered lengths of the fibres on the hide. In reality, the fibres are the same diameter throughout. If needed, you can trim a clump in half and use both ends.

Before trimming a clump from the hide, comb the fur using a pet flea or mustache comb to remove any tangles and align the fibres. Lift the fibres vertically. Slide the scissor tips against the backing, as you would with natural deer or elk hair, across the grain of the fur, from the side to isolate a section. Keep your scissor blades close together to ensure a narrow width. For a sparse application, use a short cut. Use a longer cut to remove a dense section. Once trimmed, roll the fibres into a clump. Pinch the tips tightly and carefully remove the underfur using your fingers or a fine-tooth comb. Don’t be too aggressive, or you could accidentally pull the clump free.

Save the underfur, as it makes excellent dubbing. If you plan on using lots of craft fur, specific synthetic scissors are a wise option. As with most synthetics, craft fur soon dulls standard scissors.

The craft fur minnow is simple to tie. It features a long craft fur tail and two wings. A typically dark upper wing that flows over the hook and onto the tail, coupled with a lighter lower wing that flows along the hook’s underside, resulting in a neat natural tapered baitfish pattern.

After trimming a sparse clump of craft fur from the backing, remove the underfur. Rearrange the fibres to align the tips, while still maintaining a natural-looking taper. Secure the craft fur clump just back from the hook eye, back down the shank to provide an even body foundation. The finished tail should be two to three times the length of the hook. If you wish, you can work a sparse amount of thin UV resin into the tail base and cure it. The resin base stiffens the tail, reducing the risk of it fouling around the hook bend. With the tail in place, dub a slender body. A contrasting body colour bleeds through the wings, providing a convincing look to the fly.

Reverse tie in the wings by securing in two clumps of craft fur that are about the same length and volume as the tail, one on top of the shank, the other on the underside, so the tips point forward out in front of the hook eye.

Work the fur around the shank before binding it in place. The top wing section occupies the upper half of the shank, the lower wing along the underside. Many craft fur minnows feature two contrasting wing colours. Some tyers add additional colours to further compliment the fly. With the wings tied in, tie in a sparse amount of Flashabou or Crystal Flash just behind the wing tie-in area. Secure the flash over the body. Stagger cut the flash, so it shimmers throughout the finished fly.

With the wing sections in place, advance the thread forward to the hook eye. Sweep and hold the wings back over the hook and tail. Build a neat, tapered thread dam directly in front of the wings to push them back. Moisten your fingers and sweep the fur back a few times to train and coax the fibres back while trying to keep the two colours from mixing. Don’t worry, the wings rarely lay back over the body and tail. Avoid the temptation to secure the wings back using the tying thread.

With the wings more or less folded back, massage a small amount of thin-viscosity UV resin into the head area only using your fingers or a dubbing needle. Hold the wings in position to match the baitfish profile you are trying to suggest. Once you are satisfied, cure the resin to lock the wings in place.

To finish the fly, use gel Superglue to affix a pair of eyes just back from the hook eye. Coat the head area with UV resin to encapsulate the eyes, so they stay in place.

How To Tie A Craft Fur Minnow