A Home Where The Bison Roam: Wood & Plains Bison

When is a buffalo not a buffalo? When it is a North American bison – which is not a buffalo, although on this continent, the two names have often been considered interchangeable basically since the European settlers first arrived. True buffaloes are native to southern Africa (cape buffalo) or south Asia (water buffalo) and bison are native to this continent. North American “buffalo” are either wood bison (Bison bison athabascae), currently most commonly found in Wood Buffalo National Park, or plains bison (Bison bison bison) found in small numbers across western North America. At one time, plains bison numbered in the tens of millions, but unrestricted slaughter and habitat loss reduced them to a few hundred animals by 1900. With protection, that race has recovered somewhat to about half a million animals. Wood bison, as the name suggests, find their home in grassy openings in northern forests. They were never as common as their prairie relatives, but they too were nearly extirpated a century ago and have made a modest recovery. Both races of bison are found in the wild in northeastern BC. There are several small herds of wood bison near the borders with Yukon and Alaska, and a relatively large (1,500 animals) population of plains bison. The latter herd developed from escapees from a ranch near Pink Mountain, north of Fort St. John. So, you might still call a bison a buffalo, but now you know that is not correct. 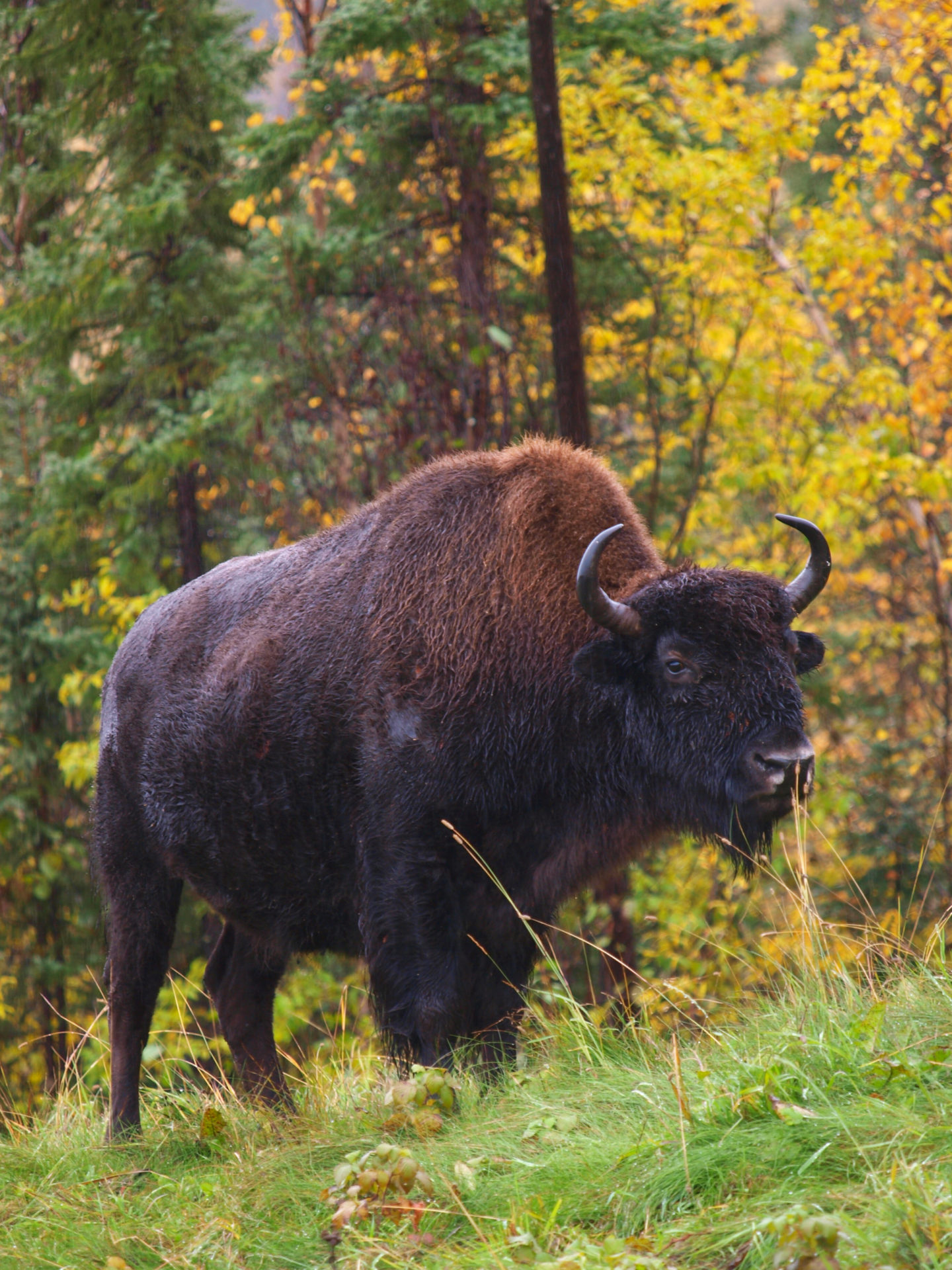 Both bison and buffalo and a couple of other related species in Asia belong to the family Bovidae, which includes modern beef and dairy cattle. These animals had a common ancestor long ago in southeast Asia, but the buffalo and bison lineages diverged between five and 10 million years ago. During the ice ages, over the past 300,000 years, when a land bridge connected Asia and North America via what is now the Bering Sea, many Asian species, including the now extinct steppe bison (Bison priscus) found their way to this continent. Once here, several intermediate bison species evolved and culminated about 3,000 years ago in the two races of American bison. It seems that there was a lot of interbreeding, though, among the early members of the cattle family, such that modern bison may be more closely related to the yak of the Himalayas than to some species of buffalo.

Bison eat grasses almost exclusively, so much of BC, being steep, rocky and heavily forested, is not suitable habitat. However, bison are incredibly adaptable – the same species lives in the desert of the southwestern US and the muskeg of northern Canada. The Rocky Mountains are generally considered to be the western limit of historic bison range, but a few must have found a pass through. There are bison fossils from the Peace, the Kootenay, but also as far west as Atlin in the north and Vancouver Island in the south. So, fossilized ancient bison bones may yet be waiting to be discovered in other places in BC.

Bison are the largest land animal in BC and really cannot be mistaken for anything else. Bulls weigh up to 1,000 kilograms, while cows are just over half that size. The front half of a bison is massive and seems out of proportion to the more delicate-looking hindquarters. The big head, neck, and huge shoulder hump are all covered with long, shaggy, brown hair, while the short hair on the hind half is a pale red-brown. Both bulls and cows have beards and capes of long, dark hair that on bulls extends to their knees, giving the appearance of chaps or pantaloons. Both sexes grow horns that are sharp, black, relatively short and curving inward.

BC bison live mostly in remote and rough habitat, so they are not easily viewed. For hunters, there is popular LEH to harvest a plains bison. This is an opportunity for a great hunting story and a lot of good meat, but it is not a gift. This is an adventure hunt. The odds of being drawn are long, and the hunts are scheduled in late fall and into the winter, so only the best-prepared hunting parties succeed.

So, while it is true that if a singing cowboy wants to be given “a home where the buffalo roam,” he’d have to move to another continent, but if he wants to see where bison roam and he is prepared for a wilderness hike, then northeastern BC is a good bet.