With a century-and-a-half of manufacturing firearms behind them, Franchi, an Italian company, unveiled their first centrefire hunting rifle – the Momentum. Best known for their value-priced, Italian-made shotguns, this may well have been a leap of faith for Franchi, as the Momentum is entering a highly competitive market. Its price point should, however, appeal to a lot of hunters. My first look at this rifle was during the 2019 Las Vegas SHOT Show where, after some rudimentary handling, its features, fit and modernistic design piqued my interest. It could be said that a rifle is a rifle, but, as every enthusiast will tell you, that is simply not the case. The differences in calibre and design alone will dictate these variances. So, let’s see what attributes the Momentum has to offer. 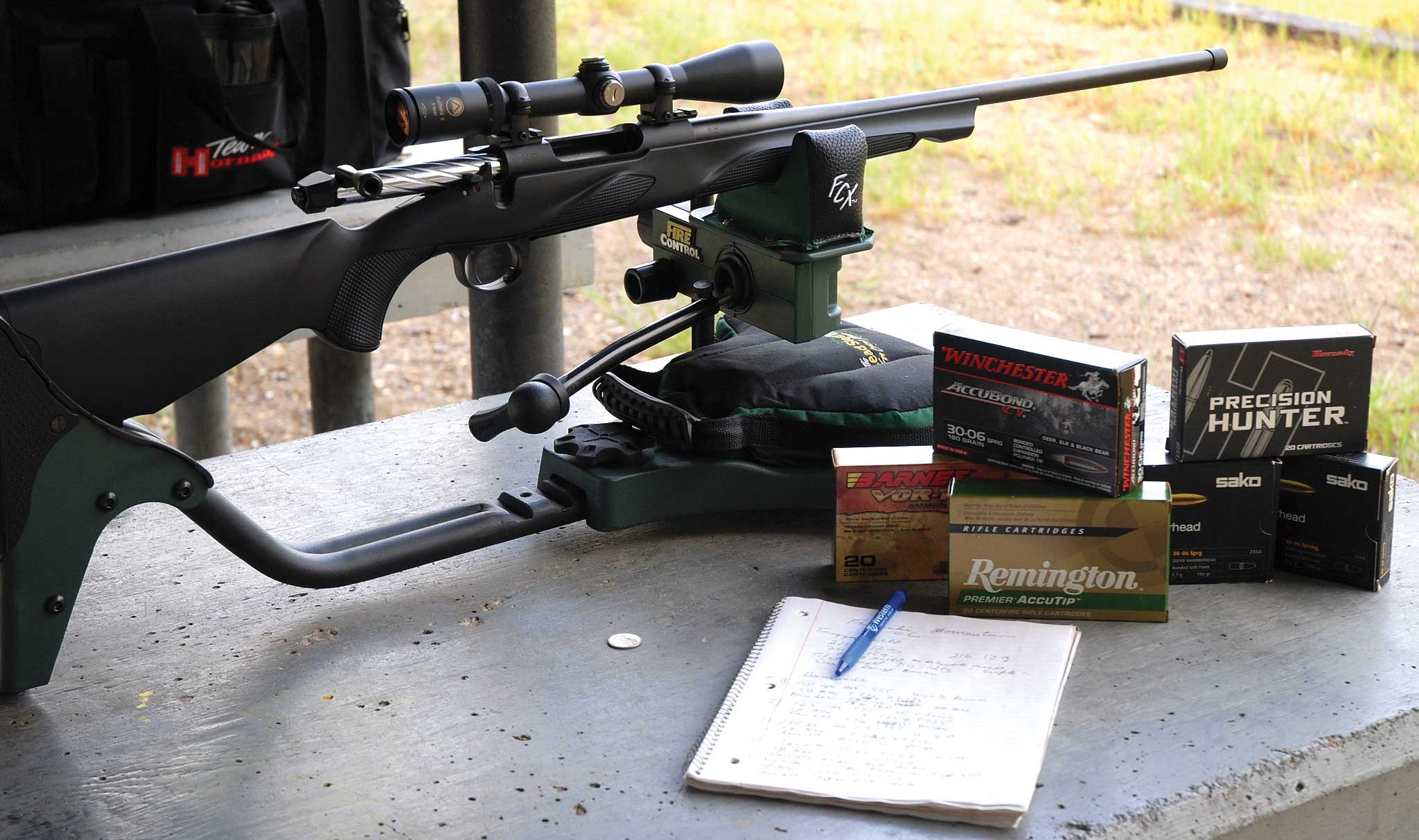 While the Franchi is unquestionably priced to sell, it does not shrink on value. Most immediately notable is the Momentum’s synthetic stock. While its rigid polymer construction is standard fare, the design is not. It has a degree of class and styling that one does not normally find on a value-priced rifle. Its ergonomics, which include contouring, are appealing and its crisp, checkered pistol grip, forearm and area over the magazine box offer a firm grip in five of the most common shooting positions. The pistol grip is also a bit thicker than on other standard stocks. While the stock’s TSA recoil pad is said to reduce recoil by 50 per cent, it also offers recessed swivel attachments and a checkered recess at the bottom rear of the buttstock for hand placement when shooting off the bench, the latter being a concept normally not seen on standard hunting rifles.

Mechanically, it has a chrome-molybdenum free-floated, cold hammer-forged precision barrel that on most models is threaded for attachments such as a muzzle brake; a one-piece three-lug fluted bolt; adjustable trigger from two to four pounds; a short, 60-degree bolt lift; easy bolt disassembly; and a two-position safety that allows the hunter to remove a cartridge with the safety on. The original test rifle has a hinged floor plate – see the test section for additional information.

The Momentum arrived with a Burris Fullfield ll 3-9x40mm scope, rings and bases. The latter I will discuss in the test portion of this review. The Fullfiled ll scope, to quote Burris, is their “workhorse,” being the most recognized and awarded scope in their lineup. At a modest price, it offers high-grade optical glass; precision-ground lenses that are larger than comparable scopes; index-matched Hi-Lume(r) multicoating for low-light performance and glare elimination; durable integrated eyepiece design with no-slip grip for easy field adjustment; positive steel-on-steel adjustments for repeated accuracy; durable, stress-free, one piece one-inch tube; it’s waterproof, and nitrogen filled to prevent fogging. It also comes with Burris’s Forever Warranty.

Note: As of this writing, I was informed by Burris that they are in the process of replacing the ll with a new Fullfield lV. I’m sure either would be an ideal match for the Momentum.

Once the Burris scope was mounted, I set about checking the trigger pull, which, for the value-priced Momentum, was better than expected. With no creep, the pull weights varied ever so slightly between two pounds, 12 ounces, and two pounds, 13 ounces. I then weighed the rifle, scope and mounts for a combined weight of seven pounds, 12 ounces. Quite reasonable for a hunting rifle.

Unfortunately, my first trip to the range did not go as planned. At 20 yards, there simply was insufficient windage adjustment to put even a single round on target. Thankfully, I had a set of smithy tools with me to at least root out the problem, which in this particular case turned out to be base holes drilled off centre. When measured, the front hole on the rear base was .01 out of alignment and the front hole on the front base was .008 off centre. To solve the problem, I simply dug into my supply box and utilized a set of Remington Rem 700 integral mounts, which did the trick very nicely.

On the range, both the scope and rifle performed as expected with no notable issues. The rifle cycled well, and I liked the short bolt lift for a quick cycle and, while I found the two-position safety as advertised, I just happen to prefer a three-position safety, which eliminates the possibility of the bolt accidently opening when on safe. I also noted that while the recessed swivel attachments provided a cleaner look, they did not allow for the mounting of a bipod or other type of attachment. The stock itself fit well and I had little difficulty with eye-to-scope alignment.

With a dozen rounds or so under my belt, I felt it wise to test this rifle with and without a muzzle brake. My thinking here was to provide recoil-sensitive shooters with details on accuracy and potential recoil reduction with and without a muzzle brake. My original, non-brake test was to include four handloads and 14 factory loads. The brake test was to include seven additional factory loads, for a combined total of 21 factory loads and four handloads, collectively covering a wide variety of manufacturers and bullet types from 150 to 180 grains.

Note: The new 2020 model has a clip magazine and Franchi has drilled a small hole (capped with a rubber stopper) in the forearm just back of the front swivel attachment in order to provide for the addition of a front swivel stud and the subsequent mounting of a bipod. Franchi was no doubt listening to its customers.

Note: all groups are three shots at 100 yards

Starting with the impact of the muzzle brake, my unsophisticated diagnosis put recoil reduction at about 50 per cent, accompanied by a notable reduction in muzzle jump without any loss in accuracy. The first 14 factory loads tested without a brake averaged 1.288 inches, whereas the seven factory loads with the brake averaged 1.260 inches. Virtually the same. My handloads averaged just a tad better at 1.022 inches. For a hunting rifle, this is quite respectable accuracy. However, as with many a rifle, there were some winners and losers. As far as winners, six factory loads grouped into under an inch, as did two of my handloads, with the best topping the lot at .608 inches. This being my best group and wanting to ensure it was not an anomaly, I fired a fourth shot, which opened the group slightly to about an inch. Four shots into an inch – more than satisfactory. For deer-sized game, I would choose either my handloaded 150-grain Hornady SSTs with Winchester 760 powder or Barnes VOR-TX 150-grain Tipped TSX BT factory. And for larger game, I would choose either Federal Premium 180-grain Trophy Copper or Winchester Expedition Long Range 190-grain AccuBond factory. All shot well with quality game bullets.

Brake or no brake? As a hunter or shooter, whether recoil sensitive or not, my choice here would be to include the muzzle brake. On the range, it will keep you shooting flinch free longer and, in the field, the reduction in muzzle jump will afford a much quicker on point second shot. But I do so with a word of caution: hearing protection is a must.

For the price range, this is a well-designed rifle that performs, fits and handles well. Franchi no doubt put a lot of thought into the Momentum’s design and construction. A solid success.